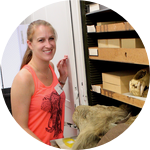 I have a doctorate in population & conservation genetics from the interdisciplinary program of Genetics at Texas A&M University. My dissertation was research on biodiversity of the African lion. At Texas A&M, I took on leadership roles and strove to be an active member of the academic committee regularly attending program & departmental seminar series. I have done both oral and poster presentations at national, local and University-level conferences and symposia. I have received multiple awards through the University and College of Veterinary Medicine, such as being a recipient of the Graduate Student Research Trainee Grant. I am a participating member of multiple graduate student organizations. I have been an officer for the Genetics Graduate Student Associate as a website committee member, the head of recruitment, and Vice-President. I have a Bachelor of Science from the University of Washington (2006) in Psychology with a focus in Animal Behavior and Cognitive Neuroscience and a minor in Anthropology. After graduating, I traveled to the Amazon (2006), visited the Wildlife Conservation Research Unit at the University of Oxford in England (2007), became a certified dog trainer through the Animal Behavior College (2007-2008), and obtained an equivalent to a bachelor’s in biology from taking courses at various universities in Southern California (2009-2011). In addition to travel and education, I was a volunteer researcher for over five years (2007-2012) for the San Diego Zoo’s Institute for Conservation Research participating in studies on various species of bears, birds, elephants, and local fauna. I was the zoo’s primary research assistant for two studies on the giant panda implemented in association with Mississippi State University. I have also been working with the Cheetah Conservation Fund since 2005 through research, outreach and fundraising.

How have genetics of African Lions changed over the last century?

This evening, there was a bit a glitch or something and a message was sent to everyone saying the project became fully funded when we were $1,241 short of our goal. We are still in need of backers ...

The Century of Lions Project has gotten some great news this week. Today we received 30 lion specimens from the Field Museum of Natural History! This brings us to a grand total of 12...

August of 2015, Dr. Derr and I went to New YorkCity where we got to delve throughcabinet after cabinet and shelf after shelf of animal bones digging forancient DNA treasures at the American Museum ...

53
0
0
Thanks so much for contributing!
How have genetics of African Lions changed over the last century?
View comment