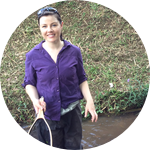 I received my B.S. in 2009 and M.S. in 2012, both from the University of New Mexico. My master’s thesis was on the role of young-of-year fish in arid river food webs. After a brief stint as a technician at Texas A&M University, I am now in the third year of my Ph.D. at Wayne State University in Detroit.

I initially became interested in the conservation of fishes while completing my undergraduate degree. Studying aquatic organisms in the desert, conservation is a natural part of the discussion. While many interests are at stake when thinking about conserving water resources, it is easy to forget that humans are not the only ones who rely on sources of freshwater.

When I moved to the Great Lakes area to pursue my Ph.D., I found the focus of conservation was quite different, but the underlying principles are the same - conservation of native biotas benefits ecosystem health in addition to municipal and recreational interests. In this part of the country, invasive species are one of the largest threats to freshwater ecosystems. The Great Lakes now have over 180 introduced species. With the overall goal of conservation of native biotas in mind, I hope to contribute, at least in some small way, to better management of invasive species.

Exploring the temperature tolerance of a cave beetle