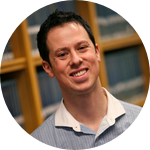 Professor of Mathematics Chad Topaz (A.B. Harvard, Ph.D. Northwestern) is an applied mathematician at Macalester College. His research in nonlinear dynamics, pattern formation, and complex systems has been supported continuously by the National Science Foundation since 2006. Chad's honors include a New Directions Research Professorship at the Institute for Mathematics and its Applications (the first given to a liberal arts college faculty member), a Kavli Frontiers Fellowship from the National Academy of Sciences, a Board of Trustees Award from Macalester College, and the 2013 Outstanding Paper Award of the Society for Industrial and Applied Mathematics, given to three publications selected from the pool of 16 SIAM journals over the prior three years.

Chad's teaching career stands on an intense passion for human learning, on scrupulous attention to learners’ needs and challenges, and on the belief that education is both an art and a science. He has won UCLA's Robert Sorgenfrey Distinguished Teaching Award in mathematics and Macalester College's Rossmann Excellence in Teaching Award. With teaching interests including calculus, scientific computing, differential equations, mathematical modeling, and complex analysis, Chad also has created a seminar for first year students called "Death, Devastation, Blood, War, Horror, and Mathematics." One of his greatest fulfillments has been the melding of his teaching and research lives in the sphere of undergraduate research. He has advised over 70 summer research, capstone, independent study, and honors experiences, with approximately 50% of these for women and members of other underrepresented groups. Chad has been invited to speak about curriculum and/or pedagogy to audiences such as the Annapolis Group, the New York Six Colleges, the Associated Colleges of the Midwest, the Minnesota Private Colleges Council, as well as numerous college and university mathematics departments.

I am completely, utterly, totally excited to announce that the work funded by this Experiment.com project was published today:http://journals.plos.org/plosone/article?id=10.1371%2Fjournal.pone.0161...

Sorry... Last lab note may have had an erroneous link! I have fixed it now, and will resend the proper link here:https://dl.dropboxusercontent.com/u/6157322/Web/TopSen2016.pdf-Chad

Dear all,Shilad and I are incredibly excited to let you know that we have completed our project and submitted it for publication. You can find the preprint here:https://dl.dropboxusercontent.com/u/...

Dear all,Momentarily, I will give you some exciting results! But first...Thank you again for your interest in our project. If you have backed our project, please know that we appreciate your genero...

Dear all,Bad news and great news. The bad news: this past week, my daughter (who loves math) caught a nasty stomach bug and had to stay home from school. So I stayed home from work to hang with her...

Dear all,About 2.5 weeks ago, we launched our funding campaign to raise $6000. About 1.5 weeks ago, we met our goal. And because of your incredible generosity... data collection is now complete!It ...

Help us cross the finish line

Dear backers,One week ago, Shilad Sen and I launched this funding effort with great enthusiasm. Though we are optimists, never in our wildest dreams did we imagine that in just one week we would re...

Dear backers,We are just floored that in 4 days, we've reached nearly 50% funding of this project. This is due entirely to your amazing generosity. We are in the process of thanking each of you, in...