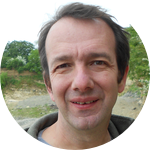 Tooth plates in chimaeras and their relationship to teeth in sharks

Dear All,We have just had an open access paper on the tooth development of squaliform sharks come out, and i hope you find it interesting; if nothing else the photos are goodhttp://rsos.royalsociet...

I also got a few specimens of skates. This is a mature male (with huge claspers) of Amblyraja radiata- possibly the commonest skate in the cool waters of the North Atlantic. We have...

The oddities at the bottom of the sea

As well as heads of the five known UK species of the deepwater catshark Apristurus, there were 2 whole specimen that did not really well match any of them. Are they simply extreme f...

I have now been up to Aberdeen and brought back the specimens that Francis Neat so kindle collected. I had to explain to the lady in the airport that the box going through the X-Ray...

As well as looking at modern sharks I have been looking at some important fossils. This is a fantastic fossil of an early ray from the Late Jurassic of southern England. This incidentally is part o...

No updates for a while I am afraid, but I have not been completely idle. The Scotia is currently cruising the cold grey seas north of Scotland and will hopefully catch the chimaeras needed for this...

A fishy thank you to everyone

It looks as if we have reached the target and i with to offer by fullest thanks to everyone who has helped out. Chimaeras are not the prettiest of fish i grant you, and my lab freezer will never sm...

Sorry for not being able to do any updates here for a while. I have been in Montenegro supervising some student projects, and did not even get a chance to get to the fish market whilst I was there....

The deep water trawls that have produced the chimaeras also brought up some other deep water goodies. Here is a couple of heads of a very poorly known deepsea shark, Apristurus melanoasper. These l...