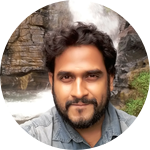 My name is Dinal Samarasinghe, my work initially focused mainly on reptiles and amphibians. Over the last 10 years I have conducted research on anuran bioacoustics, varanid taxonomy and have also taken part and led several biodiversity surveys in vulnerable forests across Sri Lanka. Currently my research focus is on human-animal conflict mitigation and monitoring carnivore/apex predator populations.

In 2012 I initiated an extensive three-phase study assessing the human-crocodile conflict in the Nilwala river, Sri Lanka. Working closely with the local community and policy makers I studied the background, history and social perspective of the conflict between humans and crocodiles. Several short-term and long-term solutions were proposed and implemented following the end of the project.