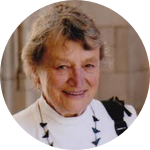 About
Estella Leopold is a University of Washington professor emeritus of botany, forest resources and quaternary research, and has been teaching and conducting research for more than 60 years.

The author of over 100 scientific publications in the fields of paleobotany, forest history, restoration ecology and environmental quality, Estella pioneered the use of fossilized pollen and spores to understand how plants and ecosystems respond over eons to such things as climate change. Her work at the Florissant Fossil Beds in Colorado made the case for the necessity of their preservation, an achievement which contributed to Estella’s receipt of the prestigious International Cosmos Prize in 2010. She was elected as a member of the National Academy of Sciences in 1974.

Estella serves on the board of the Aldo Leopold Foundation as lifetime director and lives in Seattle, Washington.

A fossil leaf site west of Ellensburg: part of the Ellensburg Flora? Or its own thing?