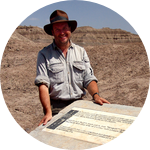 Eric Scott is Associate Curator of Paleontology for the Dr. John D. Cooper Archaeological and Paleontological Center in Santa Ana, California, where he has worked since 2015. He is also an adjunct lecturer in biology at California State University, San Bernardino. He studies the evolution and extinction of Ice Age large mammals in western North America,with a strong emphasis on extinct horses and bison. Eric’s studies include both field and museum work throughout the western United States as well as Mexico and eastern Africa, and he has authored numerous paleontology research articles in books and professional scientific journals. He is a 30+ year member of the Society of Vertebrate Paleontology, an international
society of professional scientists, where he currently serves on the Government Affairs and Communications Committees. Eric is also an Associate Editor for the Journal of Paleontology.

Prior to his present position as Associate Curator, Eric was Curator of Paleontology for the San Bernardino County Museum in Redlands, California, where he worked since 1991. Prior to that, he was Chief Excavator at the Rancho La Brea “tar pits” in Los Angeles from 1985 - 1991. He graduated from the University of California, Los Angeles in 1990. Eric presently lives in Bloomington, California with his wife, Kim, who is also a paleontologist. He has no sense of humor.