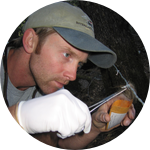 Dr. Hopkins is a carnivore ecologist with over 15 years of experience using noninvasive sampling and stable isotopes to inform wildlife management programs. He earned his PhD from Montana State University studying the foraging behavior of black bears in Yosemite National Park using DNA and stable isotopes. Since then, he has studied a variety of species, including critically Endangered Mediterranean monk seals, Threatened grizzly bears, protected humpback whales, hunted ducks, and invasive rats. Currently, he is using DNA and stable isotope analysis to investigate the causes and consequences of diet variation in brown bears in Slovenia, carnivores in southwestern China, and black bears in Maine. In addition to being a professor at Unity College, he is also an Associate Editor at the Journal of Mammalogy and a Fulbright Scholar.

Dear project backers (who gave $100+),I am writing to provide you an update about the hat. We had a prototype made, but as you can see below, the logo pulls at the fabric. I really don't like it, s...

Thanks for your support!

Thanks to everyone that supported our project!!! Please be sure to send me your address if you have a hat coming your way :-)

This last week Dr. Hopkins attended the annual conference for the International Association for Bear Research and Management in Ljubljana, Slovenia. While at the conference, he met with local colla...

More cool video of wildlife captured on camera at our black bear hair traps in Maine! Be sure you and your kids make it to the end -- there's a surprise! Can you name all the species?

More cool video of wildlife captured on camera at our black bear hair traps in Maine! Be sure you and your kids make it to the end -- there's a surprise! Can you name all the species?

Coyote at a hair trap

Check out more great video of wildlife from our archive...

We are happy to report that we have finished our first field season. We have collected over 150 hair samples from hair traps and hundreds of video clips of bears, moose, deer, coyotes, fishers, bob...

209
1
3
Thanks, Lynn!
A noninvasive approach to monitor the health of Maine's black bear population
View comment