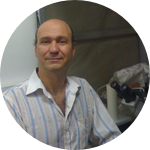 I started as an MD-PhD candidate at SUNY Downstate in 1981, graduated with an MD in 1989, did an internship from 1989-1990 and completed my PhD in 1991. My thesis work was on modulation of the GABA receptor. I remain fascinated by the process by which small compounds like drugs affect larger entities like ion channels. How does something the size of a marble affect something the size of a basketball? It has become clear to me that the only way to understand this process is on a thermodynamic level.

I completed a residency in emergency medicine in 1997 and returned to Downstate to take a voluntary position as a Research Assistant Professor. Since then I have been practicing Emergency medicine on a part-time basis allowing me to devote more time to research. I was awarded an RO3 from NIH in 2000 to study modulator interaction at the GABA receptor. The first thing I set out to do was test the conventional method of data analysis (still widely used). I found it to be hopelessly flawed. None of the experts in the ion channel field could explain the problem until I met Dr. Alan Hawkes who knew exactly what was wrong and gave me the formula that forms the basis of CVF. Since then my only goal has been to validate the method and apply it to as many ion channels as possible.

By 2006 I had published the paper describing the CVF method, but was unable to get funding despite 7 NIH applications, 3 NSF applications and various appeals to private sources. Nearly bankrupt, I began a collaboration with a lab in Shanghai which is still ongoing. They are interested in acid sensing ion channels and a post-doc collected the data sets described above. Unfortunately ASIC1a is much more complicated than expected. The paper I am preparing describes a model with 32 distinct states. Throughout this process I have remained committed to doing this and doing it right.

How Do Ion Channels Really Work, Fundamentals of Biological Electrical Activity, the Bits of the Brain?

Helping parents and their teens talk about romantic and sexual relationships

271
-2
3
The result section is not working so I will use this space to share some of the results I have so far. All 4 channels I have applied this method to thus far had one surprising feature. All four appear to function in what I am calling a pseudo-cyclic manner. Each one opens in response to the binding of an agonist and deactivates as the agonist dissociates. It appears that this is not a linear process. The deactivation has the potential to use a different mechanism than activation. The favored models thus far all have two distinct arms connecting the resting state to the open states. One arm primarily for activation and one primarily for deactivation. One of the questions going forward will be if this is a universal aspect of all biological channels.
How Do Ion Channels Really Work, Fundamentals of Biological Electrical Activity, the Bits of the Brain?
View comment