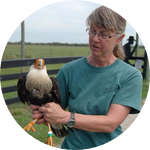 I have been passionate about birds since I was 6 years old. Always up for a challenge, I began working on caracaras in Florida, which had never been studied anywhere, for my PhD research at the University of Florida in the 1990s. Caracaras there are listed as threatened because of habitat loss and a concomitant population decline. Raptors have intrigued me since the 1980s, when I began working as a field assistant for my mentor, who then was studying a species of hawk in New Mexico. So when I got to Florida, I thought I knew about raptors and could easily study the caracaras. Boy was I wrong! Caracaras are very smart, living as both predators and scavengers. I quickly discovered that many of the capture and study methods used on other raptors don't work on caracaras. Capturing them was a challenge! But my team and I developed a successful method, and so I have continued to study these birds for over 20 years. Even after I earned my PhD and began working as a professor at Trinity College in Connecticut, I continued my research in Florida, sponsoring a PhD student and a post-doctoral student who explored other aspects of the research. Together we have published scientific papers on the caracara's breeding biology, food habits, movements, survival, and habitat associations and we have presented at many national conferences including the annual meeting of the Raptor Research Foundation. One unexpected finding was that Florida's caracaras seem to prefer nesting and foraging in human-managed landscapes such as agricultural lands and cattle ranches, rather than in native prairie grasslands. This situation makes for a positive working partnership among ranchers, scientists, and wildlife managers, who focus on reducing threats to Florida's caracara population. We work together to understand land management actions that favor caracaras and their habitats. A video describing my research in Florida can be found here.

Where do all the caracaras that winter in central Arizona go during summer?

Updates for the New Year   As we begin the 2nd year of this project, we reflect on what we’ve learned and how we will proceed.  Turns out the older caracaras are quite difficult to capture, so we expect more success by focusing on nestling...

Updates for the New Year As we begin the 2nd year of this project, we reflect on what we’ve learned and how we will proceed.  Turns out the older caracaras are quite difficult to capture, so we exp...

Just about ready to fledge!

Updates!We continue to monitor our tagged juvenile caracara. It has been more than 2 months since we tagged him and he seems to be doing fine. Most locations received are in agricultural fields, ...

Our first success!We tagged our first caracara on the Santa Cruz flats, a juvenile, on November 17, 2017. Since his release, he has moved alot around central Arizona, north of Tucson. Telemetry l...

Updates from the caracara project

Hello everyone.  I figure I should give you some updates on our caracara project in Arizona. We tried 2 trapping attempts over the past few months, with no success.  This was not un...

Groups of caracaras are foraging in the fields in central Arizona and we have received the GPS transmitters, so it is time to begin field work.   We will make the first attempts at trapping over th...

Where is the food?

Our campaign was successful!  Thanks to all our backers for your support!  With the technology on order and our field observers already collecting data on the ground, we will be rea...

Here are some counts, done over the past couple of years, of caracaras (CRCA) and black vultures (BLVU) in our Arizona study area. The seasonality in presence of car...