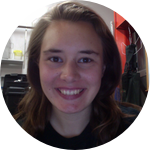 About
When I was a kid, I wanted to be a paleontologist and dig up dinosaurs. As I got older, I realized that although that is an awesome job, I really wanted to do something that looked toward the future. In light of global change and the destruction of ecosystems due to human interference, I wanted to work on applied environmental science to try to reverse some of the damage.
I started off by attending the Semester in Environmental Science at the Marine Biological Lab in Woods Hole, MA, during my junior year of undergraduate studies. It was there that I started my work on the barriers. Back then, I studied the geochemistry of the barriers (how much nitrate they removed and what other substances were being created inside it), and whether they affected the abundance of animals that lived nearby. I continued this research for my senior honors thesis during the next summer and during my senior year at Connecticut.
My advisor at Connecticut College got me interested in the microbial side of things, since they are the ones that power biogeochemistry (the cycling of elements by living things) in the barriers. Bacteria are the ones that actually do the nitrate removal, after all. I worked with her on her research that looked into ammonia-oxidizing archaea living in Sippiwissett Marsh, not far from Woods Hole. These microbes had recently been discovered to play a role in nitrogen cycling in salt marshes.
Following this path naturally led me to come work in Dr. Jennifer Bowen's laboratory at UMass. She specializes in bacteria and the nitrogen cycle. In my first year of graduate study, I became interested in not only the bacteria in the barrier involved in nitrogen cycling, but also those involved in other processes as well. My interest in methylmercury in groundwater and how bacteria can affect how much is produced was born.
In addition to bacteria, I also enjoy ice hockey, sailing, and British television : )
Joined

Are woodchip barriers adding to mercury pollution in our estuaries?

The Boston Globe has just written up an article on this project and the benefits of crowd funding in general. Read more here.

I'm writing this note to let you all know a little bit more about my experimental design. I'm trying to raise money to build six mesocosms. Three will be miniatures of the woodchip barrier, and ...