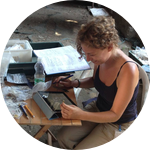 How did Rome create new cities to build an Empire?

Blog Posts and Press Clippings for Those Sheltering in Place

Hey everyone! Got some extra time sheltering in place? Check out our blog and read about our past seasons of geophysical survey at Libarna!https://libarnaarchproject.org/blog/And check out our pres...