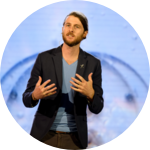 Matt is the Founder and CEO of KOLOSSAL. Matt is a fellow of the Explorers Club, a marine scientist, technology enthusiast, and conservationist. For over 12+ years he has worked in ocean exploration and conservation as a staff researcher at Scripps Institution of Oceanography, a marine scientist at ocean conservation group Oceana, Director of the Ocean Initiative at the XPRIZE Foundation, and was the CEO of EnVest. Alongside KOLOSSAL he works with ocean and climate investing funds. At the helm of Kolossal they became one of 20 candidate groups for the 2018 Pritzker Emerging Environmental Genius Prize - Kolossal was the Grand Prize winner for the Con X Tech Prize for prototyping a deep sea camera system.

He has a Masters in Marine Biodiversity and Conservation from Scripps Institution of Oceanography, UCSD and a Bachelors in Environmental Studies from Miami University.

SubC Imaging has been hard at work for months to develop and test the technology that was just successfully loaded on to the vessel. The loading and measurement tests are an essential milestone tha...

YOU Fully Funded our Researchers Travel and Insurance in Less Than 24 Hrs! A Colossal Thanks, and a New Stretch Goal for Some Squid Attracting Lights

It's official - because of you, yes you, we are able to book flights and insure the equipment and scientists in order to go to Antarctica and search for the colossal squid!!! It's all finally comin...

The SubC Imaging team has been hard at work in Canada doing wet tests with the deep sea camera system using a tank that can simulate the currents and/or drag speed we may encounter as the vessel us...