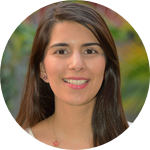 Raquel obtained her BSc in Geology from the University of Costa Rica (UCR) in 2010. She received a Diploma of Academic Excellence, Best Grade Point Average of Geology, 2011. In 2013, she graduated with an advanced degree (Licenciatura) in Geology from the UCR, having her thesis approved with distinction. In 2014, she started her doctoral studies at Texas A&M University, as part of the High Alpine and Arctic Research Program (HAARP) working with Dr. Rick Giardino. In 2016, Raquel was awarded with the International Peace Scholarship from the P.E.O sisterhood. Raquel joined the Geology and Geosciences Virtual Internship Program in April 2015, and has been working with Michael Lilly from Geo-Watershed Scientific through Texas A&M University. As a result of this collaboration, she was part of the Conference Technical Program Committee for the American Water Resources Association (AWRA) 2016 Spring Specialty Conference on Water-Energy-Environment Nexus. Raquel collaborated with Dr. Giardino and Dr. Chris Houser as a co-author in two of chapters of the book: "Principles and Dynamics of the Critical Zone", published in 2015.

When will the Southern European glaciers disappear?

Testing our new G-TEM system - Special thank you to Dr. Mark Everett for making this possible!

On January 25th, Dr. Mark Everett, three fellow graduate students and Raquel visited the Texas A&amp;M Riverside Campus to test the new G-TEM System. This is the first of a series of test runs that...

I was pulled towards science for longer than I can remember. I still get to hear stories from my family about little Raquel spending hours "conducting experiments" since I was 2 years old. Such exp...

How we got here

If you read our team bio you know that we have worked together in projects related to water resources since 2014. Our previous teamwork turned out to be very success...