Well! This has been a long time coming, but my results are finally published. Thanks to all of your generous donations, I was able to run all of the serological assays on two years worth of coyote samples, plus some genetics!

I found genetic and antibody evidence of spotted fever group Rickettsia bacteria in coyote tissues, but we were unable to conclusively call it R. rickettsii (the species that causes Rocky Mountain Spotted Fever). That said, several pathogenic Rickettsia species occur in and around Arizona, and they are quite difficult to tell apart diagnostically. The silver lining is that they present with similar symptoms and, if caught early, can be cured with a course of Doxycycline, usually without chronic organ damage. The important thing is to get immediate medical attention in the case of flu-like symptoms accompanied by a rash, regardless of whether you remember being bitten by a tick.

Here is the link to the online-first version of the article. Currently it's behind a paywall, but you are collectively acknowledged at the end. I'll try to upload a PDF at a later date.

Thanks again for your support!

Rocky Mountain spotted fever (RMSF) is a tick-borne bacterial infection that can cause permanent disability or death in humans, with a case fatality rate up to 28% untreated. In 2003, RMSF moved into Arizona, where it is vectored by the brown dog tick (Rhipicephalus sanguineus).

We would like to determine whether coyotes develop antibodies for RMSF - indicating that they are affected by the disease - and investigate whether they facilitate the dispersal of RMSF-infected ticks.

RMSF in Arizona typically arises only on tribal lands, which commonly have large numbers of free-roaming dogs that are not treated for ticks. The Arizona tribes have been working diligently over the past several years to treat dogs and homes for ticks and to educate their residents on responsible pet ownership. These efforts have been largely successful, but not 100% effective.

Animal control and health officials on one reservation in particular noticed that human cases of RMSF continued even when all dogs were treated with tick collars and no dogs showed symptoms or antibodies for the RMSF bacterium. This led the officials to believe that coyotes or other mammals may be responsible for dispersal of RMSF-infected ticks.

Knowing whether coyotes are parasitized by brown dog ticks will lead to coyote management initiatives to prevent their presence near human habitations. This is especially important on tribal lands, where anecdotal evidence suggests that coyotes are more likely to come near houses. This will improve the overall effectiveness of RMSF prevention campaigns.

This research will test whether brown dog ticks parasitize coyotes and whether coyotes facilitate the long-distance dispersal of the disease vector. We will collect ticks, blood, and a biopsy of ear tissue from coyotes that have been culled by game management agents to protect fawning pronghorn (Antilocapra americana).

The ticks will be identified to species. We will look for RMSF antibodies in the blood, and bacterial DNA in the skin and ticks (phase 2 of the project, which will be funded separately).

We currently have a few more than 100 blood samples. The budget items listed here will allow us to collect 100+ more samples, optimize the serology tests, and determine presence or absence of antibodies on all 200. The fuel cost is necessary to enable us to travel to various locations throughout the state of Arizona. This is directly related to the collection of additional blood samples.

We have the opportunity to collect additional samples through a partnership with a state governmental agency. However, we don't currently have any external funding to begin diagnosing the samples we have or to pay for the necessary supplies listed above, so your contribution will enable us to move forward with our research.

I have worked extensively with this research team and have compete faith in their abilities to conduct this very interesting and timely research. Eric presented the topic and problem exceeding well and and I thoroughly endorse this project.

Lynn W. Robbins, Ph.D
Emeritus Professor
Missouri State University
This project is timely and well-contrived; it proactively addresses a growing and serious public health concern. Eric is well-qualified to conduct this experiment because of his expertise, experience, and interest in wildlife conservation and behavioral ecology. I endorse this project wholeheartedly and am eager to see it succeed!

Russell Benford
Assistant Research Professor
Northern Arizona University
This is a crucial project that addresses a void in knowledge in disease ecology in at-risk communities where monitoring is limited. The experimental design is well suited to answer the proposed questions and Eric is well-qualified to execute this project. I strongly endorse this project. 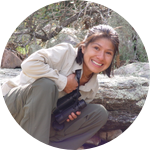 Nashelly Meneses
Research Associate
Northern Arizona University
This project will provide information on key elements in the natural history of a zoonotic pathogen. I have confidence that Eric and colleagues will be able to execute their analysis and I endorse their efforts.

Sean Maher
Assistant Professor
Missouri State University
This project is well thought out and will yield important data to help us understand the vectors responsible for the spread of this and other zoonotic diseases. Their results will have broad implications around the country as coyotes are increasing with the demise of higher predators and habitat modification suitable to this generalist species. I have known Eric and Dana since they took general biology from me, and have followed these hard working and thoughtful researchers since- I have no hesitation endorsing this important study. 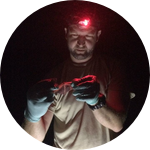 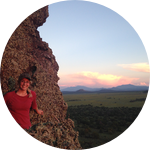 Eric and Dana Green are wildlife biologists and graduate students at Northern Arizona University. They each have separate research projects, but they have complimentary skills and work well as each other's field technicians. They met as undergraduates at Missouri State University, where they worked on several projects together, culminating in two publications in preparation. "The Greens" got married in June 2014 and still enjoy doing science together.

Eric Green is a field naturalist and wildlife ecologist. He has a Master of Science in Biology from Northern Arizona University, a Bachelor of Science in Wildlife Biology from Missouri State University, and an Associate of Applied Science in Electronic Systems Technology from the Community College of the Air Force. In the Air Force, Eric was an electronics technician for 10 years. At Missouri State University, Eric gained a wealth of experience in field and lab techniques, working with bats, armadillos, turtles, and salamanders. His master's research found serological and genetic evidence of rickettsial pathogens in coyote tissues. Contact Eric directly at EG.Biology@gmail.com.

Dana Green has always had a passion for animals, but wanted to go a different direction other than veterinary medicine. After working closely with a big cat sanctuary as the Intern Director, she decided to focus on active research while earning her bachelors degree in Wildlife Biology. While earning her B.S., she actively researched behavioral ecology of salamanders, armadillos, and endangered bats. Dana is now working toward her Master of Science in Biology degree in Flagstaff, AZ. There she is focusing on predator-prey dynamics with a focus on how the prey base affects top predators. Her interests include: habitat ecology, habitat selection, predator-prey relationships, and behavioral ecology. She is currently working in collaboration with her husband, Eric Green, on various projects. Together they have two publications in preparation. Hobbies include: reading fantasy, hiking and backpacking, and painting.

The Centers for Disease Control and Prevention (CDC) have lots of information about RMSF.