The economy of the Lower Yakima Valley (Yakima County, WA) is supported by animal and plant agriculture, providing the greatest sources of employment and commerce to the region. Agriculture depends on a labor pool of workers, many of whom represent disadvantaged and vulnerable populations. Our project will evaluate the waters of the Yakima River, plus associated canals in adjacent farm lands, to reveal the exposure of affected people to toxic chemicals in these waters. We developed a Passive Sampling Device (PSD) method to capture specific toxic chemicals expected to be present in the subject waters and in adjacent irrigation and waste flow canals, and in surrounding soils. Historical analyses evaluated other toxics in these waters, but not the analytes included in this investigation.

This project will reveal toxic chemicals captured by our PSD system in the Yakima River and associated waters. Citizens of Yakima County and visitors fish and swim in the Yakima River, without restriction, yet sampling by County, State and Federal agencies has not revealed some of the most toxic chemicals. We will detect additional persistent and bioaccumulative toxics. Our PSDs target Brominated Flame Retardants, Organochlorine Pesticides, such as dieldrin, aldrin, chlordane and hexachlorocyclohexanes, and Polychlorinated Biphenyls (PCBs). This work is expected to define more fully the risk and threat to people exposed to these chemicals by their work in the agricultural industry, and by their proximity to, and recreational activities in, these waters.

PSDs were placed in the Yakima River and adjacent canals in April 2016. The PSDs were recovered after 30 days and stored frozen. The PSDs will be shipped to our cooperating analytical chemistry laboratory for extraction and analysis. The goals are to: i) Discover if people who use the waters of the Yakima River and adjacent waters are exposed to Brominated Flame Retardants, Organochlorine Pesticides and PCBs; and, ii) Provide reports of our findings to agencies and the public for their information and use. While many analyses have been performed on these waters historically, most of the analytes that are the subject of this investigation have not been evaluated previously. These analytes are dangerous toxic chemicals reported to cause cancer and other chronic diseases.

The development and implementation of this project was supported by personal and other resources. The Passive Sampling Devices (PSDs) were constructed, deployed and recovered in early 2016, and now await extraction and chemical analysis for the target analytes. The purpose of this stage of the project is to support the costs for packaging, shipping, extraction and chemical analysis of the PSDs for the target analytes, including Brominated Flame Retardants, Organochlorine Pesticides and PCBs that are expected to be in the test waters. These toxic chemicals are likely to have been introduced into the subject waters in fertilizers, pesticides, CAFO manures and Toxic Sewage Sludges, all of which are used in the Lower Yakima Valley on agricultural crops, including on food animal feed crops. This proposed funding for the project will support the analytical chemistry work that is core to this investigation.

I excitedly endorse this project, as it seeks to address a poorly studied dimension of the age-old issue of disproportionate exposure of disadvantaged populations to chemical contaminants. Where regional agencies have tended to look only for the usual suspects, this project seeks to characterize a suite of persistent, bioaccumulative and toxic compounds not typically considered problematic in AG-impacted natural systems. The study also addresses potential impacts of synergistic contaminant interactions and is thus novel and timely. 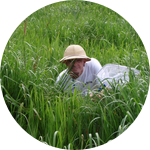 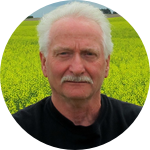 The Researcher’s doctoral research explored mechanisms of sexual reproduction in the Oomycetous plant pathogen Phytophthora parasitica. The objective was to discover biological controls for this and other Oomycetous plant pathogens and diseases, rather than increasing the use of chemical agents. Note: Oomycetes, or water molds, are more closely related to algae and green plants than to fungi.

He was Field Research Microbiologist and Environmental Monitor in Antarctica for the US Antarctic Research Program, as sponsored by NASA/JPL and the National Science Foundation.

He was consultant to the US Department of Energy as field environmental monitor for energy exploration projects on Tribal lands in the Western US.

For ten years he was Executive Director of a national program of pediatric cancer clinical trials research at the University of Southern California, Comprehensive Cancer Center.

His specialty is the discovery and development of novel antimicrobial agents from sewage sludge and other harsh and toxic environments for use in the treatment of infections incited by antibiotic-resistant forms of Staphylococcus aureus and Mycobacterium tuberculosis.

He is dedicated to the prevention of chronic diseases by evaluating toxic chemicals in land-disposed sewage sludge in forests and on agricultural and rangelands, thereby eliminating land disposal and human exposure. Many forests and farms where toxic wastes are disposed are behind locked gates, so Richard gains access by mountain bike - research is not always done in the lab.

This Passive Sampling Device (PSD) method was employed by us previously in the Snoqualmie River along the western slope of the Cascade Mountains (Eastern King County, WA). Targeted toxic chemicals were detected in the waters of the Snoqualmie River and subjected to analytical chemistry evaluation, with success. Snoqualmie Forests and Lower Yakima Valley (LYV) agricultural lands are subjected to disposal of the same Toxic Sewage Sludges from King County’s wastewater treatment plants (WWTPs). Toxic Sewage Sludges from local Yakima Valley WWTPs, plus agricultural fertilizers, pesticides and CAFO (Concentrated Animal Feeding Operation) wastes, also impact these same waters. Agricultural workers and their families are exposed to toxic chemicals in sludges and agricultural chemicals through their work and lifestyle. This PSD sampling and analytical chemistry investigation seeks to determine if certain toxic chemicals commonly encountered in Toxic Sewage Sludges and in agricultural products and wastes are released and available in the working and living environments of disadvantaged and vulnerable farm workers of the LYV, resulting thereby in their chronic exposure to the targeted toxic chemicals.

Disadvantaged and Vulnerable Populations include people challenged by physical or mental disability, but often they are without economic support, citizenship status, education, employment skills, political power or other means of influence. Included are economically-disadvantaged racial and ethnic minorities, plus people who are uninsured, low-income children, elderly, homeless, and those with chronic health conditions, often from exposure to environmental contaminants and pollutants.

Brominated Flame Retardants (BFRs) are organobromine compounds that have an inhibitory effect on combustion chemistry and tend to reduce the flammability of products containing them. Of all the commercial chemical flame retardants, the brominated varieties are used widely. They are used in plastic products and textile applications, such as electronics, clothes and furniture. Polybrominated Diphenyl Ether flame retardants (PBDEs) are produced synthetically, with widely varying chemical properties. About 400,000 tons of BFRs were sold in 2011. The electronics industry accounts for the greatest consumption of BFRs. BFRs are used in many products, including plastics in television sets, carpets, pillows, paints, upholstery, and domestic kitchen appliances.

Polychlorinated Biphenyls (PCBs) are organic chlorine compounds. PCBs were once widely deployed as dielectric and coolant fluids in electrical apparatus, carbonless copy paper and in heat transfer fluids. PCBs do not readily break down once in the environment. They can remain for long periods cycling between air, water and soil. PCBs can be carried long distances and have been found in snow and sea water in areas far from where they were released into the environment. As a consequence, they are found all over the world. In general, the lighter the form of PCB, the further it can be transported from the source of contamination. PCBs can accumulate in the leaves and above-ground parts of plants and food crops. They are also taken up into the bodies of small organisms and fish. As a result, people who ingest fish may be exposed to PCBs that have bioaccumulated in the fish they are ingesting.