Many research and conservation efforts are dedicated to managing species like salmon, and these often try to mitigate the impact of humans. But what about other predators? We are taking a look at one potential candidate: the salmon shark. Using sightings reports, tissue samples, and tagging, we will learn what they eat, how often, and where. Our goal is to determine how much these sharks affect salmon numbers in the Pacific Northwest.

No matter where you live, it’s likely that you have heard of, seen, or even tasted salmon. They are important fish in many ways – economically, culturally, and ecologically. As a result, much research focuses on making sure we can fish them sustainably. However, natural ecosystems are complicated and hard to predict. For some salmon populations, conservation strategies work well, while other populations don’t respond as expected. This may be because while we can control our own actions (by limiting our fishing, for example), there are other factors affecting salmon populations that we need to consider. Key among these is predation. Our goal is to examine a potential salmon predator: the salmon shark.

For decades there have been reports of salmon sharks feeding on salmon and other commercially valuable prey throughout the Pacific Northwest (PNW). Salmon sharks may be a particularly impactful predator because they have an unusually high metabolism, and therefore need to consume large amounts of prey. In Alaska, these sharks may take 12-25% of the annual run of Pacific salmon. But, there is little information on salmon sharks in the PNW. We still don't know how many there are, how often they feed on salmon versus other prey, and what drives their movement patterns. All of this is necessary data to determine the ecological impact of salmon sharks, but is missing from salmon management plans. This information could lead to more accurate fishing regulations, such as quotas.

Starting in March 2022, we aim to determine the feeding behavior and ecosystem impact of salmon sharks in the Pacific Northwest. To do so, we have two different objectives. First, we will use stomach dissections and other samples (muscle, liver, and blood) to determine what salmon sharks are eating, and how much. We are relying on fishermen and fishery observers to help us collect these from deceased individuals that have washed ashore or are captured onboard. We will also use cameras attached to the dorsal fin of live sharks to capture predation events on film. Second, we will use tagging data, in addition to existing datasets, to model how frequently salmon shark movement and habitat overlap with those of salmon.

For this project, we have earned the support of a small amount of NOAA funding. We will also be taking advantage of existing resources and datasets available via the Tagging of Pacific Predators Project (Stanford University) and the Big Fish Lab (Oregon State University). However, we still lack the necessary funds to tag our own animals and contribute to these datasets; for example, no salmon sharks have been tagged in Oregon to date. Additionally, because we are based in Oregon, we need travel funding to collect samples outside of driving distance (specifically, Alaska).

Amazingly, we know very little about Salmon sharks, one of the most important predators in the North Pacific. Dr McInturf is undertaking a critical and compelling project to understand their role in marine ecosystems and fisheries. 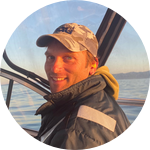 We have begun the process of collecting and analyzing stomach samples. We plan to complete the first round of stomach dissections by April, 2022. We will conduct fieldwork to collect more samples and tag individual sharks in the summer of 2022 and 2023. Models and analysis of fieldwork samples will be completed by December, 2023, with the project complete by January, 2024. Results will be shared via this page at each milestone, and regularly on social media (@big_fish_lab).

Analysis: first round of stomach content and tissue analysis; modeling of salmon shark distribution from tags deployed in year 1 and previously (from collaborators) 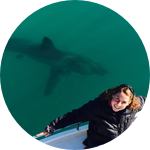 My research generally focuses on how marine organisms respond to biotic (living) and abiotic (non-living) environmental variables. I use this information to contextualize and predict behavior, movement patterns, and survival. I explore this topic in threatened marine fishes. For my PhD, I studied salmon and sevengill sharks in California and basking sharks in Ireland. I am currently examining the foraging ecology of salmon sharks in Oregon and Alaska and its relative impact on local salmon populations.

Finally, I am an avid science communicator and have developed and led graduate-level courses on this topic. In addition to sharing my SciComm endeavors, I co-coordinate the Irish Basking Shark Group. 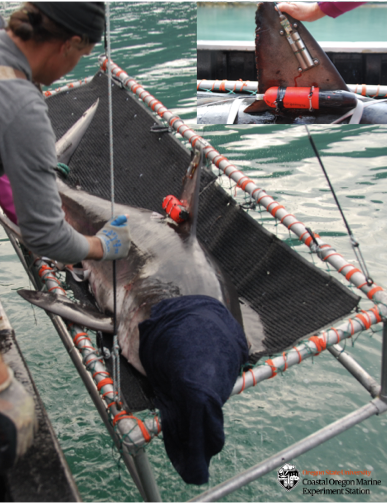 We can tag salmon sharks with biologging devices and cameras, as shown above. These tools will record information on the swimming and feeding behavior of these animals, from days to weeks and months. Please note that the capture, tag, and release procedure was approved by the OSU institutional committee and was conducted with proper permitting. 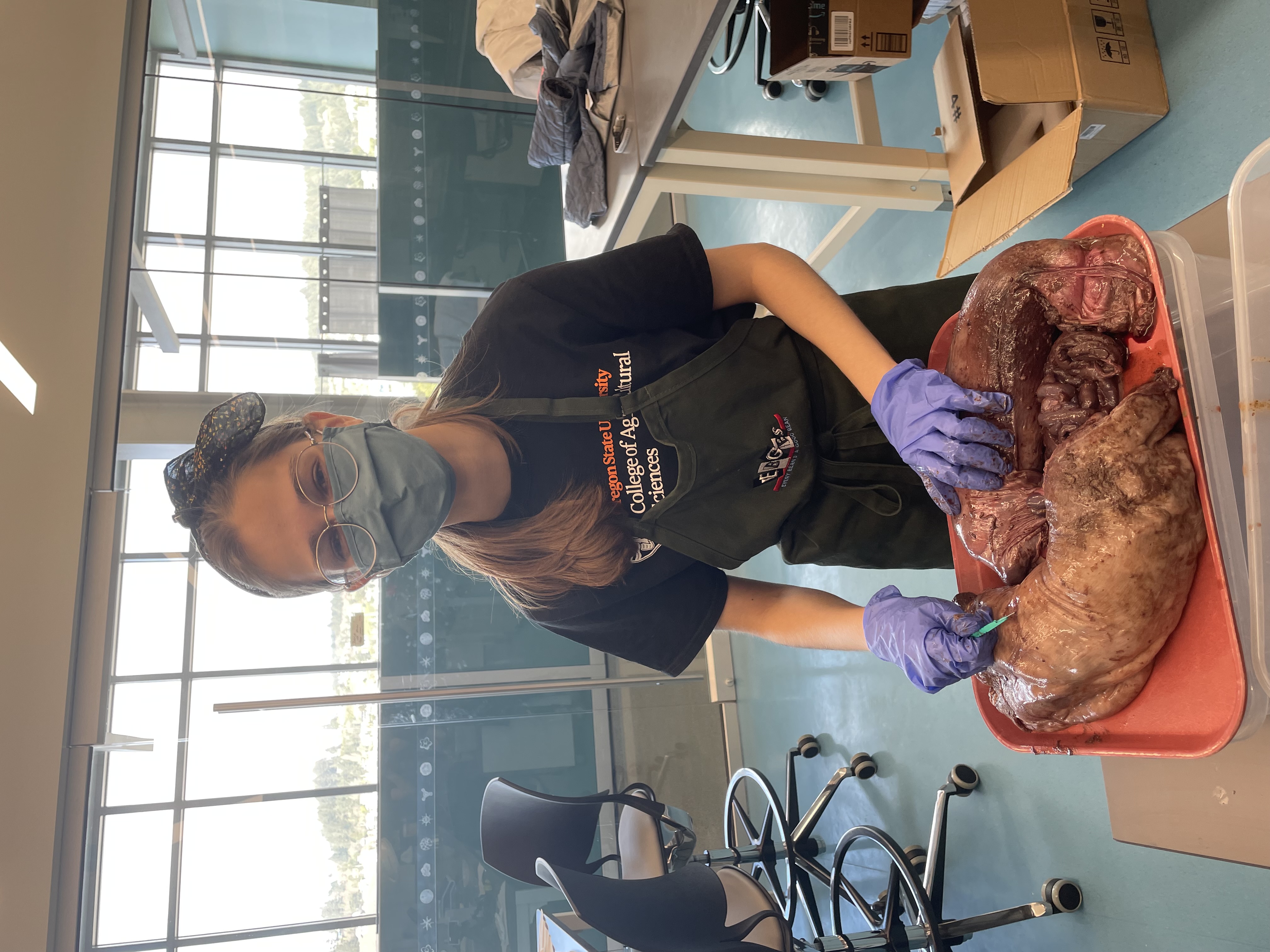 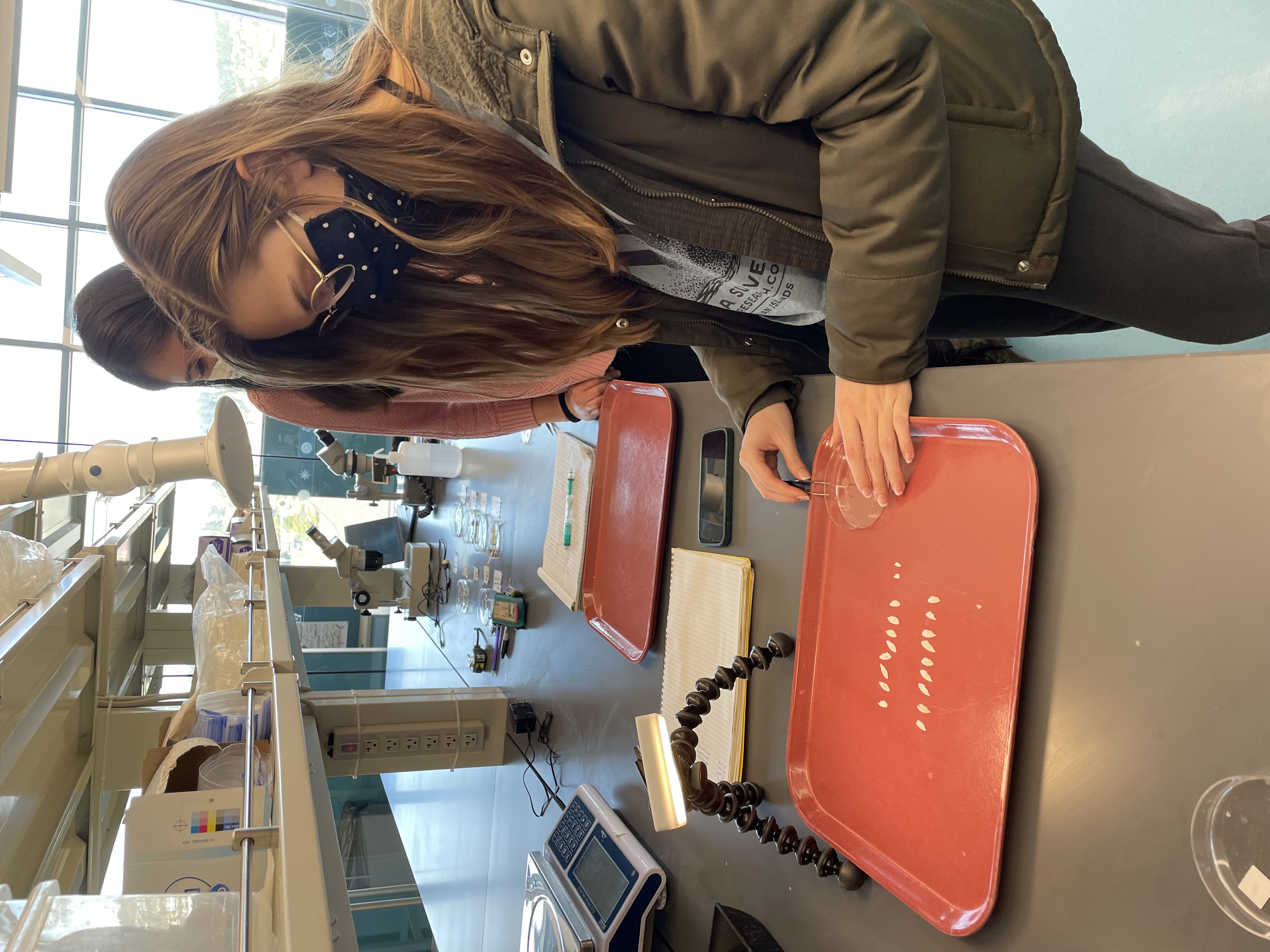 Preliminary stomach contents have revealed otoliths, or fish ear bones. Because otoliths have a shape unique to each species, we can use these bones to count how many and what type of fishes salmon sharks might be eating. Here you can see our research intern Charlotte beginning a dissection and then counting the otoliths. 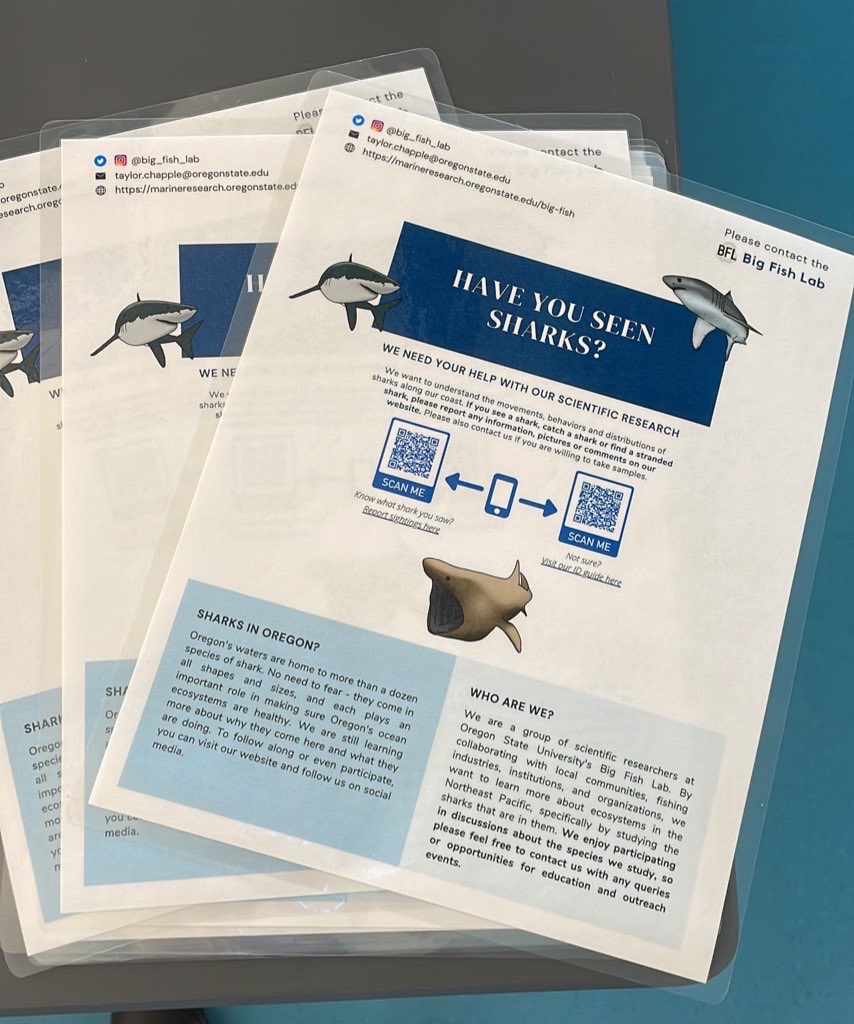 We are relying on community involvement in this project, and will use flyers such as these to ask fishermen to report their salmon shark sightings and contribute samples if they are willing.