Sucralose, trade name Splenda®, is a widely used artificial sweetener derived from the natural sugar sucrose. Recent research has shown that consuming sucralose can lead to glucose intolerance and a reduction in beneficial gut bacteria in mice. Glucose intolerance has been linked to obesity and diabetes. This study examines whether chemical modifications cause the sweetener to interact with biomolecules differently, and in a way that may make consumption harmful to humans.

Sucralose is an artificial sweetener, derived through the chlorination of sugar, which is approved for use in over 80 countries. The use of artificial sweeteners is not positively correlated to weight loss, and may be linked to changes in insulin levels. In animal models sucralose has led to changes in glucose tolerance and alterations of beneficial gut bacteria. Given the synthetic nature of this molecule, it is not readily metabolized, and therefore it is unclear how the molecule interacts with the body or in the natural environment. These and other findings led the Center for Science in the Public Interest (CSPI) to downgrade the safety rating for sucralose in 2015. Our own results indicate that sucralose interacts strongly with biomolecules, and therefore merits further study.

It has been assumed that due to its limited bioavailability that sucralose is safe, however data is accumulating that sucralose interacts strongly with living systems and therefore deserves closer examination of its chemical and physical properties. Our work will provide data on sucralose's impact on cellular membrane structure and its electrostatic interactions with proteins. We will also assess the impact of sucralose on bacterial growths that are reflective of the human microbiota. This data will enable us to relate the maladies associated with sucralose consumption to a direct interaction in living systems. Our goal is to understand how sucralose interacts with biomolecules so we can isolate its effect on the digestive system and understand its interactions in the natural environment.

It has been demonstrated that sucralose alters protein stability and interacts strongly with bacterial membranes, we will further characterize sucralose-biomolecule interactions. In particular we will i) utilize a series of compounds (both sugars and other molecules) to complete an electrostatic analysis to quantify the origin of the protein destabilization; ii) complete our analysis of the impact of sucralose on bio-membrane structural organization ; iii) expand these studies to assess the same physical measurements on bacterial extracts; and iv) assess the impact of sucralose on bacterial growths that are reflective of the human microbiota. The proposed work will greatly expand knowledge of the nature of the chemical and physical interactions of sucralose with living systems.

Direct measurement of the interaction of sucralose with biomolecules and lipid membranes will require both chemical and physical analysis. We are incorporating an interdisciplinary approach to analyze changes in both model systems and living bacterial cultures. The materials outlined will enable us to implement these experiments. The apparatus required are all currently available in our laboratories, and thus primarily disposable materials are required.

The work began as an offshoot to our investigations on the influence of small molecular additives on dynamic self-assembly in biological systems. We recognized an opportunity to explore a molecule which appears to alter biological function strongly and thereby learn more about biocompatibility. The work is not supported by external funding. 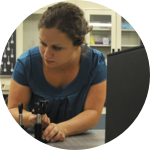 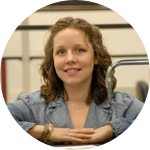 Erika A. Taylor
Assistant Professor of Chemistry and Environmental Studies 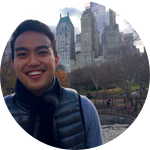 Prof. Christina Othon, Ph.D. has 15 years experience in experimental soft condensed matter and biophysics. She is an expert in advanced time-resolved spectroscopy techniques and biological collective dynamics. Her work focuses on the role of solvent dynamics in protein stability and the use of dynamic modifiers such as osmolytes in natural systems.

Prof. Taylor is a PhD chemist and biochemist with 19 years experience in small molecule synthesis and characterizing protein function. As a faculty member at Wesleyan, her projects have focused on the identification and characterization of enzymes that are important for the development of antimicrobials for the treatment of Gram-Negative bacterial infections (with an emphasis on bacteria that cause food-bourne illnesses including E. coli, Salmonella, and V. cholerae). Her recent work includes characterization of the biosynthesis of bacterial cell surface lipopolysaccharides, and utilization of biophysical and kinetic methods to investigate the role of protein dynamics in catalysis and inhibition of enzymes.

Zhi Ming Gan is a sophomore at Wesleyan and a beginning researcher majoring in science and economics. He will conduct the model membrane structural measurements.

Eduardo Vega-Lozada is a second year physics graduate student who is responsible for the lipid dynamic measurements.

Nimesh Shukla is a fourth year graduate student in physics. He will be responsible for the ultrafast optical spectroscopy used to measure the electrostatic interactions.

Hanna is a junior at Wesleyan University majoring in chemistry. She joined Dr. Erika Taylor's lab in her sophomore year of college and plans to move on to a Ph.D. program after graduation.