As the SES Elodie Sandford Explorer I am working with the Ugandan Wildlife Authority and Wildlife Conservation Society to develop the most recent estimates of population density for African lions, leopards and spotted hyena in the Queen Elizabeth National Park (1978 km2), southwestern Uganda. I will also work with a team to assess the conflict of these species with livestock farmers in strategic locations on the park’s edge and in villages located within the park.

Africa's large carnivores are in decline across much of the continent.

Our team will update information on the population density of African lions, leopards and spotted hyenas and examine key locations of human-carnivore conflict in and on the borders of the park. We will train two Ugandan university students and run two workshops for the Ugandan Wildlife Authority and WCS on counting large carnivores for surveys in 2019 onwards.

There is a general lack of data on the population status of African lions across the continent and the confidence (precision) of current estimates across the majority of locations in Africa are very wide. We will trial a new spatial method to better estimate lion numbers using whisker spots and capture recapture models.

Our team will also perform the first population estimates of African leopards in Uganda.

Our project has five overarching goals:

We have raised the majority of the funds needed for this project but this final US$ 5000 will help us secure the necessary equipment and field resources to complete our camera-trapping and train local Ugandan scientists. This small funding project will also allow you to help African lions and local scientists directly!

This project is essential for us to understand what's happening with large carnivore numbers in Uganda. Estimating predator numbers is a tricky business, so this method should come up with a more accurate number so that we can determine what the true baseline is for some of these species, as well as work out trends in population numbers for others. It'll also be very useful to know where the conflict hotspots are so that we can focus interventions here. I know of no other big cat biologist who has more dedication & tenacity than Alex! 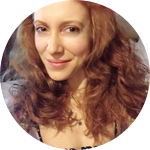 Write up of project results: August 2018 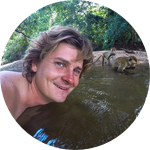 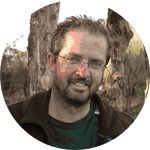 We are a diverse and multi skilled team comprised of African and international scientists. We are working collectively with the Ugandan Wildlife Authority and Wildlife Conservation Society to perform the first ever leopard density survey and update recent numbers of African lions and spotted hyenas. We are also assessing conflict hotspots of these species with local farmers in Queen Elizabeth National Park and on its borders.

My name is Alex Braczkowski and I'm a big cat biologist and cameraman from Durban South Africa. I'm headed to Uganda to link up with the Wildlife Conservation Society and Ugandan Wildlife Authority to do the first ever leopard census in the country (Queen Elizabeth National Park) and update African lion and spotted hyena numbers there. I'm also working with the WCS and UWA to examine areas of human-carnivore conflict (mainly over livestock) in the park and on its boundary.

I have been working in the Albertine Rift region, Africa's most biodiverse region for vertebrates, since 1988 and have been involved with conservation of eastern gorillas, chimpanzees, elephants and large cats. Work we have done to conserve Uganda's lion populations include monitoring the famous tree-climbing lions of Ishasha, undertaking the first call-up survey of lions and hyaenas in Uganda, supporting pastoralists with projects to supply water and improve rangeland so that conflicts with lions are reduced and monitoring livestock kills and what it will take to compensate local people for livestock losses. However poisoning of lions in retaliation for livestock loss is still a major cause of the death of adult lions and the key issue to tackle if their numbers are to rebuild. Supporting this project will help stop the decline in their numbers

I am a mathematical ecologist working on the conservation and population assessments of large carnivore populations in both India and Africa. My study species include Tigers, African lions, leopards and cheetahs and I hold a PhD from the University of Oxford and will be supervising Alex on his PhD field research in Uganda. I will also be implementing several workshops with the Ugandan Wildlife Authority and Wildlife Conservation Society on the density estimation of African carnivores.

1 Lab Notes Posted
Why is it important to count big cats?