Parrots are the most threatened major group of birds, with many wild populations declining in response to logging or other forms of human habitat destruction. However, several parrot species have taken advantage of human activity, managing to escape from captivity and establish naturalized populations far outside their native range. We will study native monk parakeets (Myiopsitta monachus) in Uruguay to ask how behavior, morphology or genomes change in response to climate and human activity.

Parrots are the most threatened major group of birds, with more than 40% of species listed as near-threatened or worse. However, several parrot species have taken advantage of the global pet trade to colonize areas outside their native range. Beyond conservation concern, these parrots are natural experiments to understand why some species can withstand climatic change and human habitat destruction.

Native to South America, monk parakeets are now found in Europe, North America, the Middle East and Japan. Both native and non-native parakeets may have adapted to human habitat destruction, and may use large communal nests and feather coats as thermal buffers. By studying monk parakeets, we will learn more about species' evolutionary responses to human disturbance and climatic change.

Monk parakeets may have adapted to human disturbance or different climatic regimes. Nest-building behavior could change rapidly as individuals learn and transmit knowledge to others. Morphology (e.g. size) may also change in response to climate, although more slowly than behavior. These responses to different climates and human-altered habitats may have become encoded in parakeets' genomes.

We will study insulative capacity of nests, flexibility in nest-building behavior, morphology, and genomic changes in native monk parakeet populations. Evolution is often considered a phenomenon detectable over long timescales. Our research will contribute to a better understanding of how human activity on contemporary timescales can influence evolutionary processes.

The overarching goal of this project is to support data collection and establishment of long-term field sites in Uruguay. My international travel and in-country housing will be supported by a Fulbright study/research grant, but we need additional funding for in-country travel, supplies to catch birds (active or passive traps known to safely catch parrots) and record temperature data associated with nests (iButtons). Fieldwork will take place from March-November 2017, across a gradient of human habitat disturbance. This work will lead to collaborations among scientists in the U.S. and Latin America, with long-term field sites that will facilitate powerful comparisons of behavior, morphology and genomes across native and introduced monk parakeet populations.

These budget items will be critical support for traveling among field sites, constructing and baiting active or passive traps to safely catch parakeets, as well as measuring temperature and humidity inside/outside monk parakeet nest chambers.

I will rent a field vehicle through la Universidad de la República while evaluating potential field sites. These vehicles are in high demand, so I plan to rent or purchase a used vehicle after choosing field sites. As I'm currently searching for more funding to rent or purchase a vehicle, I anticipate using the in-country travel line item towards gas or diesel (around $6/gallon in Uruguay).

My international travel and in-country housing/food are supported by a Fulbright Study/Research grant, but I need additional funding for research to ensure a successful field season. I hope you will back this project if you find the questions interesting!

This exciting and innovative project will give us important new insights into why some species have become such successful invaders of human-altered habitats. As Grace's graduate mentor and fieldwork colleague, I can attest she is well-qualified to conduct this groundbreaking research.

Timothy F Wright
Professor of Biology
New Mexico State University
This exciting project tackles one of the main questions related to the increasing of human modified habitats, how animal withstand these alarming changes in habitats. Grace´s background combines different disciplines that makes her the best person to make this project success 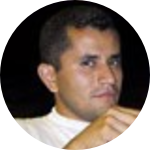 Alejandro Salinas-Melgoza
Associated Professor
Universidad Michocana de San Nicolas de Hidalgo
As a researcher who studies human-avian relationships, particular pet birds. It is a fascinating question--why are some introduced species successful enough to establish naturalized populations while others die out? This is crucial information as the increasingly vulnerable wild populations face habitat loss and climate change. I look forward to seeing the results of this project. I think highly of Kevin Burgio's research and know he is well qualified for this investigation. 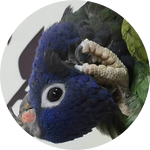 Patricia K. Anderson
Associate Professor
Western Illinois University
As a researcher who studies the spatial ecology of monk parakeets nesting on electric utility structures, I endorse Grace and Kevin as well-qualified to conduct their monk parakeet research. I anticipate their investigation of the insulative capacity of nests and plumage morphology may prove or disprove the belief that monk parakeets are attracted to and build their nests on electric utility transformers for warmth. This information will increase scientists' understanding of how some species use human-disturbed environments successfully. 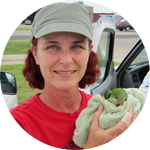 Janet E. Reed, PhD
Wildlife Biologist
Despite the popularity of monk parakeets as pets, we actually know very little about how they behave in the wild. Grace's project will provide critical data and will build a solid foundation for future work to better understand the links between social behavior, environmental conditions and tolerances, and species invasions. 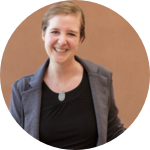 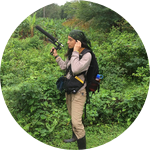 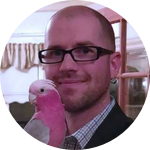 I'm currently studying an introduced parrot as a model to
understand how species respond to global trends in human activity. I grew up traveling between my hometowns in Rhode Island and Nicaragua, and have maintained an interest in collaborating across international boundaries.

I pursued my scientific and cultural interests at Haverford College, where I majored in Biology and Spanish. I became interested in using parrots as models to ask evolutionary questions while volunteering at Foster Parrots Ltd/The New England Exotic Wildlife Sanctuary, and reading the literature about the evolution of vocal learning.

I joined the Wright Lab at New Mexico State University in Fall 2013 as a new PhD student on the monk parakeet research. Since then, I've collaborated with a former lab mate on hummingbird visual and vocal learning, co-developed a package in R for streamlined bioacoustics analyses and created genomic libraries of monk parakeet populations across the U.S., Spain and Argentina. I'm working on bioinformatics analyses with this iteration of genomic data, and preparing for a 9 month Fulbright field season in Uruguay next year to study native monk parakeets across a gradient of human land-use.

I've been fortunate to count on many excellent mentors and collaborators, and look forward to upcoming collaborations with the monk parakeet research. Check out my CV through the Wright lab website, or my GitHub blog for code (right now mostly related to map-making). If you're interested in bioacoustics analyses, check out warbleR, co-developed by Marcelo Araya-Salas, available on CRAN and GitHub, also recently published as an application paper in Methods in Ecology and Evolution.

Aside from looking for salamanders, frogs, and worms with my daughter, I am broadly interested in the mechanisms of species range limitations and how disturbance (climate change and habitat fragmentation) influences species distribution patterns and extinction processes. My research focuses on using an integrative approach to understanding parrot distributions; the ecology, biogeography, and assembly of vertebrate communities; and extinction in parrots and parasites.

I am in my last semester of my PhD program and will be defending my dissertation in December! In my dissertation, I explore the extinction of the Carolina Parakeet, the only parrot endemic to the United States, in addition to creating a framework to prioritizing global parrot diversity conservation in the face of climate change. Despite being PhD candidate, I have published research ranging from championing parasite conservation, to large scale rodent diversity, to theoretical ecology. My CV can be found here.

Prior to graduate school, I conducted research on Monk Parakeets in efforts to come up with a non-lethal method of preventing them from nesting on utility poles - this work can be found here! This research has led to a patent and an agreement with a Connecticut-based manufacturer to build devices we believe will be a solution that both utility companies and those who care deeply for these parrots will support. For more information, please see this article. Lastly, to burnish my Monk Parakeet cred, I authored the revision of the Birds of North America account which will be published next month by Cornell University and AOU!

We are happy to provide more details to anyone who backs this project, especially in regard to any concerns about how birds will be treated in the field, or any questions regarding details about genomic changes or rapid adaptation, as our space above is limited.