Mycorrhizae are fungi that live in the soil and form partnerships with plants, providing hard-to-find nutrients like nitrogen and phosphorus in exchange for sugar. Plants that rely on mycorrhizae tend to perform poorly in areas where their partners are not present. This project's goal is to test whether establishing mycorrhizae on American chestnut seedlings in the lab can improve their growth and survival in the field.

The American chestnut was once the dominant tree in forests in the eastern United States, occupying a range that extended from Maine to Tennessee. In addition to providing forage for wildlife, it was an economically crucial member of the Appalachian forest. A popular anecdote refers to the chestnut as the "cradle-to-grave" tree, since its sturdy, rot-resistant wood was used in both cradles and caskets. Large picnics were held under the trees' wide canopies in the summer, and pigs were fattened on the nuts in the autumn. In 1904, the Asian chestnut blight arrived in the United States, carried there by chestnut specimens imported from Asia. This blight was lethal to American chestnuts, and, in a matter of a few decades, the tree was functionally extinct. Today only a few wild trees survive.

Past research on the benefits of mycorrhizae has been inconclusive, especially because much of it it was carried out before the preferences of many mycorrhizal groups for specific tree species was understood. Furthermore, much of this research has focused on conifers, and so we know much less about the mycorrhizal relationships of broadleaved trees.

The restoration of the American chestnut will be an arduous process, due to an initially low availability of blight-tolerant trees and because it will take time for these initial plants to reach reproductive maturity. It is therefore vital to ensure that these early trees get the best chance at survival possible, and mycorrhizae may help!

I've already started the field work and I just need around $500 to send DNA out for sequencing. This step is vital to identify all the fungi found on the roots of the chestnut trees. Any additional funds raised will go to pay for transportation to the field sites. 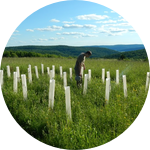 Andrew holds a BS in Botany and a BA in English from the University of Maine. Originally drawn to the world of plants by an interest in carnivores, he eventually moved to habitat restoration, working on a wetland restoration project at UMaine for his undergraduate thesis. His experiences there led him to an interest in belowground ecology and mycorrhizae, where he works now.