In order to examine the capacity for Eastern fence lizards to alter their nesting behavior, we are tracking female lizards during the summer breeding season, which begins in mid to late April and lasts until early August. We will track each lizard involved in the experiment for about seven weeks, during which time we can examine her nesting behavior (where, when, and how she nests, the path she takes to get there from her home range, e.g.) and compare that to her day-to-day behavior when she’s not nesting. We can then make comparisons between all the different lizards we track to see if there is a discernible pattern that emerges to indicate if Eastern fence lizards search through the thermal environment to choose appropriate nest sites, or if there is something else driving their behavior.

In South Carolina, Eastern fence lizards lay up to 3 or 4 clutches of eggs over the course of the summer breeding season. So, the seven-week tracking period also enables us to track each female through more than one nesting period. Our goal is to track through the first two clutches, which should occur between late April and mid-June. We will then be able to make comparisons within as well as among individual females, which will allow a much more thorough examination of our question regarding nesting behavior. 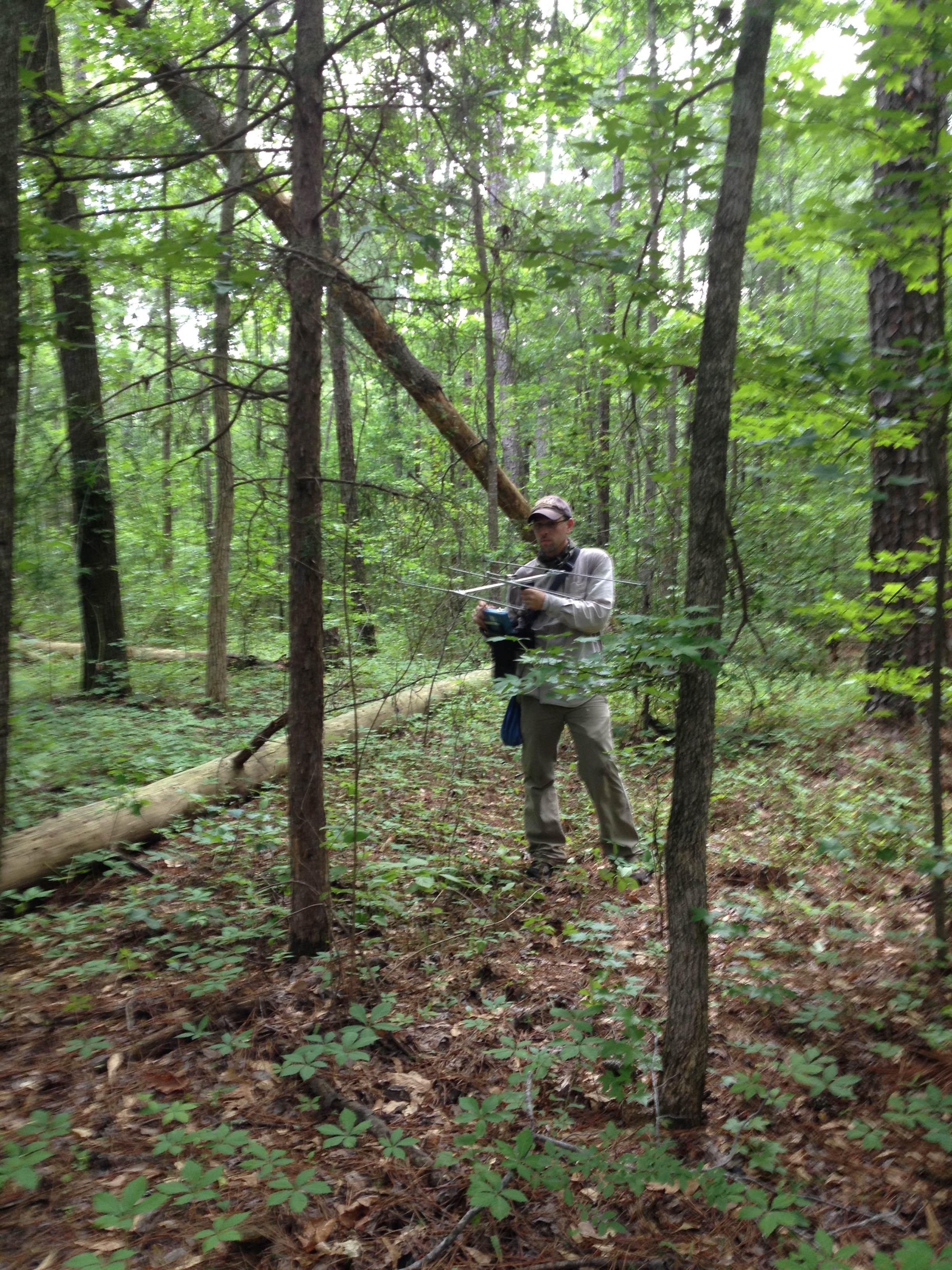 We track the lizards using a method called “radio telemetry,” which involves tagging an animal with a small radio transmitter that sends a signal to a handheld receiver. Our transmitters send pulses at regular intervals at specific frequencies to a handheld VHF radio receiver, which we carry with us while we track lizards through the forest. We use that signal to follow the lizards to their locations. When we find a lizard, we then record their location using a handheld GPS. Then it’s rinse and repeat! Three times a day for about 7 weeks, we hike to each lizard wherever they are in the forest, record their location, and take notes about their behavior in a field notebook (we get in really good hiking shape by the end of the field season!).

In the photos below, you can see a lizard with an attached transmitter and the receiver setup we use, which includes a specially tuned receiver and a yagi antenna, which helps to amplify the signal. The transmitters we use need to be small enough to fit on the back of a fence lizard but have a battery that lasts long enough to complete the tracking we are doing. So, we get custom transmitters, as well as our handheld receiver and antenna, from Wildlife Materials, a company based in Illinois that produces excellent telemetry equipment 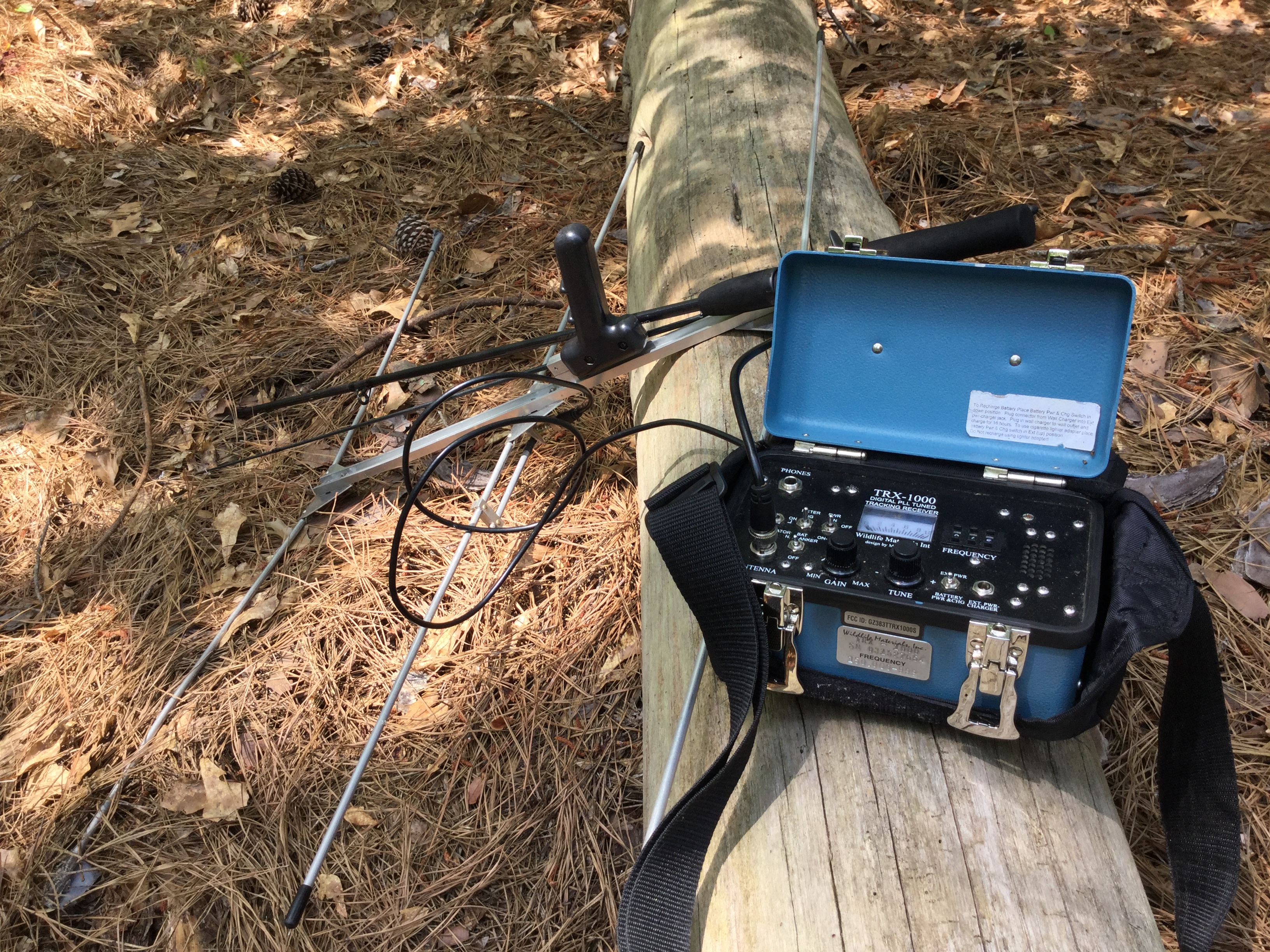 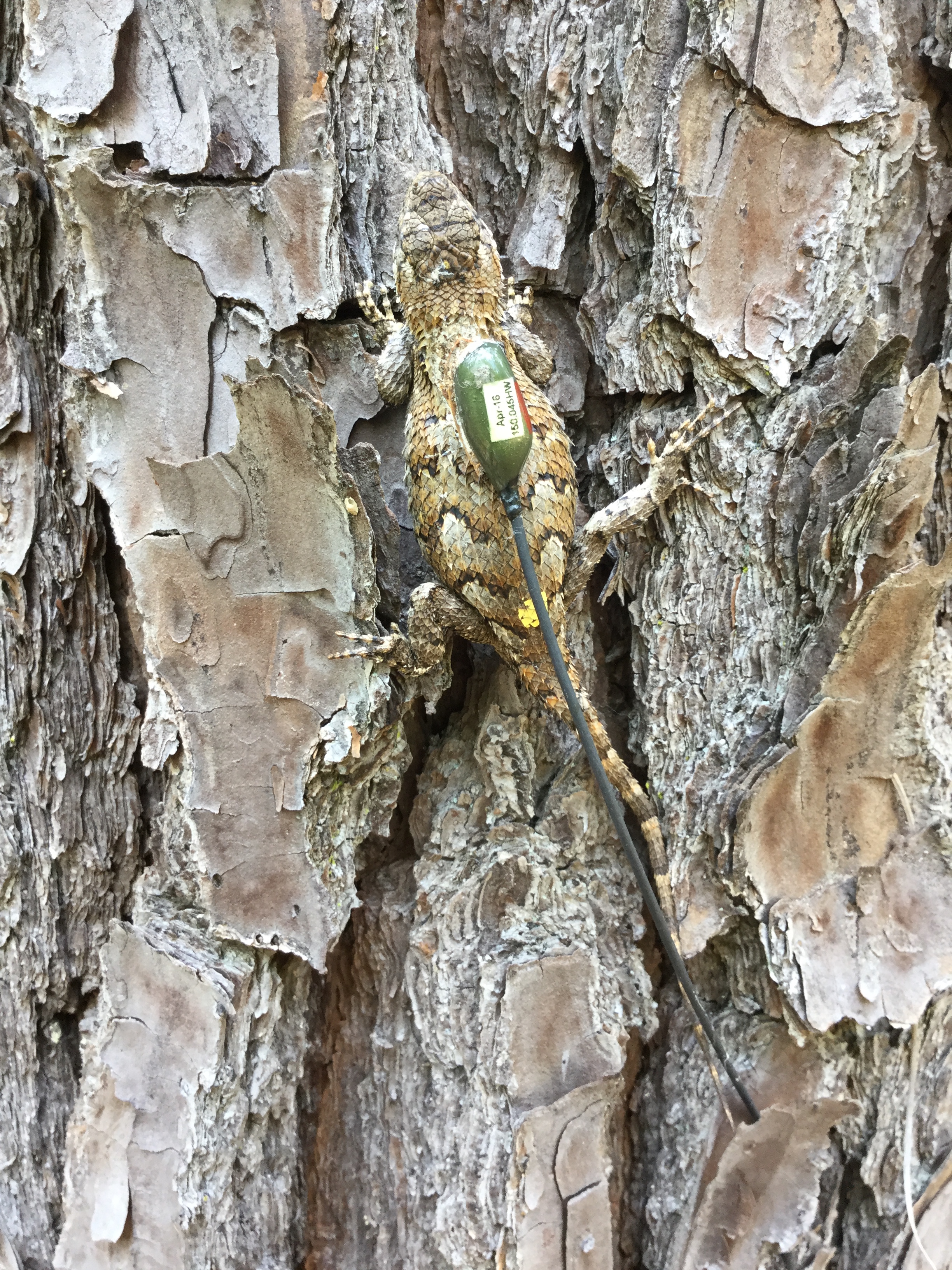 When we track a lizard to its nest site, we take several measurements at the nest site. We measure the depth of the nest and the size of the clutch laid, and we bury a miniature temperature logger in the nest to record hourly soil temperatures for the entire summer. We measure the structure of vegetative cover above the nest site using a spherical densiometer, which is a special piece of curved glass that reflects the forest canopy and enables us to measure the percent shade at a specific location. We also take measurements of soil moisture in the nest at regular intervals using a special type of probe. 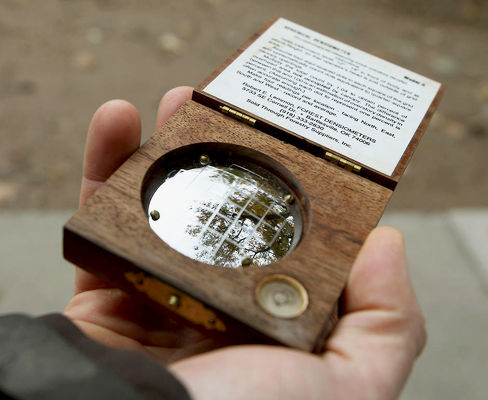 We are also going to gather data to characterize the thermal conditions throughout the habitat. We are taking the same measurements done at each nest site (shade, hourly soil temperature, soil moisture) at randomly generated points throughout the habitat, and we will compare that to the data collected at the nest sites and within each lizards home range. We are also going to obtain aerial photographs of the habitat, which will allow us to examine the vegetative structure and available thermal conditions that each lizard traveled through when going from its home range to its nest sites.

Behavioral research via radio telemetry is not easy work! Hiking off-trail carrying telemetry equipment for an average of about 12-14 hours a day for two months is tough, and things can go wrong for even the most careful, responsible, well-prepared researcher. Our equipment is built tough. Unfortunately, equipment can fail under constant exposure during the field season. So, we make sure to bring replacement parts and repair tools, as well as technicians at Wildlife Materials on speed dial.

Also, transmitters can fall off of lizards sometimes. We secure them using surgical cement, which has a really tight hold. But it can still happen, and when it does it can be difficult to recover that specific lizard again. Plus, you can never get back the time and data lost while recovering from malfunctioning or lost equipment. So, we make sure to have backup transmitters, and we check transmitter attachment on each lizard every day to make sure it is not going to fall off.

Previous work published on the nesting behavior of Eastern fence lizards claims that they nest at night, and they exhibit predictable behavior when doing so that allows researchers to predict when nesting will happen. Well, nature doesn’t like to follow the assumptions we humans make, or the rules we try to establish based on our observations. I have observed the lizards in this population nesting during all times of the day and night, and they often do not exhibit the supposedly typical behavior that other researchers have claimed. If we miss catching a lizard in the act of laying its nest, it is near impossible to locate the nest after it is finished. And if we miss a nesting event, the rest of the data we have spent weeks collecting on that lizard becomes much less useful. So, we track lizards around the clock, through the day and night, when they are close to nesting. During those days that we have lizards carrying eggs and getting ready to lay, Martin and I work in shifts to cover all 24 hours of the day. It makes for a few exhausting weeks, but it is worth it to get the data!

Our main behavioral analysis is going to be done using the GPS data collected on all of the lizards. There are a few options for statistical analyses that we will test, and we will decide on a method after going through the results of each. Without going into the details of the different statistical techniques, they are basically different ways to use all of the GPS points for each lizard to estimate its home range, its travel routes when moving between different parts of the habitat (traveling to its nest sites, e.g.), and the relations between its nest sites its home range.

Our question is whether Eastern fence lizards can alter their nesting behavior in response to changes in the thermal environment. So, comparing behavior within and among lizards through multiple clutches will address that question. We will also examine behavior in a spatial context by looking at the conditions in each lizard’s home range, at their nest sites, and along the routes they took to get to their nest sites. If lizards travel through areas with appropriate thermal conditions for nesting to get to distant nest sites far from their home ranges, that would indicate there is something else driving their nesting behavior. But if lizards seem to be choosing from among the best sites available in their immediate environment, and if that behavior changes between clutches as the summer season progresses, that may indicate a capacity to alter nesting behavior according to the environment.

An interesting result, and one that I do anticipate, is to see variation in nesting behavior between individual lizards. I do not expect all lizards to just choose open, sunny spots to nest. I expect to see variation, with some lizards choosing those open, warmest spots in the habitat, and some choosing shadier, cooler nest sites. It would be interested to find this variation because that would have its own implication for the Eastern fence lizard under climate change. If there are lizards that exhibit alternative nesting behavior, that variation could allow the population to adapt over time (though, the question would then be whether they can adapt at a pace to keep up with rapid climate change).