Environmental exposures can alter gene function by changing DNA. Our project will test whether the amount of sleep you get can modify your DNA through a process called methylation, thus giving us new clues to understand the role sleep plays in our mental and physical well-being.

Gene functions can be changed through environmental exposures or stress, for example exposure to second-hand smoke or trauma. One way a gene's function can be modified is by DNA alteration called methylation. We suspect that the amount and timing of sleep may produce this kind of DNA change and that such changes can affect us, for example, by altering our mood. This might help account for a correlation between short sleep and depressed mood.

Over the past 2 years, we have collected daily sleep patterns of nearly 400 first-year college students across their first 9 weeks of school, along with depressed mood symptoms and pre- and post blood samples. Now we are poised to test whether students who slept only a little have different DNA methylation changes than those who slept a lot.

This study will provide critical pilot data to support future more definitive experiments. We will have a short list of genes showing different methylation patterns from our 6 longest and 6 shortest sleepers. With this list, we can move quickly to testing their effects on sleep behavior in our model system, the nematode.

If sleep affects gene methylation, we can then explore if this relates to depression, to alcohol or drug abuse, to diabetes or to other metabolic disorders, each of which has been linked to sleep.

Our project can propel a major shift in how scientists and doctors think about sleep and can result in improvements in how we can predict and prevent such sleep-related problems. Perhaps our data will also indicate ways that better sleep could reverse some of these problems.

Our current goal is to look at the DNA methylation
in the shortest and longest sleepers as a first step. A lot of hard work has already been done, including getting phenotypes for sleep patterns and mood and collecting DNA samples. We now need to look for a signal telling us that sleep mattered at a molecular level by finding which genes were affected and in what direction (that is, more or less methylation, also called epigenetic changes).

With a list of genes, we can work to understand how they affect mood and behavior. Our quick test will look at genes’ effects on sleep and behavior in the nematode to see how they alter sleep and stress responses in small animals. With your support, we can find these genes!

Watch the video on the front page to see a nematode go to sleep.

Budgeted financing: The blood samples were already collected in a big study of college students funded by the National Institutes of Health and a private donor. The DNA we need has already been extracted from all of these samples. Now we need funding to purchase the specific supplies and arrays to support the methylation analyses: this is why we are asking for your help. 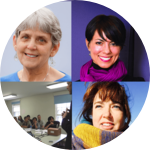 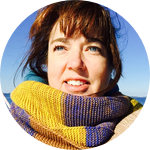 Mary Carskadon, PhD, Professor of Psychiatry and Human Behavior at Brown University. She is the Director of Sleep and Chronobiology at EP Bradley Hospital and an elected member at the AAAS. Mary's research has influenced efforts for later school days. She enjoys science fiction.

Katherine Sharkey, MD, PhD, FAASM, Assistant Professor of Medicine and Psychiatry & Human Behavior at Brown University. Katie also studies sleep in mothers to be and new mothers and loves to sail the bay with her family and Arty, their dog.

Dr. Katie Sharkey is a physician-scientist with a research focus in
human sleep and circadian rhythms, particularly as they relate to mood regulation and women's health. When she is not doing science and seeing patients, she enjoys beautiful Narragansett Bay with her husband, two sons, and their dog, Arty.

7 Lab Notes Posted
Here is some pilot data that may interest you...
Video coming soon...
Scenes from the Sleep for Science Lab,

Our recent work at the Sleep Lab has also been featured in a number of press and media outlets:

Look! Sleep in the nematode!


Here's a student filling out a sleep diary at the start of the 2012 study. 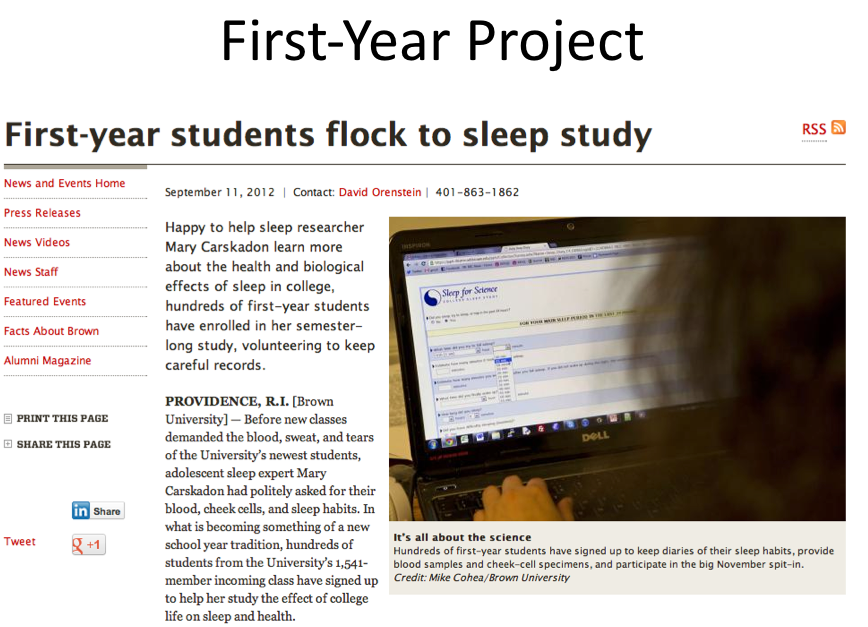 College Sleep Team: Our staff poses after signing up students to take part in the study! 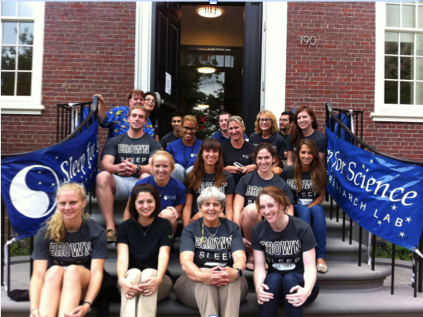 Scenes from the Sleep for Science Lab, where we do other kinds of sleep research, for example our summer study of sleep and youth.