Acoustic tags have been used in Bimini, the Bahamas to determine the habitat use of at risk shark species for several years; these tags emit sounds that are detected by acoustic receivers and then translated into individual shark detections. I will be determining what effect environmental factors have on Vemco acoustic receiver detection efficiency in Bimini. This will help reduce bias in current datasets and more accurately predict shark habitat use in future studies.

My research in Bimini will determine the effectiveness of Vemco acoustic receivers in detecting acoustic tags in their vicinity; this will ensure that data being collected for current and future studies at the Bimini sharklab is as accurate as possible. Current studies are using acoustic tags to determine the effects of provisioning on hammerhead shark movement, as well as the habitat use of juvenile lemon sharks in response to noise pollution, light pollution, and habitat degradation resulting from ongoing shoreline development.

I am inspired to work on this project because I believe that the root to all good science is accurate interpretation of collected data. For more information on ongoing shark research being completed at BBFSF please visit the BBFSF website.

Bimini has long been important habitat for shark species as it borders the gulf stream and works as a shallow refuge for many juvenile shark species including lemon sharks which have been shown to have natal philopatry to the area. As tourism increases in Bimini over time with the construction of new resorts and increased 'eco-tourism' centering around its shark population, it is important to learn of the habitat use of key species to attempt to protect their critical habitat from development and degradation. My research will help to provide context as to how accurately sharks are being detected by acoustic receivers and to better understand the true habitat use and movement of these sharks in future studies.

It will also inform other researchers on factors impacting detection range.

The goal of the project is to come up with concrete error margins and detection ranges of Vemco acoustic receivers in Bimini and to determine the true effect of environmental factors such as salinity, suspended particles and temperature have on their detection efficiency. I will be using a combination of placed acoustic transmitters and dynamic acoustic transmitters at 10 acoustic receivers around Bimini from the beginning of January to the end of March. At the end of this time frame, I will download the receivers' collected data and determine what proportion of known 'pings' from the transmitters were detected by receivers. I will then relate discrepancies between expected detections and actual detections to the environmental data collected over this time.

The research I am completing is planned to require 3 months and 10 days of field work in Bimini, the Bahamas, during which I will be using the Bimini Biological Field Station Foundation (BBFSF) facilities. This lab charges fees for lab use and accommodations of 950$ per month plus 41$ per extra day. I am attempting to raise enough funds to cover roughly half of my monthly costs.

During my research, I will be using small outboard motor boats to reach points around Bimini where Vemco receivers are placed and to place Vemco acoustic transmitters for my study. My secondary cost is to cover equipment and fuel used during field work.

In order for my research to be used properly for future studies, I will be publishing my results which costs on average about 150$ per page. I am estimating my article page length to be at least 4 pages.

Acoustic telemetry is an incredible tool for understanding movements of aquatic animals. However, there is a need to determine the environmental factors impacting the effectiveness of this technology. This project will help to advance our current research and conservation efforts. The data obtained from this project will help to support numerous telemetry projects in both Bimini and abroad. 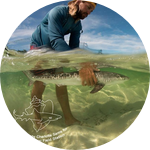 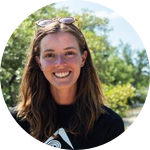 Established & incorporated in 1990 by Dr. Samuel Gruber, today the Bimini Biological Field Station Foundation (BBFSF) is a 501 (c)(3) non-profit organization located on the island of South Bimini, Bahamas. The mission of the BBFS Foundation is to advance our knowledge of the biology of marine animals especially theheavily impacted elasmobranch fish fauna (sharks and rays).

As an enthusiastic honours graduate, I am passionate about the study of elasmobranchs and marine ecology. I have extensive experience in field and laboratory research on a variety of subjects: marine biology, shark and ray ecology, aquatic ecosystem health and riverine fish ecology. I am especially interested in the use of biotechnology in studying elasmobranch habitat use and the effectiveness of marine protected areas in preventing species population declines.