Malaria is a parasitic disease spread by mosquitoes. Thus, controlling mosquitoes is the key to controlling malaria. Conventional approaches to vector-control rely on broad-spectrum insecticides, but they are losing their efficacy as mosquitoes develop resistance. This project aims to develop male-specific chemosterilants for the principal malaria mosquito in Sub-Saharan Africa, Anopheles gambiae. Our goal is to apply the “Sterile Insect Technique" (SIT) to A. gambiae by releasing sterilized males to compete with wild mosquitoes for mates, thereby reducing mosquito populations without the use of insecticides

Our goal is to chemically sterilize the male Anopheles gambiae mosquito to reduce the spread of malaria in Africa. The reason to target the male is that only female mosquitoes bite people, so releasing sterilized males poses no risk of disease. Our current target is a male-specific enzyme called A. gambiae transglutaminase, or AgTG3.

Transglutaminases bond proteins together to form a cross-linked mesh or gel. The A. gambiae male uses AgTG3 to crosslink a protein called Plugin, coagulating his semen into a gooey plug that he pushes into the female. This ‘mating plug’ is required for the female to store his sperm, so chemical inhibitors of AgTG3 should be specific chemosterilants of A. gambiae mosquitoes.

We have already purified AgTG3, developed assays for its activity, and identified several chemical inhibitors. In this project we will synthesize additional inhibitors in order to:

Malaria is the world’s most devastating parasitic disease causing ~1 million deaths per year, mostly children under the age of five in Sub-Saharan Africa. The war against this disease is tough: there is currently no vaccine, malaria parasites are developing resistance to current antimalarial drugs, and insecticides. Therefore, we must develop new tools to continue the fight to control, and eventually to eradicate, malaria.

The Sterile Insect Technique (SIT) has been successfully used to control many insect pests including the cattle screwworm fly, the Mediterranean fruit fly, and the tsetse fly. Yet SIT has never been successfully deployed against malaria. This is largely due to logistical or regulatory barriers to previous methods of sterilization: γ-irradiation and genetic modification.

Chemosterilization was successfully tested in mosquitoes as early as the 1970s, but never implemented due to environmental concerns related to the chemicals involved. If successful, our research has the potential to provide a new class of specific and environmentally friendly chemicals to facilitate the application of SIT in the fight against malaria.

Your donation will be used directly to employ an experienced research
chemist at an hourly rate to synthesize and test inhibitors of AgTG3. Our funding goal will allow this researcher to scale up synthesis of our best inhibitor specifically on this project.

Your donation will be matched by additional funds to cover the required health benefits and all the material costs required for these experiments. Backers will receive regular updates on the compounds synthesized and their activity as inhibitors of AgTG3.

We are committed to the dissemination of our research to the public: our results will be published in scientific journals adhering to the Open Access model, with acknowledgement of funding from Microryza backers. Should we be successful in determining the atomic structure of AgTG3 in complex with any inhibitors, this data will be deposited in the publicly accessible Protein Databank.

This work will be performed by a research chemist under a contracted
hourly rate. Working in partnership with other researchers, the funding goal will allow our chemist to scale-up our pilot synthesis to provide sufficient material for in vitro kinetic assays and to pursue crystallographic studies of the enzyme-inhibitor complex. 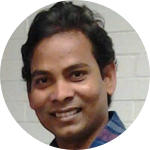 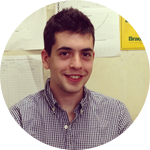 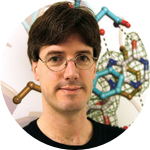 Hi, my name is Tapan Kanai. I have a Masters Degree in Chemistry from
Utkal University in Bhubaneswar, India and ten years experience in asymmetric synthesis as a Research Scholar at the Department of Organic Chemistry at the Indian Institute of Science (I. I. Sc), Bangalore, India and in materials chemistry at the Naval Materials Research Laboratory (NMRL). I am currently a Research Associate in the Department of Chemistry at Yale University.
Malaria is prevalent in Odisha, a state of India (see here) where I received my education, so I am very excited at the opportunity to use my expertise in developing new tools to control mosquitoes that transmit it.

I am a Research Associate at Department of Chemistry, Yale University. Presently, working in interdisciplinary research; biophysical study of protein bilayer formation. My future project in Prof. Baxter's lab, focus on the synthesis of new inhibitors of Anopheles gambiae Transglutaminase 3 (AgTG3).

I'm a senior at Yale University majoring in chemistry. My independent research project, a collaboration between the laboratories of professors Richard Baxter and Andy Phillips, involves synthesizing and characterizing specific inhibitors of Anopheles gambiae transglutaminase 3.

I am an Assistant Professor in Chemistry at Yale University. My laboratory is interested in the innate immune response of arthropods, especially the complement-like system in Anopheles gambiae, host-pathogen interactions, and the development of new chemical entities for the control of vector-borne disease. Our primary research tools are biophysical and structural analysis, biochemistry and chemical biology. Our approach is multi-disciplinary and interfaces with both cross-campus and international collaborators studying vector biology and infectious disease.

Congratulations, we are funded!

Home for the holidays, but we've learned how to...

Here is a picture of our lead inhibitor from the pilot...