Deep-sea sharks: do they survive? As it turns out, it is sort of a matter of perspective.

Sharks & Stable Isotopes: Making the most of mortality

Validation of a portable, waterproof blood pH analyser for elasmobranchs

Shark populations are being fished at unsustainable levels throughout much of our oceans. Because deep sea sharks grow slowly and have few offspring, they are particularly susceptible to overexploitation. We hope to better understand the effects of capture on two species of deep sea sharks, the gulper and the Cuban dogfish, as well as identify their chances of survival if released alive. Visit the abstract page for more details!

My project focuses on Cuban dogfish and gulper sharks, two of the most commonly captured bycatch (non-target) species in deep sea fisheries worldwide. These sharks are representative of entire groups of related species at depths between 200 and 1,000m deep. They are often caught accidentally in commercial snapper and grouper fisheries and experience high mortality rates when pulled to the surface due to severe temperature, pressure, and light related stress. If they are alive at the boat, they are either released as bycatch and presumed to survive, or, conversely, killed at the boat under the assumption that none will survive after release.

A past study in Eleuthera, The Bahamas, deployed 11 satellite tags on gulper sharks, and received data from only two. Both of these were badly damaged and showed signs of predation close to the capture event. As such, we believe that even those sharks released alive are being either consumed on the way back down or perish shortly thereafter as a result of capture. On the other hand, deep sea trawl fisheries assume that all captured sharks will not survive, and as such vessels remove their livers before throwing them overboard. If our data suggest that some species can survive, then a selective release measure can be implemented for animals caught in the appropriate depth zones.

So how can fisheries models assume 100% mortality, or nearly 0% mortality, without basic estimates of post-release survivorship? The answer is that they simply cannot. As you can imagine, this leads to a troubling conclusion: fisheries models are likely underestimating the impacts of capture on deep sea shark populations or, through blanket regulations, allowing the killing of sharks that would otherwise make it.

As such, our research aims to fill gaps in our ability to responsibly manage fishing effort in the deep sea. It is the next step in a series of ongoing projects out of the FSU Coastal and Marine Lab and our collaborators at the Cape Eleuthera Institute.

Management decisions rely on accurate estimates of at-vessel mortality and post-release survivorship. For these sharks, we have little to none of the latter.

Our project will help managers put the true price on the effects of fishery capture in the deep sea. The gulper sharks and Cuban dogfish were not chosen randomly; they are representative of the dominant groups of sharks captured in deep sea fisheries worldwide. As such, our research will improve the ability of fisheries models to predict the true cost of bycatch in temperate and tropical waters around the world for not only these species, but entire assemblages of related fishes.

Furthermore, it will set the stage for future studies on the habitat use and migration patterns of these animals, particularly research documenting the long-term impacts of a capture event or even a toxic oil spill.

This project will serve two main objectives: a research component and an education component.

We will answer the following questions:

1) What is the estimated at-vessel longline mortality for deep sea sharks in tropical waters?
2) How does longline capture duration affect Cuban dogfish and gulper shark mortality and blood chemistry (i.e. levels of stress)?
3) What are the short term post-release survival probabilities for gulper sharks and Cuban dogfish?

In addition, through the novel use of deep sea cameras, we hope to improve on past studies using cages to estimate fishery discard mortality.

Second, we will be using this project to teach an Applied Research course at The Island School, an experiential learning, high school semester abroad program in Eleuthera, The Bahamas. We are extremely fortunate to work in collaboration with both the Cape Eleuthera Institute and The Island School as the partnership improves our quality of work and provides the opportunity to involve students in our research. Over the semester, students will read scientific literature, collect data, and work towards the completion of a professional poster and presentation. They will communicate our results to countless Caribbean NGOs, visiting scientists, and government officials at the conclusion of the semester. In turn, our findings will have an immediate impact on the management policies of the Bahamas and surrounding nations while simultaneously inspiring the next generation of marine scientists.

This funding will cover the majority of equipment costs required for me to complete this project. Most of what we purchase will be useful for studies in the future as well, so the funding will go a long way!

Brendan is highly skilled in handling sharks and teleost fishes, he has been an asset to an array of marine projects ranging from seagrass and algae surveys to monitoring teleost fish and turtle populations, is creative and innovative in his ability to overcome obstacles, is considerate to teammates, and communicates knowledge with clarity and enthusiasm. Brendan's passion for sharks and the conservation of the marine environment are contagious, his work ethic exceeds expectation, and I endorse his latest endeavor wholeheartedly. 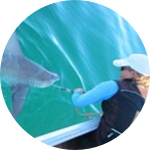 Cindy Bessey, PhD
Marine Research Scientist with the Shark Bay Ecosystem Research Project
This project addresses critical questions for responsible marine conservation, with clearly defined, realistic goals and a fiscally responsible budget. I have known Brendan for 8 years as a university club adviser, teacher, and research adviser. Brendan is an exceptional budding scientist with a superlative work ethic and intellect. He will complete this project in an exemplary manner. Given the conservation value of the research project combined with the character of the primary investigator, I give it my unconditional support. 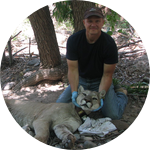 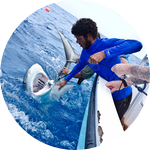 Brendan Talwar
I am originally from Louisville, KY and have pursued a career in marine biology since I first began fishing along Florida's gulf coast. Since then, my work has taken me around the world, from Shark Bay, Australia to The Bahamas.
- Research

My principal co-investigators are described below:

Dr. Dean Grubbs
Associate Director of Research, FSU Coastal & Marine Lab
My primary research interests are in ichthyology and marine ecology with an
emphasis on the biology of exploited estuarine and marine fishes. Much of my research addresses specific questions or fills specific biological gaps necessary for management of fisheries resources.
- Research

Dr. Edward Brooks
Shark Research and Conservation Program Director, Cape Eleuthera Institute
Our program was developed to increase the capacity of basic and applied shark research and conservation in The Bahamas. We run a variety of research projects and have become a hub for shark research and education around the world.
- Research

26 Lab Notes Posted
Deep-sea sharks: do they survive? As it turns out, it is...
Sharks & Stable Isotopes: Making the most of mortality
New publications: Micropredators and Blood For a great overview of the deep sea work being done here at FSU and through the Deep-C Consortium, check out PBS' Changing Seas:
- Creatures of the Deep

I do an outreach component for most projects I work on, and film has recently captured my attention as a creative way to communicate a scientific idea. In 2012, my friend Ian Rossiter and I created a short film called The Story of Sharks which has since won international awards and is now showing daily at SeaWorld South Africa! Check it out below: I plan on gathering footage in Eleuthera and creating a video for this research as well. This can supplement scientific publications as a way to engage elementary, middle school, and high school students in our research.