Many people know that pollinators (especially bees) are in trouble due to habitat loss, improper pesticide use, diseases, and environmental changes. This program gives South Dakotans a chance to participate in pollinator research directly by observing and reporting pollinator activity in their own backyards. In return for their efforts, project participants will learn how to create and conserve pollinator habitat in their community.

Pollinators are economically important and in the news because of their imperiled status due to habitat loss, pathogens, improper pesticide use, and environmental changes. A Cornell University study estimated that insect-pollinated crops were worth $29 billion in 2010 (Calderone 2012). Many of the fruits and vegetables that home gardeners grow either require insect pollinators (e.g. squash, melon, and apples) or their yields are improved by pollinator visits.

The public is also aware of the problems pollinators are facing from the extensive coverage in the popular press of colony collapse disorder (CCD) in honey bees. The bumble bee deaths caused by an off-label pesticide application in Oregon also brought attention to pollinator protection.

I established this project to better understand the abundance, distribution, and diversity of pollinating insects in South Dakota. I also wanted to create a program that would give the public an opportunity to actively engage in pollinator research, since I routinely get calls from clients who are concerned about the fate of bees and want to do something to help.

Participants in this project will learn about the flora and fauna present in their community, increase their awareness of pollinators and pollinator conservation efforts, and obtain tools to create and conserve pollinator habitat where they live.

This project will result in a spatial and temporal snapshot of pollinator abundance and distribution in South Dakota. I hope to use the results of this research to focus future pollinator conservation efforts in the state. Knowing what pollinators we have, where they are geographically, and when they are observed in residential areas will help me, as an Extension specialist, create more detailed recommendations for clients seeking to add pollinator habitat to their yards and communities.

In addition to the pollinator observations, the citizen science aspect of this research is also valuable. Through pre and post event surveys I will be able to use that feedback from participants to improve the project in 2015 and see if this project has changed any of the participants’ behaviors (e.g. pesticide use, addition of pollinator friendly habitat).

I began this project in the summer of 2013. 2013 served as the pilot year and 19 volunteers completed 4 weeks of observation in July and August. They submitted over 550 observations and ~400 insects collected in bee bowl traps.

Insect curation supplies - pins, pins and more pins! Also, foam for my Cornell drawers. I will be putting together at least one display drawer that will showcase the insects sampled from this project.

Shipping/postage - I need to send the bee bowl kits to most of the participants (and include return postage so that I get the insects they collect back to my office).

In-state travel - I am based in Pierre, so it's ~3 hours to get to the major cities for workshops with the participants.

Out-of-state travel - I would love to present this research in Portland at the 2014 Entomology Society of America meeting, but getting out of South Dakota is expensive!

Excellent project which has linkages to existing citizen science projects, horticulture based Extension programs, and the agriculutural community.

Rosemarie Nold
Extension Ag & Natural Resources Program Director
This project is an excellent way to introduce participants to the amazing world of insects while increasing awareness of pollinator conservation efforts in South Dakota. Gardeners of all ages can help by planting and promoting pollinator gardens throughout the community. 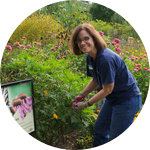 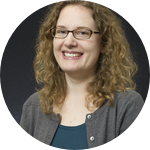 I started studying entomology in eighth grade (thanks to Science Olympiad), and never stopped. While in grad school, I had the opportunity to teach entomology to high school students, Master Gardeners, and kids of all ages.

As a Consumer Horticulture Field Specialist for SDSU, I am working to increase the use of native plants in landscapes and highlight the plant and insect biodiversity in backyards across the state.

Amanda published an article in September about the project's progress here.

The 2013 observation locations are indicated by the blue circles on the map below. If you live in South Dakota, and are interested in being a citizen science volunteer for 2014, check out the project launch webinar on March 17.

She also wrote a series of articles on native plants in South Dakota. Her favorite native plant for pollinators and butterflies is Asclepias tuberosa. A few of the bees spotted by one of the 2013 participants. A sampling of the insects collected from the bee bowls.