Animals that rely on challenging resources can perform better if they share information. Can information sharing cross species boundaries?

I will study interactions among birds that follow army ant raids. The bonanza of prey at raids is offset by raid mobility and wide spacing. Multiple bird species attend raids and interactions within and between bird species could affect birds' performance. Automated tracking of bird interactions will reveal whether birds share information. Do birds cooperate or eavesdrop other birds? Do strategies differ among bird species?

The main goal is to test whether and how birds rely on other individuals- from the same or different species- to exploit a complex, challenging resource (food rich, but rare and mobile, army ant raids). I will address the goal by following the behavior of bird species known to exploit army ant raids. I will use automated radio tracking and live observations of banded birds to record patterns of bird movement among ant colonies, and associations among birds.

Army ants raids are massive swarms that move like a blanket of ants through the forest, driving out insect prey as they go. Flocks of multiple bird species form at most army ant raids. However, the probability a naïve searching bird will encounter a raid is low. Raids are small, rare and randomly spaced. The ants do not raid every day and colonies regularly move at night across distances of 100 yards or more. Daily uncertainty of raid occurrence and location challenges birds. My preliminary observations suggest birds can lose track of colonies that emigrate after dark. Colonies also move into and out of birds' feeding ranges. I will test whether birds rely on interactions with other birds, within and among species, to enhance army ant exploitation.

I will use EncounterNet, an automated system, to collect data. Small EncounterNet radio tags are placed on the birds with leg harnesses (designed to fall off soon after the tag battery fails). Base stations are mounted near army ant colonies, and moved through the forest as the ants migrate to new nest sites. EncNet records when tagged birds move to within detection range of base station receivers (placed at key locations, in this case at army ant colonies) and records bird interactions (distance, time, and duration of tagged birds coming within detection range of each other- EncNet tags can communicate). Data can be collected from both tags and base stations remotely without recapturing or disturbing birds. The study will assess whether bird species play consistent roles in finding and tracking army ant colonies, and whether within or between bird species interactions affect army ant exploitation.

I will determine which birds of each species associate with each other, including time budgets and proximity measures. I will also track which army ant colonies each bird visits, and the ordering of bird visits in time. The EncNet system will collect continuous data (identity, time and distance) on bird associations and on bird visits to army ant colonies. I will be able to assess which birds arrive first at ant colonies and the order of later arrivals, and whether birds that are ignorant of a colony's location (did not visit a colony that moved on the previous day) arrive in the company of experienced birds. I will complement EncNet data collection with live observations of birds at raids and bivouacs. During these observations I will note interactions among birds including aggression/displacements. Live observations will also confirm details such as coordinated departures and arrivals.

Research Questions. A. Do raid attending birds divide the labor of ant exploitation? I will assess whether raid attending species play consistent roles in ant location and tracking, or in flock formation. Alternatively, if individuals have changing roles over time there may be reciprocal payoffs to bird associations at army ant colonies. Do some raid attending bird species (or individuals) consistently function as leaders (first to find raids or bivouacs)? Alternatively, is there potential for interspecific reciprocity (indicated by birds switching between leader and follower roles)? B. Following behavior. Do birds travel together in single or multiple species groups between raids? Do informed individuals lead naïve individuals to army ant colonies?

Sampling effort: Subjects will be the six most frequent raid attending species that are large enough to support EncNet tags at the study site: Blue-crowned Motmot, Orange-billed Nightingale Thrush, Rufous-and-white Wren, Ruddy Woodcreeper, White-eared Ground Sparrow, and White-throated. A pool of approximately 100 raid-attending birds is already color-banded at the site. I will capture birds in mist nests placed at army ant raids and nest sites. Mist netting at ant nests was effective in summer 2012 and April 2013; based on previous netting success I expect to radio-tag all subjects with three weeks of netting effort. I will color band all known raid-attending birds for individual ID. I will survey a core study area to locate and place base stations at up to 10 army ant colonies (15 base stations total- some will be placed at both raid fronts and nest sites). I will net, color band and radio tag birds in this area. I will tag 10 individuals of each of six target bird species (60 tags deployed). Tags and backpack harnesses will weigh 1.3 g, permitting deployment on birds above 26 g body weight. Battery life of approximately 3 weeks is expected.

Main intellectual payoff: Bird/army ant interactions provide a rich and unique opportunity to learn how within- and among-species interactions affect animals' abilities to exploit valuable but challenging resources. Army ant exploitation presents complex cognitive challenges to birds. The birds must track multiple resources (army ant colonies) across space and time, in the company of potential competitors from their species and other species. Bird interactions while exploiting army ants are an excellent opportunity to test how interactions among animals- information sharing- can affect animals' abilities to solve complex problems. Learning about social and ecological information sharing in other species- the complex dance of cooperation, reciprocity, and stealing information- can be of value to understanding human interactions as well.

A few complex ecological challenges are well studied, including bird's abilities to store food items for later retrieval (food hoarding). Animals that solve these complex challenges have special behavioral and cognitive abilities, such as enhanced learning and memory capacity. We are beginning to appreciate the birds do not go it alone. Recent research on these systems emphasizes the importance of social interactions- animals sharing information with other members of the same species. New evidence suggests bird interactions, both beneficial interactions with kin or other affiliates and costly interactions with competitors or information parasites, can affect foraging success. For example, birds that hoard food items can be robbed when birds of the same species observe their actions; food-hoarders behave to minimize risk their caches will be pilfered. Army ant exploitation presents complex cognitive challenges to birds. The birds must track multiple resources (army ant colonies) across space and time.

The ant/bird study system is unique because birds regularly forage in the company of other birds; flocks often contain birds from multiple species. The study site in Monteverde, Costa Rica has a rich array of over 75 species of birds that attend raids. Bird species vary in frequency of attending army ant raids. Pilot observations suggest some local birds may travel in mixed-species groups among raids. There is great potential for interactions both within and between bird species: I will assess whether birds rely on their own ant-tracking abilities, as opposed to sharing information with (or stealing from) other birds. Interactions may include information parasitism, reciprocity (switching leader and follower roles) and mutualism (cooperation). The data I collect will contribute to our understanding of animal cognitive abilities in complex ecological settings.

The project will support development and deployment of powerful new technology in the field. Automated collection of the bird interaction data will allow unprecedented access to the details of the ecological network- army ants, and birds of multiple species- in ways that would be difficult or impossible using standard observation methods. After the tags are placed on birds, human interference is minimal. Data are collected simultaneously and continuously from a large number of animals.

My Microryza funding request is dedicated to purchasing EncounterNet automated tracking technology. I will supplement the Microryza support with funds from other sources to cover travel and other field expenses. Much of the necessary equipment and supplies are in-hand and stored at my field site in Monteverde, Costa Rica.

I own 15 tags for larger birds and 15 base stations purchased on a previous Waitt Foundation/National Geographic grant; this equipment will also be deployed for the study.

In summer 2012 I deployed an EncNet system in Monteverde, Costa Rica. I moved 10 base stations among army ant colonies. I radio-tagged 13 birds of six raid-attending subject bird species. I obtained behavioral data from 12 radio tagged subjects (92% of deployed tags). The 1.3 g tags broadcast every 5 sec and lasted a mean of 12 days; future deployments will extend tag life by decreasing pulse rate. EncNet showed birds of the same and different species overlapped at army ant raids within days, and birds moved among ant colonies across days. The 2012 study showed the technology is feasible, but the 2012 system was not designed to test the details of bird interactions. 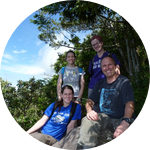 I am dedicated to sharing the results of my tropical biology research with the general public. I have extensive experience as a field consultant and on-camera expert with natural history documentaries. I contributed to the development and field filming of a major National Geographic special (Great Migrations, 2008). I appeared on-camera in productions by US, British, and Canadian film companies: Antzilla (2010), Patrick Stewart's Animal Superpowers (2011), and Wild Things with Dominic Monaghan (2011). The programs I worked on have garnered several awards, including: 2011 Emmy award for best cinematography, 2011 Montana International Wildlife Film Festival special jury award for best series, 2011 International Wildlife Film Festival best scientific content, and 2011 Japan Wildlife Film Festival's Award for Best Technical Achievement.

I believe the combination of deploying cutting-edge automated technology in the field with an iconic tropical interaction- birds and army ants- can be a powerful way of exposing a broad audience to tropical biology and generating excitement and curiosity.

I work in a globally important, but threatened, network of private and government reserves in Costa Rica: the Tilaran mountain range near Monteverde. Learning more about the fascinating interactions among the animals that range across these mountains, and maintaining a strong field research presence, can contribute to appreciation and long-term conservation of forests in the area. Finally, from a conservation standpoint, the study system is ecologically important to forest function and biodiversity. My work shows army ants are abundant top predators and their massive swarm raids affect populations of many small organisms in tropical forests. Behavioral linkages among ant-following birds are relevant to their ecological success.