While mercury is naturally available in the environment, human activities have increased the amount of available mercury, and this has been reflected in the high levels of mercury in shark and ray tissues. However, little is known about how mercury distribution within animals’ tissues changes with age. Using round stingrays, this project will examine how mercury accumulates in different tissues and investigate how their physiology changes with exposure and age.

Mercury concentrations in the earth’s atmosphere have significantly increased with human activities such as mining and fossil fuel burning. Mercury can be transformed into its more dangerous form (methylmercury) and this form is what becomes concentrated in animals’ tissues. For animals that occupy higher positions in the food web such as elasmobranchs (sharks and rays), mercury can bioaccumulate to high levels due to their long life and carnivorous behavior. Mercury is well known to accumulate in the muscle of sharks. However, the distribution of this contaminant within different tissues and how mercury fluxes from one part of the body to another with age is poorly understood in elasmobranchs, especially for rays and skates as most attention has been directed towards sharks.

Previous studies on sharks have started to examine the interplay between mercury that is accumulated in muscle and liver. However, the dynamic that exists between these two tissue types is still not well understood. The liver plays a detoxification role in the body while the muscle potentially represents a mercury reservoir. Therefore, mercury accumulation will be dependent on the dynamics of mercury distribution in the body between these two major tissues. Investigating how mercury concentrations change in each of these compartments (i.e. liver and muscle) with age is important for understanding what negative physiological impacts mercury exposure may be having in elasmobranchs. Mercury accumulation and distribution has implications for human health when elasmobranchs are consumed.

Using analytical chemistry, we plan to measure mercury concentrations in the liver and muscle of round stingrays from juveniles to adults. In addition, we will also quantify the trace metal selenium, which is thought to have a protective effect against mercury exposure. Since the liver is the main detoxifying organ of the body, we will also be using a specific assay to determine the liver’s ability to detoxify mercury, and measure its ability to protect itself from mercury exposure. We will take these measurements for stingrays over a range of sizes to examine how mercury distributions change with age. In addition, we will use several markers (i.e. selenium concentrations and an important liver enzyme) to determine the ability of stingrays to cope with mercury exposure.

Funds will be used to cover heavy metal analysis (including mercury), which is the most expensive component of the project. Metal analysis can be costly due to the labor, equipment, and reagents needed to analyze samples. Tissue samples have already been obtained so costs for field work etc are not required and all funds raised for this project can go directly to analysis. Analyzing mercury and the other heavy metals found in tissues is most important for understanding how mercury distributes itself throughout animals’ bodies.

A small portion of the funds will be used to cover the cost of the liver glutathione-s-transferase activity assay kit. This is an important part of the project because we will use this to determine the stingrays’ ability to detoxify mercury, and thus, protect their livers from the potential negative impacts of exposure.

This is an important and timely study, and Kady is well qualified to carry it out. As more commercial fisheries continue to fish down trophic levels, fish such as rays are increasingly entering the human food chain. So not only is the information of direct concern to us, but the knowledge gained can also be applied to modeling uptake of heavy metals in other fish species that are fisheries targets, and gives insight to the wider impacts of heavy metal pollution in fish populations beyond direct human interest. 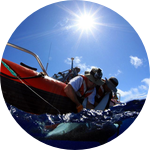 James Anderson
PhD candidate and research assistant
University of Hawaii & Hawaii Institute of Marine Biology
Mercury is well known to accumulate in the tissues of predators, yet the dynamics of this contaminant in elasmobranchs remains poorly understood. This exciting study will address this problem by investigating how mercury moves through the different tissues of elasmobranchs, which has important implications for their health and reproduction. As Kady is a pioneer in this field, I have no doubt that this project will be successful and provide great insight into the dynamics of contaminants in elasmobranchs and their physiological effects. 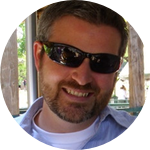 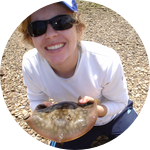 Ever since my parents took me to local aquariums as a toddler, I have been interested in marine biology. However, unlike most children who “want to study ocean animals when they grow up” and then lose this particular interest, I have kept my passion for marine science. I find the crossroads between ecology and physiology and the ability of animals to cope with a changing environment fascinating.