Toxicants of human origin are a growing concern to conservation. Lead (Pb) is a toxicant that accumulates in the body over time. It has no biological function and can cause many negative health effects over time. The World Health Organization (WHO) states that there are no safe levels of lead in the body.

The brown bear is exposed to lead through scavenging. We will investigate the impact of lead on the health of wild brown bears and identify predictable blood changes (biomarkers) of toxicity.

Lead (Pb) is a toxicant that accumulates in the body with no biological function. It is absorbed through the gut wall in the intestines and cirkulated throughout the body in the blood. It is stored in the bone and once it is in the bone, lead will remain in the body for decades. There are no safe levels of lead. Lead use is not regulated in ammunition, where hunting ammunition likely plays a major role in the exposure of lead in wildlife.

The brown bear is a scavenger, making it susceptible to lead exposure from hunting discards. Lead ammunition fragments and a proportion of the bullet is found in the body of the shot animal around the bullet wound in a radius of up to 45 cm. As damaged meat along with the gut, are left behind in the forest, lead fragments are eaten by the scavengers.

Scandinavian brown bears have recently been found to have high blood lead levels. The health impact on the bears have not yet been studied. We know in many species, including humans, that chronic lead exposure can affect the health. In the bear the effects may be particularly important due to its unique hibernating period. Metabolomics analysis could identify effect of lead exposure as well as identify biomarkers of toxicity in the bears.

Once lead toxicity in bears is better understood, the implications of lead ammunition use can be more accurately determined. This information can be used to convince law makers of the negative effects of lead ammunition on bears, on the whole ecosystem, and on humans eating meat shot with lead bullets.

We hypothesize that lead exposure causes adverse effects in the brown bear and that biomarkers of the exposure can be identified using metabolomics.

The goal of our project is to do a metabolomic analysis of the brown bear and identify possible lead toxicity and biomarkers of toxicity. This is accomplished by measuring metabolites that are produced in the cells of the body that are affected by the lead toxicity. The biomarkers could then be used to assess the health status of brown bears living in areas with high degree of hunting activities, as well as aid in research investigating other species and/or toxicants.

The funding will be used to support a Master's project at Inland Norway
University of Applied Sciences with hand-in in April 2020.

We seek funding for the laboratory metabolomics analysis . The project will be using blood serum samples from a biobank, samples which have been collected at captures conducted as part of ongoing studies at the Scandinavian Brown Bear Research Project. The analysis will measure all metabolites in the sample, which are components of all cell processes. If lead exposure affects the bear, it should be possible to see it in the metabolites, as well as identify what blood changes, or markers, show exposure to lead.

Additional funding past the goal will enable us to increase the sample size and thereby add more bears to the screening of toxicity of lead exposure.

This is an exciting project looking at the physiological effects of lead exposure in brown bears. Amanda is highly motivated to contribute to wildlife health. Amanda applies a novel and modern approach to a long-existing problem (lead contamination). Amanda did her thesis for the veterinary degree on surveillance for lead exposure in brown bears, and now, for her masters in applied ecology, she aims to take her work to the next level and look at the consequences of the lead exposure that she has already documented by applying metabolomics. 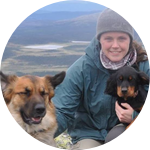 The project has a final submission deadline in April 2020. Sample collection from the biobank will happen over the Summer 2019 which includes data extraction from the captures as well as selecting which groups to include in the study. The samples will then be analysed at the laboratory in Autumn 2019 and immediately after be analysed statistically. Writing of the thesis will be ongoing throughout the period. 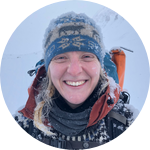 I am a wildlife veterinarian doing a Master's in Applied Ecology with a special interest in environmental toxicology. My MSc thesis in Veterinary Medicine focused on measuring lead (Pb) in Scandinavian brown bears in the Scandinavian Brown Bear Research Project, and for my Applied Ecology thesis I wanted to further explore the effects of this exposure in the bears. I have been fortunate to work with amazing researcher in Scandinavia, who have guided me towards a future combining the interests of chemistry, statistics and veterinary medicine and I look very much forward to working on this project.

Lead exposure in humans is termed the "silent killer" leading to many adverse health effects including neurotoxicity and cardiovascular disease. Lead is transferred through the milk to the nursing child, posing a higher risk in women. Children or growing individuals have more adverse effects of lead exposure as they also have a higher absorption of lead in the gut as well as a growing brain that is more sensitive to neurotoxic compounds. Bears are hunted and eaten, posing an exposure risk to humans as well from ingesting lead bullet fragments from other game meat.