We are leading an expedition to the Late Cretaceous Almond Formation of Southwestern Wyoming. Our goal is to find and collect scientifically significant dinosaur specimens. The Almond Formation is about 72 million years old. Well preserved Dinosaurs from this slice of time are, with a few exceptions, almost unheard of from the state of Wyoming. There is a high likelihood, therefore, that whatever dinosaurs are found will represent never before seen species.

Many paleontologists are fascinated by the Late Campanian-Early Maastrichtian stages of the Cretaceous due to its high level of faunal diversity. While looking for understudied dinosaur bearing rocks from this slice of time I stumbled upon Dr. Andrew Farke's papers (Farke, 2004 and Gates and Farke, 2009) about the dinosaurs collected from there in the 1930s. The first and only Almond dinos were found by Barnum Brown (histories' greatest dino-digger). He collected several dinosaurs there, including a Saurolophus and a well preserved, though incomplete ceratopsid skull. Because the frill bones are missing from the skull its identity remains unknown and it may be a new genus as Brown thought back in 1937.

70 million years ago North America was divided into two pieces by an inland seaway. The Almond Formation was deposited on the edge of this sea. It was on a narrow strip of floodplains that generation after generation of snaggle-toothed tyrannosaur, horned ceratopsian, and snooting hadrosaur lived out their lives hunting, killing, raising babies, evolving, and going extinct. While many Wyoming dinosaurs are known from the very end of the cretaceous (66 million years ago), only a handful of fossils are known from the older rocks of the late Campanian to early Maastrichtian stages (~73-70 million years ago) from the state. The Almond formation is therefore a paleontological frontier. Almost every vertebrate fossil we find can be considered significant.

The goals of this project are to collect every single taxonomically diagnostic vertebrate fossil we find from the Almond Formation. From there we will prepare them at the Cincinnati Museum Center and describe the material in the scientific literature. We hope to find additional material of the Almond ceratopsid, especially the parietal and squamosal bones that comprise the frill which are very diagnostic. Finding any generically diagnostic dinosaur remains will help to understand the extent of faunal provincialism in Western North America at the time and the potential geographic boundaries separating the supposed northern and southern faunal provinces.

While the study of dinosaurs has advanced with the pace of technology, the process of finding and excavating them remains gloriously primitive! It is only a matter of walking around, finding fragments on the surface and digging out what lies buried with hand tools. In order to maximize the probabilities of success, though, you need many eyes on the ground. Eyes are attached to bodies and bodies need food! We will have a team that varies between 3 and 12 individuals that will need caloric fuel to harness their dinosaur hunting powers. Dinosaur bones are often fragile and need to be consolidated in the field with a specific combination of glue forming chemicals (which are not cheap). We will also have to buy plaster of paris, burlap, and other miscellaneous excavation supplies. We will also have to pay for the gasoline we will burn driving for hundreds of miles there and back as well as between outcrops.

Ethan Cowgill has work with the UGS on several dinosaur excavations and has demonstrated considerable skill in dinosaur excavation and documentation. He has also proved capable in training and overseeing others. He has been eager to start his own project and the partnership he has developed with my colleague Dr. Glen Storres at the Cincinnati Museum of Natural History is a good pairing. Ethan is perfectly capable of undertaking this project and has the fire in his belly to put many miles under his boots in the quest for significant fossils. 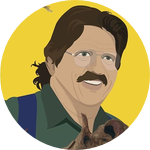 Our survey permit from the BLM will last from May to August of 2021. We will be beginning with an initial 12 day expedition from May 7-19. If we get fully funded we can finance additional 2-4 day long trips later in the Summer. 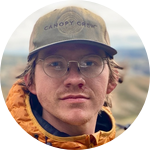 My team is composed of myself and volunteers who are mostly early career researchers such as recent geology graduates, dedicated undergraduates, and well-established paleontologists who have a stellar field record.

I am a paleontology student studying cretaceous dinosaurs and crocodylomorphs. I have been digging dinosaurs since I was 13 and have since collected vertebrate fossils with various institutions from Montana to Texas and everywhere in between. I am not just devoted to paleontology because it is fun to make discoveries and live in the wilderness but also because it has the potential to solve grand puzzles about evolution, climate change, and extinction.