We know that at La Milpa, the Maya built agricultural terraces. We don't know what they were growing there and why. What were the Maya growing in the city's public center? How do these crops relate to the rise and collapse of a city of 20,000 people by the end of AD900? To try to get to the bottom of this we will be excavating the terraces during the summer of 2017 and testing the surrounding soil for plant remains.

The rise and fall of the Maya is hypothesized to be the result of rapid population growth followed by the overexploitation of natural resources. In northwestern Belize and northeastern Guatemala, the population between AD700 and 780 was approximately 430,000 people. By the time of the Maya collapse by AD900 this city was mostly unpopulated.

The city of La Milpa is the third largest Maya site in Belize, is located in the Rio Bravo Conservation and Management Area in the northwestern part of the country, and was a dominant polity between AD650/700 and 780/850. Why La Milpa, a large regional center, disappeared by AD900 is unclear. One of the clues as to why the city declined may appear in the story of how it tried to feed its people.

Using a combination of archaeological excavations and paleoethnobotanical methodologies, the Programme for Belize Archaeological Project (PfBAP) will recover, identify, and analyze plant remains from the terraces surrounding Structure 3 at La Milpa. Structure 3 is the largest structure at the site and consists of a large ceremonial temple pyramid. The successful recovery and analysis of plant remains will allow us to reconstruct what crops were grown, when they were grown, and where they were grown in relation to the surrounding city. This research will not only tell what plants they may have been eating, but will also allow us to address larger issues such as population decline, food production, different functions of ritually-significant spaces, and ceremonial use of plants.

Phase one of the project will be to excavate the terrace structures surrounding Temple 3 during the summer of 2017. Six 2m x 2m units will be excavated to understand how and when these terraces were built, their sediment retaining capacity, and to retrieve soil samples. Soil samples will be taken back to the PfBAP camp where they will be processed using a dry screening system and a flotation tank to recover plant parts associated with ancient crops.

In Phase two of the project, the plant remains will be shipped back to the Center for Archaeological and Tropical Studies in Austin where they will be analyzed using compound microscopes. The results will be compared with previous studies of La Milpa in order to place them within the larger context of the rise and fall of the city.

The vehicle rental and gas budget provides transportation to and from the La Milpa excavation site to the Programme for Belize Archaeological Project research station. This allows us to transport equipment and people to the site every day. Three workmen from the nearby village of San Felipe will be hired. Their archaeological experience and knowledge will be invaluable for this project. Room and board is required to cover the cost of the stay for Thomas Hart and Debora Trein at the research station. Flights to and from Belize will be covered through separate funding provided by PfBAP

This team is using multiple, state-of-the-art botanical analyses. They will be the first to use these analyses on an important group of agricultural terraces right next to La Milpa. With 21 years of experience working around this area, I predict great success in answering key questions central to this important Maya city and its broader culture. 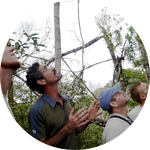 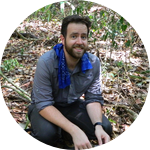 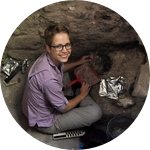 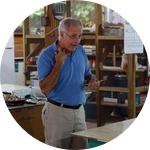 Thomas C. Hart is the Director of Paleoethnobotanical Research for the Programme for Belize Archaeological Project and a Visiting Assistant Professor in the Anthropology Department at Franklin and Marshall College. Hart has run botanical analyses for excavations ranging from colonial era settlements in North America to 6,000-year-old villages in northern Mesopotamia and has published on ancient plant use in peer-reviewed journals such as the Journal of Archaeological Science and Ethnobiology Letters.

Debora Trein is a Postdoctoral Fellow at the Center for Archaeological and Tropical Research at the University of Texas at Austin. Trein has led excavations at La Milpa’s center for eight years, although she has also conducted archaeological investigations elsewhere in Belize, as well as Guatemala, the US, and the UK. Trein has published numerous reports on her work at La Milpa, and had also published articles in Research Reports in Belizean Archaeology.

Fred Valdez is a Professor of Anthropology/Archaeology at the University of Texas at Austin. As a Mesoamerican archaeologist, Valdez’ primary interests are in Maya Civilization. In Belize he directs the Programme for Belize Archaeological Project and in Austin serves as Director of the Center for Archaeological and Tropical Studies.