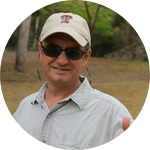 About
Brett A. Houk, the Project Director, has over 20 seasons of experience in northwestern Belize and is the permit holder for the Chan Chich Archaeological Project and the Belize Estates Archaeological Survey Team. Houk has published in peer-reviewed journals on the archaeology of northwestern Belize and is the author of a book in press with University Press of Florida entitled Ancient Maya Cities of the Eastern Lowlands, which will be published in April 2015. He was part of the team that re-located the Maya village of Kaxil Uinic in 2012 and the British logging camp of Qualm Hill in 2015. He has published and presented papers on the topic
of colonial sites in western Belize.
Joined

By Brett A. Houk

By Brett A. Houk

City Growth and Trade at the Ancient Maya Site of Alabama in Belize.

Hi, everyone! We happily announce the publication of The 2015 Season of the Chan Chich Archaeological Project. The report includes chapters on the work at Kaxil Uinic village and Qualm Hill camp, w...

Some Preliminary Results from Qualm Hill

With the first session field school in full swing, we have not found time for a lab note until now: minutes after the students departed for an overnight trip to Tikal. With only one more week in th...

With the field season only five weeks away, our preparations are underway for both the archival investigations and the field season. Dr. Houk, Brooke Bonorden, and Ashley Booher will travel to Beli...

Thank you, everyone, who made a contribution to our research. We just reached our goal, and you have no idea how much this will help us accomplish our mission this summer. All contributions of any ...

When last we left Major Luke Smyth O'Connor of the First West India Regiment, he and his small party had departed Qualm Hill in search of the Indios Bravos. The next part of his tale is a fascinati...

Calling on all the Five Dollah Girls Out There

Summer field schools often generate some of the best nicknames ever, ones that haunt their owners for the rest of their lives. From 2007 to 2011, my field school shared a camp in Belize with multip...

A private individual has generously offered to match any contributions equal to or larger than $50 between now and 9:00 pm CT on February 27, up to a total match of $1,000! This is a great chance t...

Something a little different for our supporters

For your viewing pleasure, we are posting a movie trailer that premiered last summer during Brett Houk's presentation at the Belize Archaeology and Anthropology Symposium. Group H is part of the si...