Plants convert sunlight into energy and initiate symbiotic partnerships with fungi through their roots. In these symbioses, plant-derived carbon (C) is traded with fungi for water and nutrients. I plan to investigate exactly how C flows through belowground fungal networks in a grassland prairie plot. Determining the fate of C is important in understanding plant-fungal trade systems, but perhaps more so in specifying the relationship between soil fungal C and climate change mitigation.

Belowground carbon (C) is typically poorly understood, and the fate of new carbon and the organisms it is distributed to are almost always unknown. As environmental change factors such as atmospheric CO2 concentration and global nitrogen deposition continue to increase, determining how C-flow dynamics change in response will be critical to predict how ecosystems will function in the future. The close relationship between plants and their symbiotic microbes is regulated by the exchange of various goods and services. Plants tend to allocate more C to fungi that transfer the most nitrogen or phosphorus. Reciprocally, fungi will give the most nutrients to plants that release the most C. My research will help us better understand the changes in these trade relationships by tracking C in soils.

Tallgrass prairies are one of the most threatened ecosystems on Earth. In the US, they occupy less than 1% of their original land area. Grasslands may have the potential to store huge amounts of carbon (C) belowground in their expansive root systems, but the role of symbiotic fungi in C storage is largely unknown. This project will experimentally track C from individual plants, through their roots, and then into fungal partners in soil. This C found within the plant-associated fungi will be quantified and the fungal species that incorporated the C will be identified. This will help us understand how much C is being transferred to fungi and to which taxa. The results could be used to predict C storage benefits of native prairies, and might help push future restoration efforts.

This project will begin prior to the peak of the growing season for prairies (mid-summer) in 2017. It will take place at an experimental prairie plot in the midwest, which has been ongoing for ~10 years. I will initiate 13-CO2 pulse-labelling across two experimental treatments at this site; plots are made up of three different cultivars of a prairie grass, Panicum virgatum, and are either unfertilized or fertilized with nitrogen (N). Pulse-labelling is a technique where 'heavy' isotopic carbon (13-C), rather than the normal and 'lighter' 12-C is forced into the plant as atmospheric 13-CO2 (see 'Methods'). I will then track the flow of 13-C considering both time and distance from the plant roots to determine how quickly and how far the new C moves to and through fungi.

While I have funding through a USDA grant to look at the fungal community structure and function at this site, were are currently unable to address the fate of carbon (C).

This project would require additional travel to my field plots located at Fermilab in Batavia, IL, and more importantly, 13C 'heavy' carbon labelling of plants in existing research plots. This would be gaseous CO2 labelled with a signature 13C that is taken up by target plants and subsequently tracked through the soil system via soil/root sampling that will consider spatial patterns around the roots. These soil and root samples would then be analyzed using molecular methods that partition the different 12C and 13C DNA fractions and therefore target only the DNA that has incorporated the labelled 13C. These fungal DNA fractions will be quantified and then sequenced to determine the exact fungal communities that have taken up the C, focusing on both time and distance of C-flow.

I am a PhD student at Northern Arizona University, I currently study soil ecology with Dan. Belowground carbon in fungi is a significant and underexplored component of climate change research. Dan's project is an economical and valuable approach to filling important gaps in our knowledge about the fate of carbon within belowground symbiotic relationships. 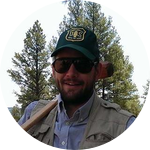 Bo Stevens
PhD Student
Northern Arizona University
I am writing to express my strong support of Daniel Revillini’s research proposal. As Dan’s advisor, I can say with confidence that he is making excellent progress in his Ph.D program. Dan has shown great initiative and independence in his ability to gather and analyze information and carry forward some novel concepts for his dissertation research. He recently published a well-received paper in Functional Ecology, titled ‘The role of locally adapted mycorrhizas and rhizobacteria in plant-soil feedback systems’. 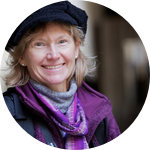 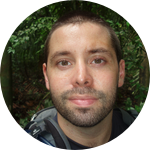 I'm currently a Ph.D. candidate at Northern Arizona University in the Department of Biological Sciences. My focus is broadly soil ecology, and I have experience working in temperate rainforests, seasonally dry tropical forests, and now grasslands of the midwestern US. My previous Ph.D. work was based in Minnesota at a long-term environmental change experiment (BioCON) to determine patterns in bacterial and mycorrhizal fungal communities under elevated CO2 and N fertilization.

I've always had an appreciation for nature, but not until I learned about common mycorrhizal networks as an undergraduate in Washington state did I truly understand how intricate and balanced an ecosystem can be. The idea that below our feet is an amazing unseen world that in many ways mimics our aboveground world is both amazing and bewildering.

Many questions in soil ecology have already been answered, but even more have not. That's where I come in. This research has taken me around the world, and I hope it continues to give me that opportunity in the future.