We are using baited remote underwater video (BRUV) to survey sharks, rays and skates ("elasmobranchs") on coral reefs throughout the tropics as part of the first global census of these species - one-quarter of which are threatened with extinction - to understand their role in the ecosystem and ultimately drive their conservation. The Global FinPrint Project will survey more than 400 coral reef sites in over 30 countries over the next 3 years.

Our team has obtained 3,000 BRUV data sets across 4 regions, providing incredible insights into the behavior and abundance of sharks. To truly understand their ecological roles and affect conservation at a global scale, a much larger project is needed. Each sampling site is critical to the effort, and we're looking to fund the equipment, boat rental and fuel to sample one critical coral reef site and obtain 100 BRUV deployments.

We'll use the survey data to model what factors drive reef elasmobranch density and diversity. Next, we'll identify global hotspots and highlight the differences between pristine and impacted sites for all habitat types. Finally, we'll test for correlations between density and community structure to assess the global ecological impacts of elasmobranchs.

Large shark species have faced 70-90% declines in the last few decades, due mainly to fishing and habitat loss. Recent estimates suggest that approximately 100 million sharks are killed every year. Populations of many species of rays haven't faired much better.

Humankind is poorly equipped to reverse these declines because we have a limited understanding of this ancient group of animals. We need to learn more about the status of reef shark populations and to understand how vital sharks are to the health of coral reefs, which provide important habitat to myriad species and incredible economic and social values to people.

Scientists have addressed these questions using a range of methods, Global FinPrint Project's method allows researchers to have the sharks catch themselves - on camera.

This project aims to consolidate our team's existing and newly collected BRUV data into a single analysis, producing the first globally standard survey of elasmobranch density and diversity over the world's continental and insular shelves, focusing on coral reef ecosystems.

We aim to quantify the major human pressures and environmental factors influencing shark and ray populations and to investigate their potentially critical role in coral reef ecosystems from ecological and economic standpoints, to ultimately inform and drive regional and global elasmobranch conservation efforts.

These analyses would enable us to predict density, diversity and species composition of unsampled areas on a regional, multiregional or global scale, depending on the number of regions included.

Each sampling site for BRUV deployment is critical to the effort, and here we're looking to fund the travel, equipment, boat rental and fuel to sample one coral reef site and obtain 100 BRUV deployment videos. Any funds received beyond the goal will be applied to supporting sampling at additional sites. 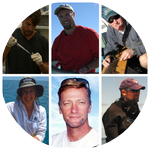 The Global FinPrint core research team consists of some of the world's top shark biologists and marine ecologists who provide the expertise and network of collaborators to ensure that the project meets its scientific and outreach goals.

The project lead, Dr. Demian Chapman (Stony Brook University) has more than ten years of leadership in shark conservation research with specific interests in genetic and survey work to inform improved conversation actions. Co-lead, Dr. Mike Hiethaus (Florida International University) specializes in predator-prey interactions and the ecological importance of sharks and other large marine species. He has published more than 120 papers, co-edited three books on sharks and attracted over $4 million in research support.

Collectively they lead a team of postdoctoral researchers, graduate students, and citizen scientists. The team will collaborate with local scientists in specific regions to help gather data, making it a true globally coordinated effort.