Crop pollination by migratory beekeeping operations presents a highly concentrated convergence of bees where diseases may be transmitted and spread as hives are transported throughout the US. To test if migratory operations contribute to the spread of disease, we propose an experiment where we subject hives to almond pollination in California and compare their disease loads to stationary hives in N. Carolina. Upon the return of the migratory hives, we will measure subsequent disease spread.

Each year, migratory beekeepers transport millions of hives across the country to pollinate our food crops. Perhaps most notably, every February, ~60% of US honey bee colonies are brought to California's almond orchards. Although important for the production of our food, this high density of hives during crop pollination could lead to increased disease transmission.

In the US, bees contribute about $14.6 billion in pollination services every year to important crops including blueberries, cranberries, apples and citrus. Pathogens pose a significant threat to both native and managed pollinators. Understanding and reducing disease transmission among bees is a both a conservation and economic priority.

Results could directly influence management strategies proposed in state Managed Pollinator Protection Plans as part of the 2015 National Strategy to Promote the Health of Honey Bees and Other Pollinators. Apiary inspection programs help lessen the risk of disease to pollinators but are often underfunded. Our results could provide the evidence needed to increase funding to these important programs to ensure adequate inspections.

In February 2017, we will simulate migratory conditions by trucking North Carolina hives to California for almond pollination, then returning them, where they will reside with a control group of stationary hives. We will test both groups for pathogens and colony strength (brood, weight, pollen stores) before and after the migration. To test for disease spread from the migratory hives to their stationary counterparts, we will test both groups one month later. We will compare disease loads of the exposed stationary hives to an isolated control group of hives.

Results of this study will be published in both scientific and beekeeping journals. We will present findings for beekeeping organizations and at the 2018 American Beekeeping Federation Conference.

In order to conduct this experiment, we will need funding for bees and beekeeper time. Samples will be collected and stored in ethanol (for mite and nosema testing) and on dry ice (to preserve specimen for RNA virus testing). Samples will be shipped overnight from North Carolina to the University of Vermont to ensure their preservation during transit. For all disease assays, we will be using the established protocols we already use in our lab. To conduct viral assays, we will need RNA extraction and PCR kits. Other miscellaneous lab supplies include pipette tips, glass slides, 96 well plates, vials, and gloves.

Since this is a crowd funded project, we would like to submit the resulting paper for publication in an Open Source Journal for all to read! Since Open Source Journals are free and available for anyone, they tend to be a little more expensive than traditional journals. An additional $1,216 would cover the cost of publication and all associated fees.

As a 40 year, non-migratory commercial beekeeper and queen breeder in the Champlain valley of Vermont and New York, I have seen increased disease load in my bees when migratory operations have located near one of my apiaries. I am excited that Samantha might be able to shed some light on what I am seeing. I wholeheartedly endorse her work as I believe she is the right person formthem job. 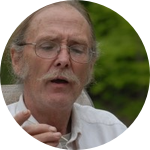 Michael Palmer
Commercial beekeeper, queen breeder, and lecturer
Unafilliated
As the Vermont State Apiary Inspector, I have received many questions on the impact of migratory beekeeping on honey bees, nucleus colony quality, and Vermont pollinators. This project can provide us with a solid piece of the pollinator puzzle that is otherwise impossible to see. I am confident in the ability of this team, having worked with each of these scientists in either the lab, the apiary, or the Statehouse. We need the type of science this project would provide to plan our next steps in protecting our pollinators. 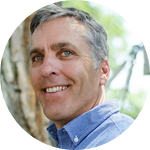 David Tremblay
Vermont Apiary Inspector
Vermont Agency of Agriculture, Food and Markets
All praise to bees. Without them the world would be a very different place: from forest to field an empty world, and also empty shelves in the supermarket. All respect to the pathogens: they control the world, including the bees. This project therefore goes right to an extremely, extremely important issue. But, very ambitious! How can such an expansive project be completed? The answer is the team: I know a few of these researchers, and they are the very best, real stars in bee ecology. They will do everything promised, and do it perfectly 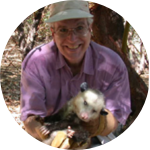 All samples are processed for viruses, mites, and nosema!

All data are entered and analyzed!

Paper has been submitted for publication!

Paper has made it past first round of reviewers!

Revisions made and paper resubmitted! 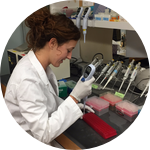 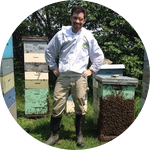 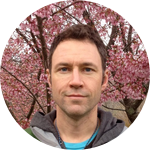 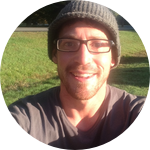 I am a PhD candidate and NSF graduate research fellow at the University of Vermont. The goal of my research is to examine the prevalence, means of transmission, and effects of RNA viruses on bumble bees. I also lead Vermont’s involvement in the National Honey Bee Survey, a comprehensive survey of honey bee pathogens and parasites throughout apiaries in the United States.

I am a PhD student at the University of Vermont in the Department of Biology. My work focuses on experimental and mathematical model-based approaches to examine disease prevalence, interactions and co-infection using bumblebees as a model organism. In addition, I am a sample collector for the National Honeybee Survey in the state of Vermont.

I am a USDA National Institute of Food and Agriculture postdoctoral research fellow at the Gund Institute for Ecological Economics at the University of Vermont, where I study how mycorrhizal mutualisms between blueberry plants and fungi affect attractiveness of flowers to the bees that pollinate them. During graduate work, I discovered that chemicals naturally present in flower nectar and pollen can reduce bee parasite infection, and I have been thinking about bee disease ever since. I also contribute to efforts that address declines of bees and other pollinators, which includes serving on Vermont's Pollinator Protection Committee. I am co-author of Bumble Bees of North America: An Identification Guide.

I am a PhD student at the University of Maryland in Dennis VanEnglesdorp's lab. I am also a commercial beekeeper and owner of Sun Hill Farm. I overwinter hives in New England and on the coast of North Carolina where I produce queens and nucleus colonies for both commercial and hobbyist beekeepers.