Northern Costa Rica, once a vast swath of lowland rainforest, has seen large-scale habitat disruption in recent years. Fortunately, the riparian habitat along the Río Frío remains relatively intact, and preliminary camera trap surveys have demonstrated the presence of large terrestrial keystone species including jaguar and Baird's tapir. This in-depth camera trap survey aims to demonstrate the importance of this threatened rainforest habitat as a biological corridor.

The flooded forest habitat surrounding the Río Frío is very unique for Costa Rica, and it holds an abundant yet threatened number of large terrestrial keystone species like jaguar (Panthera onca), puma (Puma concolor), Baird's tapir (Tapirus bairdii) and white-tailed deer (Odocoileus virginianus). Unfortunately, the area sees limited attention from the scientific community. This project aims to demonstrate the importance of protecting the remaining habitat and will hopefully call the attention of the scientific community to collaborate on future investigation.

The presence of large terrestrial keystone species demonstrates the relative health of this rainforest environment. That said, large-scale habitat loss, agricultural development, and pollution threatens the area. By using data collected from our survey we hope to show the importance of working with the local community, the scientific community, and the Costa Rican government to protect this region from further development.

In order to demonstrate the importance of protecting this unique habitat, we will set a total of 15 camera traps throughout a roughly 50 KM section of river in order to better understand population dynamics as well as how resident and migratory wildlife uses the river as a corridor. We will perform the survey during the rainy season, when the river floods much of the area and wildlife is more concentrated in key higher elevation sites. By capturing video evidence of these large terrestrial keystone species, we aim to engage with various stakeholder groups to collaborate on a unified conservation effort as well as continued surveys in the area.

We currently have 3 remote camera traps in use to collect data. With the addition of 12 more we will be able to strategically distribute cameras throughout the study site (along roughly 50 KM of river). Additional items (portable hard drive and waterproof computer case) will make data collection in the field easier/safer in this extremely wet rainforest environment. And finally, gas/time to operate the boats needed to reach all cameras for a total of 10 data collection trips @ $50 each (including the initial set up of the camera trap system and the final removal of all cameras after study period).

This project will bring the necessary information about a highly important area for the conservation of keystone species in one of the most important corridors between Costa Rica and Nicaragua. Counting on an ecological base line information of the species and ecosystem of the area, conservation actions will be more accurate and effective. 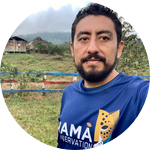 August to December 2021. This time coincides with the rainy season, and the area surrounding the study site turns into a vast flooded delta. This concentrates wildlife along high points bordering the Río Frío and will help generate solid data throughout the study period of how the riparian habitat is used by resident and migratory wildlife. 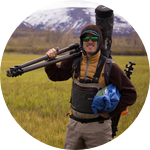 We work with a number of local captains on a community-based tourism project. These captains will help us placing and checking cameras throughout the study period. Their intimate knowledge of the habitat will help ensure great results, and their engagement will foster a sense of environmental stewardship.

Tom is the owner/head guide of boutique tourism outfitter Release Fly Travel as well as the founder of a small non-profit called Associación Conservación Bosque del Sábalo. His fly fishing program, the Jungle Tarpon Reserve, provides economic support and training to the local community in the study site. Tom is passionate about generating awareness, fostering environmental stewardship, and encouraging collaborative conservation project by sharing findings from studies like this one with the local and scientific communities.

We operated camera traps during the same period (August-December) in 2018 and 2019, and captured a huge diversity of wildlife. Most notably, we monitored a female jaguar (we named Luz) over the course of 2 years, and in November 2019 we photographed this individual with 2 young cubs. Other cats documented include ocelot (various individuals as well as a female with young on several occasions) and puma (various individuals). We also have many documented Baird's tapir, white-tailed deer, tamandua (Tamandua tetradactyla), tayra (Eira barbara), raccoon (Procyon sp.), armadillo (Cingulata), as well as a myriad of smaller mammals, reptiles, and birds. See our video for some examples of our findings. Unfortunately, we were unable to perform any camera trap work in 2020 due to COVID-19.