Sharks use solutes, such as urea, to prevent cellular water loss. While the mechanisms of urea retention are well studied, no studies have accessed urea loss in the field or across multiple species. This study will provide insight into how sharks moderate water loss by collecting non-invasive urea samples from the shark gill interface. This project will allow us to determine urea concentrations at the surface of shark gills and to better understand how sharks use urea to control water loss.

Urea is a critical component in a shark’s ability to osmoregulate or maintain an internal balance between water and solutes in their tissues. While the synthesis and retention of urea in shark blood and tissues has been well studied, little is known about urea loss, especially through shark gills and skin. In laboratory studies of the model organism Squalus acanthias (the Spiny Dogfish), urea loss has been observed at the gill surface yet no studies have assessed urea loss in the field or across multiple species. During routine shark tagging, we often observe potent urea smells. We believe that by collecting swabs from shark gills and using a urea assay, we will be able to observe similar urea loss in the field and expand upon current laboratory findings.

Understanding osmoregulatory dynamics in sharks is important for understanding both shark physiology and how different species of sharks differentially function in marine environments. This project will be the first to assess urea loss and concentration at the gill interface in the field and across multiple species of sharks. Findings from this study will broaden our understanding of shark physiology and will provide tremendous insight into osmoregulatory dynamics of Atlantic and Caribbean sharks. As we learn more about how sharks function in their environment, we will better be able to advocate for effective conservation and management efforts.

Our goal of this study is to assess urea concentrations at the gill interface of sharks caught during routine shark tagging with the eventual goal of better understanding shark osmoregulation and the variation of urea osmoregulatory dynamics across species. Our samples will be collected in South Florida, off the coast of Miami and we aim to sample at least four species of sharks including, but not limited to, blacknose (Carcharhinus acronotus), lemon (Negaprion brevirostris), nurse (Ginglymostoma cirratum), and blacktip sharks (Carcharhinus limbatus). The specific number of sharks sampled depends on what is caught during routine shark tagging trips. Such an array of species will allow us to better understand shark osmoregulatory dynamics in South Florida.

While the research infrastructure needed for acquiring sample organisms in the field is already in place, the funds provided will be instrumental in allowing us to add this additional urea assessment to our routine shark workups. The funds will be used to acquire equipment relevant to this new physiological assessment including field swabs which we will use to take the urea samples on the boat, assay chemicals which we will use to process the urea samples in the lab, and a microplate reader which will allow us to use the processed samples to assess the urea concentration at the shark-gill interface.

This project will add important data to our understanding of how capture stress affects osmoregulation and physiology across shark species. Emily's combination of lab and field experience make her the perfect person to undertake this project! 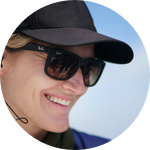 This proposed project will take place over the next 18 months with the majority of samples being collected during the 2023 field season. We will aim to collect all of our initial samples by August 2023 and to process and analyze the samples by December 2023. Once the infrastructure for this analysis is established, it has the potential to possibly be extended into subsequent field seasons.

Collection of all samples 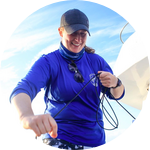 I've been fascinated by the ocean and the world hiding just beneath its waves for as long as I can remember. Now, as a graduate student at the University of Miami, I'm proud to spend my time researching the marine world, its organisms, and its ecosystems. I have a background in Biology and Environmental Studies and have completed research spanning a wide array of topics including marine microbial nutrient cycling and Prochlorococcus, plankton densities in Lake Baikal, coral reef ecology and coral-algal symbiosis, and migrating bird and turtle populations. I have been working with Field School for the last year and am excited to undertake this new project to better understand shark physiology and osmoregulation in South Florida.