Imagine being able to edit any gene—from Alzheimer's and cancer to eye color and balding. Today, that is almost possible, with gene scissors: we simply cut out the original gene, then paste the new one.
The Problem: We can cut genes, but only hope they get pasted.
The Solution: Gene glue for gene scissors.

Gene scissors, otherwise known as engineered nucleases, are used to cut custom genes of interest (GOI). However, they rely upon natural DNA repair mechanisms to paste in the genes. This can produce any one of three results:

Gene scissors were based on restriction enzymes. Gene glue will be based on ligases.

We will be able to efficiently edit any gene.

Broadly speaking, we will create the first gene glue—formally referred to as a site-specific ligase.

Editing any gene sounds rather broad, but the possibilities are boundless. Given the ability to edit any gene, here's just a small list of the things we could do:

Each of the items in the budget is one experiment necessary to verify that ligases work. Assuming they do, it is key that we move this technology forward as quickly as possible: there are lives we can save. 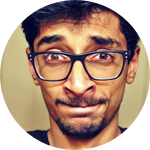 I've been obsessed with gene/genome editing since I watched the movie GATTACA in my high school biology class. I've been raised to be an indie scientist: the first lab I was hosted in researched ocean cyanobacteria...while I did my work on zinc finger nucleases in a little fume hood in the far back of the lab. This time, I've got 4-5 different labs (with potential advisors/mentors) offering to host me, on the condition that I find funding so I turned to Experiment.com.

When I'm not craning into a hood or a laptop, I'm working on the other things I like to do: I'm a graphic designer, singer/songwriter, occasional distance-runner, science communication reform advocate and dinosaur rights activist (just kidding).

The thing I love the most is working on my website/blog, Draw Science; I take science articles from big journals, and turn them into infographics so the public get's to see real research.

1 Lab Notes Posted
Back to the drawing board.