Plant fossils provide a record of the terrestrial ecosystem for the past 400 million years, but we do not fully understand the biases that are introduced during their formation. This project will explore how different groups of plants (e.g. flowering plants, conifers, Ginkgo, and ferns) decay. Knowing decay rates of different groups will allow us to better understand the fossil record and reconstruct ancient ecosystems.

The fossils that paleontologists study are the remains of bygone organisms that survived to become a fossil - a very small proportion of the actual ancient ecosystem. We base our understanding of past life and ecology on these fossils, but to be confident with those reconstructions, we must understand how these samples are biased. Taphonomy – the study of how fossils form – focuses on processes that may alter the assemblage and affect our ability to interpret the past.

The science of plant taphonomy has focused primarily on pre-burial processes - the effects of habitat, transport, and sinking. For example, leaves at the tops of trees are more likely to be transported by wind to a river or lake, where fossils form. However, post-burial processes, such as decay, remain relatively unexplored.

The role of decay in the formation of animal fossils has been well documented, but plants are made out of very different chemical components. The details of their decay are poorly understood and we don’t know how this affects which plants do or do not survive to be fossilized. In addition, structures and chemistries vary between plant groups, which may affect their chances of being preserved.

Fossil leaves of different groups, for example ferns and Ginkgo, often look very different even when they are preserved in the same rocks. The reason for this phenomenon is not understood, and may be controlled by the plants themselves! If certain plant groups decay away much more quickly than others, then our views of plant diversity through time may be biased - and my goal is to figure this out!

This funding would support the decay experiments themselves. I will be comparing the decay rates of 20 different species of 4 major groups of plants (flowering plants, conifers, Ginkgo, and ferns). Leaves from each group will be selected from plants in the Yale Marsh Botanic Gardens and decayed in a controlled environment for up to one year, with sampling taking place at 6 different time steps. The focus of these experiments is morphology - how do the leaves change over time? Do they lose important characters that help to identify them? Do certain species decay away entirely while others remain identifiable? The results of the experiments will be compared to fossil plants - giving us insight into the time frame in which plant fossils must form to preserve important morphology.

My experiments will be conducted in a environmental chamber that controls temperature and humidity. Glassware is critical for the experiments - plastics contain chemicals that may compromise future chemical analyses. Deep glass petri dishes are the ideal vessel, and our laboratory does not currently possess dishes of the right size or depth. I will be decaying a total of 240 leaves (20 species, 6 time steps, 2 leaves per time step).

Once I remove the leaves from the decay environment, I will examine them using light- and scanning electron microscopy to identify important changes to the leaf that occur during decay. While my lab possesses a light microscope that I can freely access, my department charges students $35 per hour for use of the scanning electron microscope. I can thoroughly examine 3 leaves per hour - for a total of 80 hours. I have already won a small grant that will cover 40 of these hours. 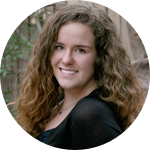 I am a Ph.D. student at Yale University, but my love of rocks began when I was a little girl. I began collecting them during my various (mis)adventures, and quickly accumulated a large pile to the dismay of my poor mother. I now collect rocks on a regular basis - its great to be a geologist!

My doctoral research focuses on taphonomy, the study of fossilization processes, in relation to the formation of plant fossils. Most of my work has focused on the fossils themselves. I use a variety of different techniques to collect data, which I use to piece together how the fossils formed. In addition to working on plant fossils, I have studied the fossilization of crabs and how color can be preserved in the fossil record.

When I'm not working on my thesis, I can often be found at the Yale Peabody Museum, where I work in the invertebrate paleontology collections and teach a class on rocks and minerals to elementary school students.

When I was a little girl, I was fascinated by the by the Earth. I began collecting rocks, and would make up stories about how they formed and became part of my collection. Throughout middle and high school, my favorite courses were science courses, but I never had the opportunity to study geology. However, I still walked around with my head pointed downward, searching for new specimens for my rock collection.

Everything changed in college when I took my first geology course. The first lecture overviewed the various aspects of geology and paleontology we were to cover in the coming months, and my world was forever changed. In the first hour, I started to see the world in a whole new way. Fossils particularly captured my interest, and before I knew it, I was a geology major with a focus on paleontology.

I am now a Ph.D. candidate at Yale University working under the advisement of Dr. Derek Briggs. My primary interests lie in the field of taphonomy - the patterns and processes of fossilization, from the moment of death to discovery. I am working on a number of projects related to this field, including evaluating rates and patterns of disarticulation in Gecarcinid (land) crabs; examining the preservation of structural and pigment-based colors in insects; and elucidating major controls on the exceptional preservation of plants. My thesis is focused on this last topic – leaf preservation – and I am using integrative experimental and fossil based approaches to answer various questions within this field.

One of the tools I will be using to complete this experiment is the scanning electron microscope (SEM). An SEM allows me to examine a sample at high magnifications - up to one 1,000th of a millimeter! The ability to examine fossils in this manner is crucial in understanding processes of fossilization. Here, I've included some SEM images of fossil leaves from New Caledonia. The leaves preserve amazing details, including individual cells! Enjoy!


1. This is an image of the veins of a fossil leaf from New Caledonia. The large cells in the middle are the xylem - the cells responsible for water transfer. On the left, you can see the individual cells surrounding the xylem. The crystal-like mineral you see is an iron-oxide called Goethite.

2. In this image, you are inside the leaf, looking down into the stomata - one of the openings on a leaf that is responsible for the transfer of oxygen, carbon dioxide, and water into and out of the leaf. Like the vascular tissue, the cells have been replaced in Goethite.