I'm the editor of a special issue of The Open Renewable Energy Journal with the topic "lightning for energy and material uses." Your funding will help to publish new work on the practical uses of lightning. Many approaches are being explored now: from using electrical currents to promote biomass production, to using artificial ball lightning as the heat source for nuclear fusion, to harnessing the kinetic energy from lightning-water events.

I published a review article on lightning as a potential source for usable energy in Renewable Energy in 2011. The current project is designed to build interest in the possibility of novel uses for lightning phenomena, including as a source of electrical power. I've contacted 115+ researchers who might potentially contribute a paper, with about 15 positive responses. Research areas include: (1) lightning explosions in water as a possible source of power; (2) the transmissibility of plasmas on thin wires; (3) artificial ball lightning as a heat source for fusion reactions; and a few others. Obviously, these will still have to go through peer review. The publication date of the issue is slated for summer of 2015. The articles will be open access.

I don't need to remind people that climate instability based on greenhouse gases has the potential to destroy our civilization by disrupting weather patterns that will in turn disrupt agriculture, nor of the extreme events potentially associated with such a change. The news about global warming has been extant for thirty years. (Personally, I like the notion of planting 1.5 trillion trees each year as a 1:1 offset strategy, but that is the topic of another project, and the paper's already been submitted ...)

In the meantime, it would be lovely if there were new options for energy that doesn't add to the greenhouse gas load of the atmosphere. Energy from lightning certainly fits the bill. If this industry can demonstrate some success, there's no telling where it will lead.

You will be funding me as an editor to do the work to contact other researchers and act as a "scientific matchmaker," putting groups in contact with each other so that they may work together on projects related to the practical uses of lightning; and also: to do the work related to making sure that any articles submitted are in publishable form.

I'm an independent scientist. Your gift makes my work possible. Really! I can't thank you enough for your generosity and for taking the time to read about this project. Of course, I think harnessing lightning will be a splendid way to make progress in the world. 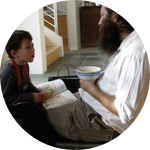 In addition to a BA from UCLA, the author holds an MS degree from California State University, Long Beach in Geology and a California teaching credential for adult schools. He is currently the executive director and a research scientist at the Winkle Institute, a 501(c)(3) nonprofit organization for independent scientists. He has taught courses for immigrants and for adults with disabilities, as well as university geology classes, and substitute teaching experience in primary and secondary grades (plus yoga). Earlier, he worked as an artist, and most recently has been making fifes from bamboo.

Academic publications can be found here. An article I wrote on harvesting lightning for electric power in the peer-reviewed journal Renewable Energy is here.

The Wikipedia article on harvesting lightning energy is here, and includes mention of a paper I wrote on the subject (Reference 6; Accessed 9 September 2014). Another article that includes a quote from that paper is here.

The Winkle Institute website is here. A blog post I wrote about this project is here. The beautiful image of lightning was found on Flikr. Lightning image credit: Steve Hayward (Creative Commons License).