New long-lasting formulation of Bti/Bs larvicide is a potential effective tool against larvicide resistance Aedes aegypti and potentially effective against all Zika virus vectors. The objective of this project is to test the effectiveness of FourStar slow-releasing larviciding in reducing Aedes aegypti population and the duration of its effectiveness, in comparison with temephos and Bti alone formulation.

The current Zika virus (ZIKV) epidemic is unprecedented, with estimated over one million cases across 38 countries. Since there is no medicine or vaccine available, vector control and personal protection become the sole options. The Aedes mosquito tends to bite during the daytime, which makes personal protection difficult. Larval control using larvicides has been successful in South America. However, these mosquitoes can quickly develop resistance to these larvicides which compromises the effectiveness. An EPA-approved new long-lasting bacterial insecticide that combines Bti (Bacillus thuringiensis Israelensis) and Bs (Bacillus sphaericus) is available in the USA. We want to compare the effectiveness of this new formula to the traditional larvicides.

Zika virus epidemic is a highly significant public health problem, and new interventions are urgently required to stop the spread of epidemics. In our opinion, controlling mosquito larval populations is the best way to control the spread of Zika Virus. Current microbial larvicides are not effective because mosquitoes develop resistance. With a long-lasting microbial larvicide we would be able to provide sustainable control and target all potential Zika virus vectors. This project will conduct a comprehensive evaluation of the effectiveness of the new formulation vs. traditional larvicides. If this works, the goal is to use this larvicide in the field to prevent Zika spread.

The experiment is simple. We want to determine the effectiveness of the new long-lasting Bti/Bs combination larvicide compared to the traditional chemical larvicide, temephos, and the biolarvicide, Bti. We will be measuring pupation rate, adult emergence rate, and duration of effective period of each larvicide. Outcomes will be compared using a one-way analysis of variance (ANOVA). Relative reduction in adult emergence rate for each larvicide formulation will be a calculated against control groups

The budget consists of 1) purchase of larvicides (minimum quantity), 2) mosquito rearing supplies, and 3) laboratory assistants. UCI insectary and laboratory are free, as well lab supplies such as lab coats, gloves, shoe covers, distilled water, labeling tapes, pens, mesh and bug-dorm to cover the microcosms, etc. Laboratory work will be maintained by UCI scientists and students. UCI faculty and scientist will set up the experiments. Students (part-time) will help with daily monitoring of mosquito survivorship and data recording, this is essential for the evaluation of the effectiveness of long-lasting Bti/Bs on Zika vector control.

I am really excited for this project. I want to know if this new long-lasting formulation of Bti/Bs larvicide is effective in reducing the Stegomyia (before Aedes) aegypti population, because I have known about a lot of St. aegypti poulations resistant to the larvicide Temephos from my country.

Lorena Isabel Orjuela González
Lecturer
Instituto Nacional de Salud
This project proposes an interesting approach to counter the spread of the Zika virus, by controlling the population of the Aedes Aegypti at the larval stage, by making use of a recently approved method. As in all such interventions, it is also important to consider the potential impact of controlling large populations of mosquitoes. One of the advantages of this research is that it has the potential to provide a solution more readily available, as compared to others that require longer studies. 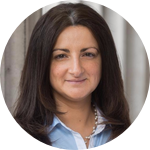 Science Reviewer
Susana Frazao Pinheiro
Director, Healthcare Management Programme
University College London
Controlling mosquito populations is an important method for diminishing or controlling vector-borne disease outbreaks, such as the current outbreak of Zika virus. Controlling populations at the larval life stage is generally much easier and more cost effective than controlling adult populations. Nonetheless, mosquitoes can develop resistance to larval control methods over time, necessitating the development of novel larvicides (substances which kill or prevent full development of mosquito larva). This project seeks to assess the effectiveness of a novel larvicide against the main vector of Zika virus, which is an important contribution to public health and control efforts for the current outbreak. 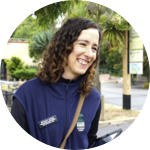 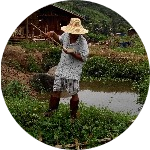 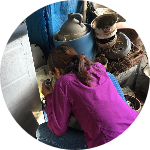 Ms. Xiaoming Wang, a Ph.D. candidate, whose research focuses on 1) how environment affects larval ecology of Aedes mosquitoes, and 2) development and testing of new formulation of larvicides against Aedes mosquitoes including Ae. aegypti and Ae. albopictus.

My research in vector biology focuses on mosquito larval ecology, insecticide resistance and population spatial distribution of Anopheles and Aedes mosquitoes. By integrating field ecology, remote sensing, GIS and modeling, my research has gathered critical data for larval control to be effective. Based on the analysis of larval and adult distribution, we have designed targeted vector intervention trials with indoor spray in high transmission areas in western Kenya highlands in 2005, which proved to be effective. We have also designed integrated vector intervention trials by combine microbial larvicide Bti/Bs with indoor pyrethroid residual sprays in western Kenya in 2010-2011, which shows modest effectiveness in reducing malaria transmission, likely due to mosquito resistance to insecticides.

My research in epidemiology focuses on how climate, environmental changes, topography, human migration, and insecticide resistance impacts malaria epidemiology. Our findings were cited in WHO’s world malaria report and were used as evidence in the formulation of national guidelines for malaria control in Africa and Asia.

The third line of my research focuses on anthropogenic environmental changes, such as land use change in Africa and urbanization in Asia, and vector-borne disease transmission. My research demonstrated that deforestation significantly increased the vectorial capacity of malaria in African highlands. Urbanization in Asia, particularly southern China, has also led to increased vectorial capacity for dengue vectors. These studies increased our understanding of the transmission of vector-borne diseases under the context of rapidly changing ecosystems.

To accomplish the objective, we propose the following experiments.

1. Larvicides to be tested: three types of larvicides with eight formulations

We expect that the three granule formulations will have similar effectiveness against naïve laboratory strain, however, field strain Aedes mosquitoes are highly resistant to temephos but 100% sensitive to both Bti alone and Bti/Bs formulation. In addition, Bti alone formulation is comparatively less effective against mosquitoes inhabiting the organically rich habitats such as in urban areas. FourStar briquette formulation will last long time than other formulations and works well in all habitats.

Application dosage will follow the recommendation of the manufacturer.

Experiments will be conducted in a laboratory environment at insectary of Program in Public Health, University of California at Irvine. Fourteen plastic buckets are filled with 20 liters of tap water, and are kept in insectary with 12:12 h day/night light control for 72h. Each formulation of larvicide will be applied into two buckets; two buckets are not treated with any larvicides, these two buckets will be used as control group. The original larvicide treated water will remain for the duration of the experiment without replacement, however 10 L of tap water will be added after each experiment. At days 3, 7 and then bi-weekly till week 16, 10 L of water will be taken from each bucket and added into three trays with 1 L each tray, three day old larvae of Aedes aegypti will be released into each tray. Larvae are provided with fish food every other day. Larval survivorship is observed daily until all die or emerged as adults. Number of pupae and adults produced will be counted for each tray each day. Ten replicates per treatment will be used at each time point.