Seasonal snow cover plays an important role in the hydrology of northern Arctic tundra environments. With the release of the stored snow during the spring melt season we see a large hydrograph response. Unfortunately, these streams are often snow-choked resulting in multiple meltwater pond and snow dams within the channel resulting in upstream floods and catastrophic dam failures. This study uses UAV technology to effectively locate and map the size and location of these snow dam features.

Seasonal snow cover plays an important role in northern Arctic regions, especially in Canada and the United States. During the melt season this stored water results in a large stream hydrograph response, accounting for nearly 75% of the stream's annual discharge. Certain issues arise when trying to quantify the spring freshet as these tundra stream channels are typically snow-choked resulting in large upstream meltwater ponding and frequent snow dam formations that cause delayed hydrograph responses and catastrophic dam failures. Due to the remote nature of these northern tundra streams regular monitoring and mapping of these snow dam features is nearly impossible as it requires very intensive field campaigns and the use of very expensive aerial imagery captured using helicopters

The complex pathways by which snowmelt water begins to form as steady streamflow is still only partially understood in northern tundra environments. Multiple channel formation steps occur as snow-choked tundra streams begin to form during the spring melt period. The spring freshet (discharge) is often influenced by snow accumulations within the channel in the form of drifts, hindering the streams ability to form a steady flow. As a result, large meltwater ponds occur upstream of these features resulting in a hydrograph that is inaccurate compared to hydrological models. This project will aid in the understanding of the formation, frequency and magnitude of these large meltwater ponds through high-resolution mapping techniques.

The goals of this project are as follows:

Integral to the completion of this research project is the acquisition of a medium-range unmanned aerial vehicle (UAV). Preliminary research shows that a consumer-grade digital camera mounted to a GPS referenced quadcopter provides the most desirable results for a project of this scale. To date, our research team has experimented with fixed-wing UAVs with promising results. Unfortunately, this technology is unable to capture the small-scale nature of the stream channel that is the focus of this study.

Once imagery is obtained an extensive post-processing of the imagery occurs. This process requires specialized 3D mapping software that creates an 3D orthomosaic from the UAV images.

The remaining portion of the budget is to help subsidize the research trip in the upcoming spring. Operating out of a small (and very,very remote) field camp is essential to this research. Data acquisition takes place daily during the melt period (mid-April to mid-June) requiring a large amount of resources. 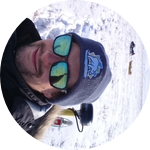 I guess this is where I tell you a little about myself. I am a first year MSc candidate at Sir Wilfrid Laurier University, Waterloo, Ontario. My research takes a multi-disciplinary approach to studying northern hydrology where I apply my knowledge of remote sensing, snow hydrology and climate modelling to better understand the hydrology of remote northern tundra environments.

I was fortunate enough to have the opportunity during the third year of my undergrad to travel to Inuvik, NWT. I found this research trip to be very educational and I learned a lot about science and myself. It was during this trip that I decided I wanted to further pursue a career in research. How can you not love field research, right? I can vividly remember being dropped off by a helicopter in the middle of the bare tundra during a rainstorm. It was while I was shivering so hard I couldn't even hold my pencil that I realized this was the life for me... I know it sounds backwards!

Anyways, it has been 2 successful field seasons since then and I have loved ever moment of it. This past spring we spent the spring conducting snow surveys and working on some experimental UAV work in our remote field site. Living in a tent on the snow for 6 weeks has given me an appreciation for scientists and researchers.

If we can raise the required money before the deadline I will take a polar bear dip in one of the Arctic lakes and film it with the same UAV!

Donations of $50 will be met with a written postcard from Inuvik, NWT

Donations larger than $100 will be met with the above, plus a copy of all raw and finalized data, and possibly an acknowledgement on any resulting peer reviewed papers