The Leach's Storm-Petrel is listed as a Species of Special Concern in Maine, and much of its ecology remains a mystery. The bulk of the North Atlantic population breeds in Newfoundland, where nest attendance has plummeted in recent years. The most recent population estimates for the Gulf of Maine are over 20 years old, and we have no information on the population trend. A repeat census will provide critical information on the conservation status of this shy little seabird.

Troubling declines in population estimates, adult survival, and burrow occupancy have been observed in Leach's Storm-Petrel colonies within their core breeding range in Newfoundland, raising serious questions on their current conservation status.

Storm-petrels are small dark seabirds that feed on plankton and small fishes out over the continental shelf edge, far from land. During breeding, they dig burrows or nest in deep crevices among boulders on remote coastal islands, which they only visit under the cover of darkness. All of these attributes make them difficult to study, so we know relatively little about their ecology. They are also notoriously difficult to census, which is why we have so little data on their population size and trends.

A survey of storm-petrels breeding at the two largest colonies in the Gulf of Maine (Great Duck Island and Little Duck Island) was carried out in 1995 by the Maine Department of Inland Fisheries and Wildlife, which provided a population estimate for the region. We know nothing about what has happened to this population over the intervening decades (the same period in which things have really changed in Newfoundland colonies).

Establishing the population trend for Leach's Storm-Petrels in the Gulf of Maine, at the southern edge of their breeding range, is a priority for federal and state management agencies looking to assess their current conservation status.

In this project, we will revisit the Little Duck Island colony (with the express permission of the landowners, the National Audubon Society) and repeat the survey, following similar methods to the 1995 survey. In doing so, we will provide the first information on the current population trend of Leach's Storm-Petrels breeding in the Gulf of Maine.

Surveying will take place during the breeding season in 2017. The colony island will be divided by parallel transects, running north-south. Burrows will then be counted in circular plots placed at intervals along the transect. In a separate plot, nests will be monitored for activity by placing grasses over burrow entrances and examining them for disturbance over following few days, providing an estimate of burrow occupancy.

Surveying storm-petrels is a tricky business and requires a considerable amount of time on the ground counting burrows across the colony islands in a systematic manner. The colony islands are remote and landing can be dangerous at times, thus, boat transport must be carefully planned and handled by experienced boat captains.

Funds will be used to support the time for experienced seabird biologists on the ground and transport to and from the island. A few key equipment items are required to carry out this census, including surveyor's measuring tapes to measure out transects and identify study plots on the ground, and GPS units to collect this data digitally for later mapping in GIS.

This proposed project would go a long way in helping the wildlife community assess the current status of nesting petrels in Maine. The Leach’s Storm-petrel is listed as a Species of Special Concern in Maine because of their vulnerability to extirpation. Based on current knowledge, over 90% of the State’s nesting petrel population nests on just two islands, one being Little Duck Island. We have no new data on the status of petrels on these islands as no surveys have occurred there in over 20 years. I fully endorse this project. 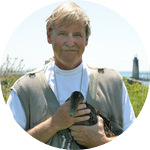 Brad Allen
Bird Group Leader
Maine Department of Inland Fisheries and Wildlife
Maine Coastal Islands National Wildlife Refuge highly endorses this petrel survey on Little Duck Island. There is a critical need to determine the current abundance and distribution of petrels within the Gulf of Maine. Historically, this island supported 30% of the state population but no surveys have been conducted in 20 years. Dr Stenhouse is uniquely qualified to conduct this survey given his past research on petrels in Newfoundland, where colonies have recently undergone significant declines. 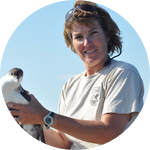 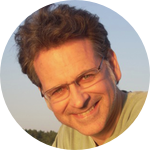 I am the Marine Bird Program Director for the Biodiversity Research Institute (BRI), based in Portland, Maine, and have over 25 years of experience in avian ecology and conservation. My passion for seabirds and remote islands was forged on the rugged west coast of Scotland, where I grew up.

During graduate research at Memorial University of Newfoundland, I studied the habitat use, reproductive success, and predation risk of Leach's Storm-Petrels breeding in a large Newfoundland colony. As part of that work, I spent hundreds of hours crawling through dense brush (what they call 'tuckamore' in Newfoundland) looking for the cryptic burrows of storm-petrels. That intense experience left me with a special place in my heart for these gentle little birds.

With your help, we can get some critical data that, for the very first time, will establish the population trend in Leach's Storm-Petrels breeding in the Gulf of Maine.

For more about the Biodiversity Research Institute, see http://www.briloon.org/.

Leach's Storm-Petrels are small planktivorous seabirds that nest in remote island colonies and forage on small fish and crustaceans far out at sea over deep waters. The bulk of the Atlantic population breeds in islands off of Newfoundland, and forages out on the Grand Banks. Birds breeding in Nova Scotia have been recorded traveling over 2,000 km on a single foraging trip. The ecosystem of the region has seen dramatic changes in recent decades, however, with oceanographic perturbations and over-fishing potentially reducing plankton availability.

These small, shy birds are also susceptible to high predation by large gulls that also nest on colony islands, and can take a serious toll on breeding adults each year. They try to reduce the risk of predation by only visiting their colonies during the hours of darkness, which makes estimated their numbers extremely difficult.

As well as facing threats at their breeding colonies, Leach's Storm-Petrels migrate across vast distances, increasing their risk of exposure to various causes of mortality, including contaminants, oil spills, changes in prey distribution, etc. Recent studies have shown that Leach's Storm-Petrels breeding in the Northwest Atlantic migrate as far as waters off of South Africa.

So, despite being relatively abundant globally, Leach's Storm-Petrels are exposed to many ecological and environmental pressures throughout their lives. Establishing trends is difficult for this species, yet critical to assessing their current conservation status, especially in light of observed declines at the large Newfoundland colonies.

For a short video introduction to the Biodiversity Research Institute, click here... https://www.youtube.com/watch?v=UUXz4-Q-NTo&feature=youtu.be