A Teflon-coated frying pan is an example of how you can chemically modify a surface to be non-stick. On the other hand, our pan’s surface is physically modified with micro/nanoscale structures to give comparable non-stick performance. Even with a material that is normally wetting (or sticky) with water!

Teflon (aka PTFE)-coated pans comprise a majority of the cookware market and are well-known for their non-stick functionality for cooking. However, the chemicals embedded within the coating may pose a health risk at high temperatures, especially those achieved during certain cooking conditions. Many consumers depend on stainless steel cookware because of its reputation for the healthiest, non-reactive type of cookware you can find. However, it lacks the non-stick attributes of Teflon-based cookware. This is where Omnioff comes in. We aim to develop a stainless steel pan that exhibits those non-stick features and continues to offer its inherent toxic-free cooking.

We decided to take on this endeavor as we envisioned the spectrum of potential commercial applications for non-stick, metal-based products. Using a combination of microfabrication and electrodeposition techniques, we have generated such reentrant microstructures using only metal materials through our patent-pending process. Below is an SEM image taken of our first iterations of copper structures electrodeposited on a gold substrate.

Your support will be crucial for subsidizing the expensive fees for the required equipment and materials in the Microfab research facility on UW campus. There are numerous variables to optimize the surface properties. This has not been possible for us working part-time on a shoe-string budget, because the optimization process requires many iterations. With your support we can offer everyone from moms and dads to professional chefs a safer alternative to non-stick cooking in just a few years. 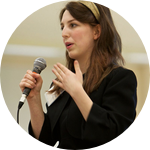 Nick Wang received his B.S. in Chemical Engineering at the University of Washington. He partook in the upbringing of the student-run UW Biodiesel Cooperative, serving primarily as Lab Director amongst the executive board. On the side, he serves as assistant to the head chef (dad) at his family's Chinese restaurant in Redmond, WA, the Golden Chopsticks. Kathryn and Nick worked together as co-founders of the UW Biodiesel Cooperative.

Nick Wang received his B.S. in Chemical Engineering at the University of Washington. He partook in the upbringing of the student-run UW Biodiesel Cooperative, serving primarily as Lab Director amongst the executive board. On the side, he serves as assistant to the head chef (dad) at his family's Chinese restaurant in Redmond, WA, the Golden Chopsticks. Kathryn and Nick worked together as co-founders of the UW Biodiesel Cooperative.

Supporting the non-stick cookware project, "OmniOff", and proud of it!

The funding meter just got flipped!

Guessing Game- Can you spot the mushroom?

As you've heard from Kathryn previously (from the video), we design the metallic surface with tiny mushroom-like structures such that it physically repels liquids. The characteristic size of these structures are on the sub-micro scale, smaller than the thickness of the average human hair (See below). 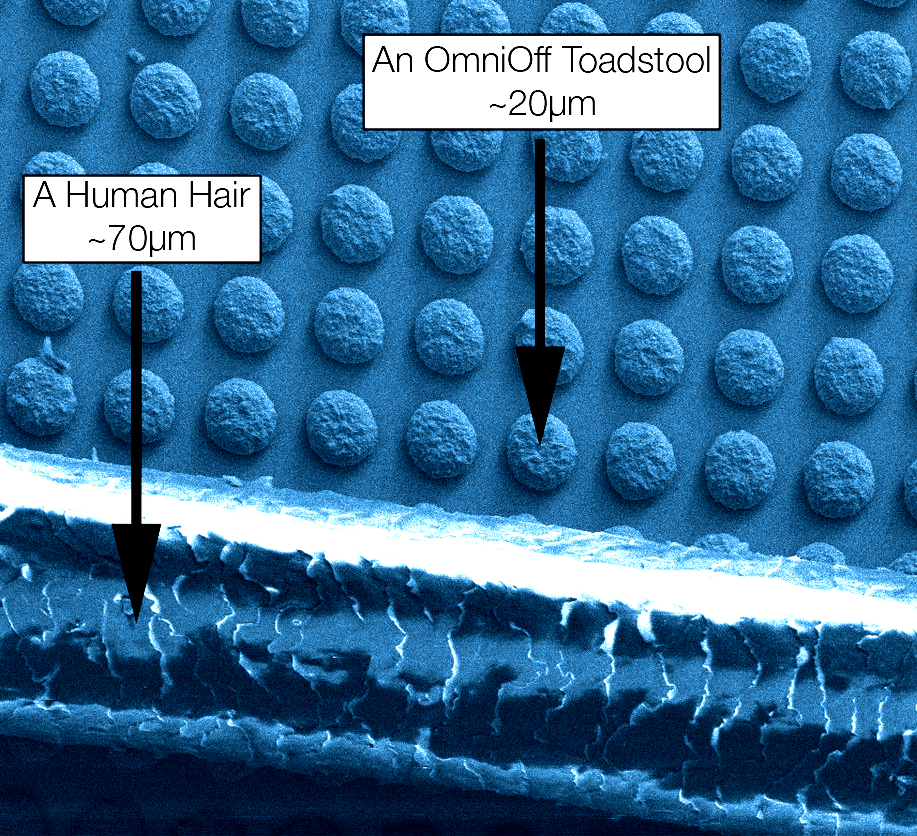 What's important about the geometry of these structures is that there is a big head on top of a small stalk. With a uniform arrangement of these tiny structures, the liquid will wet the structures (as seen in graphic below) such that the air pockets that form below the heads of the mushrooms will act to suspend the liquid. 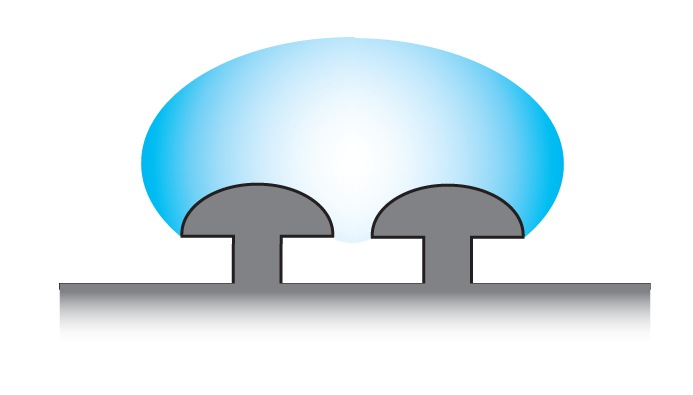 In essence, the contact area between the liquid and the solid surface is minimized, allowing the liquid to bead up and roll around freely, much like how water acts on a Lotus leaf:

This behavior is known as the “Lotus Effect” , where water beads up on lotus leaves and easily rolls around with the smallest perturbations. This is a prime example of a superhydrophobic surface. Such an effect is achievable with sub-micro and nanoscale structures on the surface, which manifest as pod-like structures on the lotus leaf [see below]. 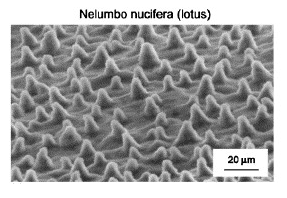 We have gained a substantial amount of traction through various college-wide student competitions. In January 2012, we took the Grand Prize Award at the SEBA Science and Technology Showcase, which gave us $1000 further our research. 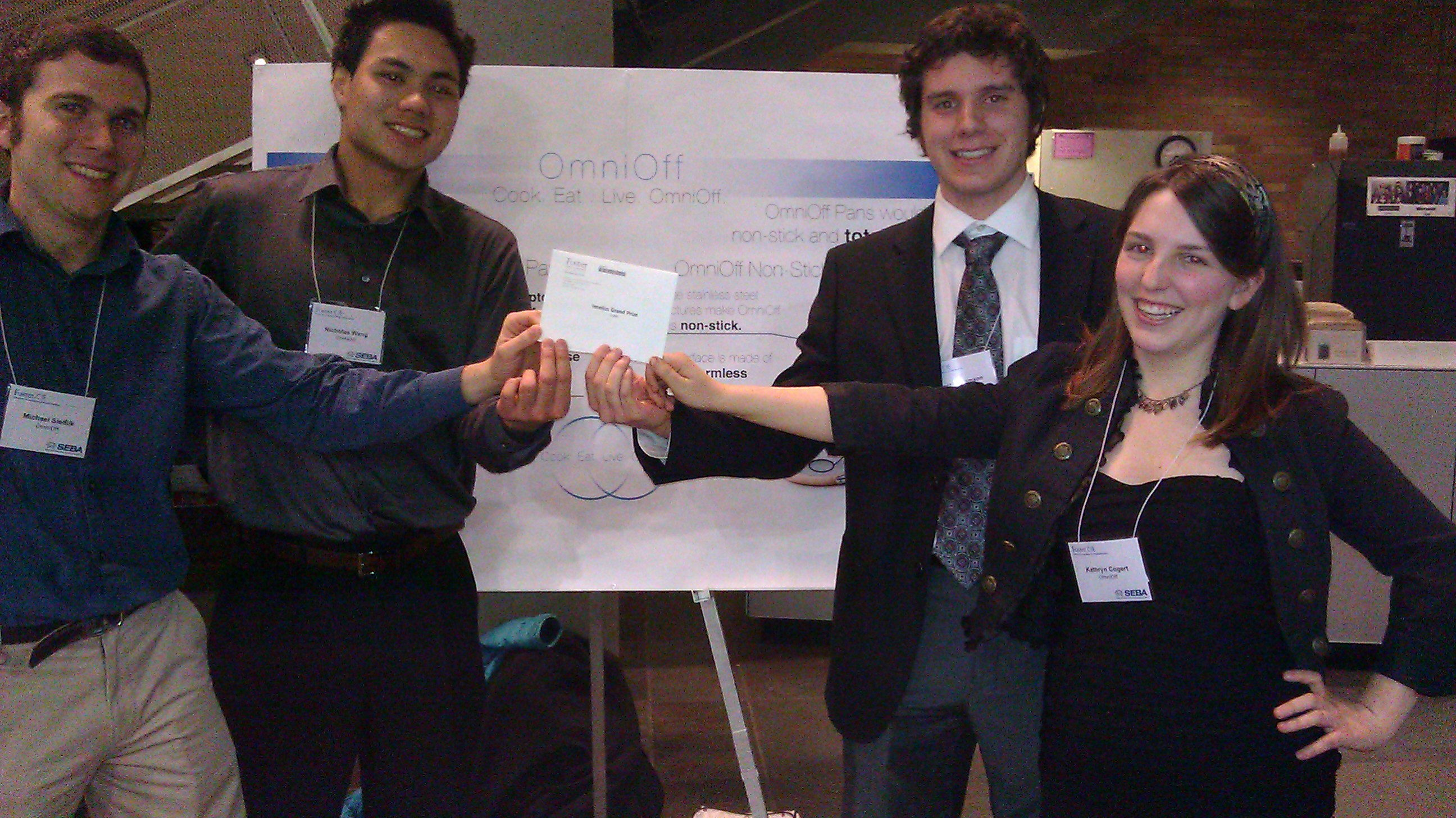 Our progress on both the technology and commercial potential was recognized as we won the Honorable Mention Award at the UW Environmental Innovation Challenge, which raised another $2500 worth of prototype funds to help sustain our efforts.

If you'd like to contact us directly, feel free to email us!
Nick Wang: nickwang.n@gmail.com
Kathryn Cogert: cogerk@gmail.com