For palaeontologists, the South African Karoo is legendary, not only for its appealing wilderness, but mostly because of its great fossil discoveries. A 200 million year old skull or skeleton can pop up below every single step you make! Although vertebrate fossils have been known in the Karoo for more than a century, its exploration is far from complete and new species are discovered on almost every expedition. This project aims to explore the oldest terrestrial deposits of the Karoo.

Because of its relative abundance of fossils, the South African Karoo serves as a basis for dating rocks of Permian and Triassic age worldwide.

It is also the only place in the world that documents the ecological effects of three mass extinctions: the end-Guadalupian (260 ma), Permo-Triassic (252 ma) and end-Triassic (201 ma ) extinctions.

Also the Karoo documents one of the earliest terrestrial ecosystems and hosts the most distant ancestors of tortoises, dinosaurs and mammals. Indeed the Karoo is internationally famous for its superb record of therapsid fossils which chronicle, in remarkable detail, the ancient origins of mammals.

All these make Karoo palaeontology crucial for understanding the origin of modern biodiversity and the ongoing 6th mass extinction.

We will prospect the oldest terrestrial deposits of the Karoo to elucidate life on land during the middle Permian. While the most iconic Karoo fossil taxa (dicynodonts, gorgonopsians, dinocephalians) are well documented in more recent parts of the basin, the fauna in the lower stratigraphic levels remains unexplored.

Our project focuses on exploration of this ancient neglected fauna through fieldwork to collect fossils and describe new species, study the geology to understand environmental change, and discover volcanic ashes for zircon dating.

The project has the potential to re-write the early evolutionary history of many important animal groups, study the most ancient terrestrial ecosystem in the southern hemisphere, and understand the causes of the Guadalupian extinction.

We wish to bring a team of 8 researchers and students from around the world to the oldest rocks of the South African Karoo, in the districts of Merweville, Sutherland and Beaufort West, to prospect for fossils. The fieldtrip will take place at the beginning of 2020 and will run for 14 days. The aim is to find fossils from lower down in the stratigraphy, identify them, determine their exact stratigraphic position, and understand middle Permian biodiversity on land. Exact zircon dating on volcanic ashes will help constrain the age of these horizons and enable faunal comparison with similar-aged deposits around the globe. South African students will be trained to field techniques relating to Karoo palaeontology and its heritage to ensure the future of the discipline in the country.

Exploratory fieldwork is time-intensive, and collecting high-quality data requires a continuity of research funding and focus. Fieldwork is the cornerstone of exploration and the starting point of our endeavour. This fieldwork will provide the raw material (fossils and volcanic ashes) for our research.

This project is critical to our larger project of understanding biodiversity change on land during the Middle Permian period and the effects of the end Capitanian extinction 260 million years ago.

The Karoo is the premier field area for work like this, and this project promises exciting new results on the early history of vertebrates. Bruce and his team are the best in the world at this work, and always come back from the field with more than expected. 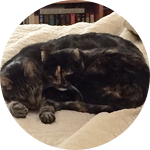 Douglas Erwin
Senior Scientist
Prof Rubidge is a world renowned expert on the Mid-Permian terrestrial ecosystems of western Gondwana and as Director of the Centre of Excellence in Palaeosciences is well-positioned to lead, and ensure success of this research project, the results of which will be of interest to vertebrate palaeontologists worldwide. 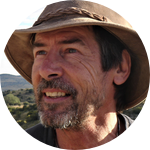 Roger MH Smith
Prof.
Evolutionary Studies Institute
The Karoo of South Africa is a priceless resource for vertebrate palaeontology in the late Palaeozoic, and still has so much to offer. These field projects provide the raw material of science, data, and so are crucial to advancing scientific understanding of evolutionary events such as the Capitanian mass extinction. Prof. Rubidge and his team has been working in these parts for many years and is one of the great forces in the field. 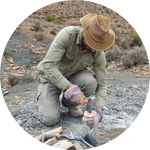 Michael Day
Dr
Natural History Museum, London
The Karoo fossil record is a key resource for understanding major mass extinction events and the evolution of the ancestors of mammals. Professor Rubidge has a proven track record of making important discoveries through his fieldwork and is certain to be successful. The project is also an important opportunity for training the next generation of paleontologists in field techniques. 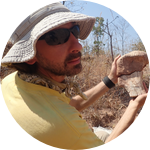 Kenneth D. Angielczyk
Dr.
Field Museum of Natural History
Prof Rubidge and his team visit the Karoo each year in search of the ancient creatures that roamed the floodplains of South Africa over 260 million years ago. Every trip has been extremely productive, yielding many new fossils and leading to cutting edge research on the evolutionary significance and biology of these animals, the mid- and end-Permian extinction events, and the continued refinement of the biostratigraphy of the Karoo Basin. Your money will have a direct impact on our understanding of the past. Please support this worthy cause! 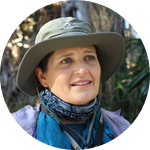 Rose Prevec
Dr
Albany Museum
The Karoo biostratigraphy project run by Prof Rubidge and his team is the cornerstone of palaeontology in South Africa and deserves to be supported so that it can continue. He has trained many students and has assisted researchers from all over the world. Results have been key to understanding basin formation, the evolution of vertebrates and the past climate. The work in not complete and should continue! 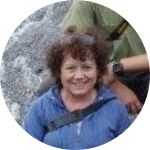 Marion Bamford
Prof
Evolutionary Studies Institute
Dr. Bruce Rubidge’s work in the Karoo Basin is critical to our understanding of the end Permian mass extinction, as well as the early evolution of mammals and reptiles. He and his highly collaborative team have a proven record of finding new and interesting fossils and publishing their results in a timely fashion. Finally Dr. Rubidge’s project trains the next generation of field paleontologists, ensuring the long term health of paleontology in South Africa. 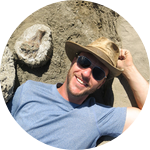 Tyler Lyson
Curator of Vertebrate Paleontology
Denver Museum of Nature and Science
This project is crucial for understanding past mass extinctions, a topic that has the utmost relevance in today's world in which we are experiencing the 6th major mass extinction. Professor Rubidge is one of the top scientists in the world and the best for studying terrestrial middle Permian ecosystems and the end-Guadalupian mass extinction. He has and continues to train new generations of budding palaeontologists and thus forms a very important part of succession planning in South African palaeontology. 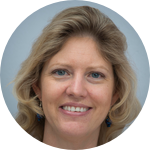 Jennifer Botha
Dr
National Museum, Bloemfontein
The South African Karoo Basin is unique in its continuous sequence and fossil richness of Permian-Triassic terrestrial vertebrates. Professor Rubidge is a world-leading export in studying the evolution of these animals and their ancient paleoenvironments. He has particular expertise in investigating evolutionary patterns and the impact of mass extinctions, sich as the end-Guadalupian one. The proposed project contributes to these studies and promises new insights into the early evolution of terrestrial vertebrates. 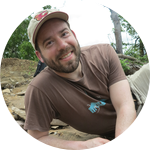 Jörg Fröbsch
Professor
Museum für Naturkunde and Humboldt-Universität zu Berlin
With over 3 decades of research experience in the Permian deposits of the Karoo Basin, Prof Bruce Rubidge is eminently qualified to lead this project. The research focus is on the lower stratigraphic horizons of the Karoo Basin and will fill the gap in terms of our understanding of Permian biodiversity, and more specifically provide much insight into the Guadalupian extinction. 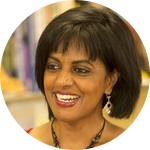 The fieldtrip will take place around February-March 2020.

Preparation of the fossils will take about a year, but this excursion will result in 1 paper by June 2021. This trip will likely deliver new species of animals which will be described as soon as they are prepared, by June 2022.

Publication of the first results 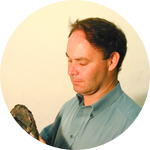 University of the Witwatersrand
View Profile

Professsor Bruce Rubidge is the Director of the National Centre of Excellence for Palaeosciences in South Africa. He earned his PhD in geology and palaeontology. He has ongoing scientific collaborations with scientists from numerous countries, his research interests are broad and he has a passion to understand the most distant origins of mammals and unravelling middle Permian ecosystems.

9 Lab Notes Posted
We are making progress with the discoveries made on our...
How to find fossils in the Karoo? Video
untitled