We provide the first evidence of leader-directed social learning biases supporting theories linking prestige-biased learning and leadership, but also find learning biases include dominant individuals and do not strongly predict leader status relative to other traits, presenting new challenges to such theories.

The high colinearity of the diverse traits measured here suggests that each of the domains of leadership traits that we investigated — cognition, sociality, productivity, reproduction, and dominance — are potentially important in understanding variation between leaders and non‐leaders. To systematically overlook any of these domains may be a severe methodological limitation and this strong positive covariation of most leadership traits warrants further investigation.

Prestige, dominance, and social learning among leaders in an egalitarian society

How has leadership changed over human evolution; what mechanisms underlay our species' leader-follower psychology? This research will explore these questions and speak to the importance of leadership during the precarious transition to modernity. I propose to conduct a preliminary investigation of political leadership, and replicate established findings on leadership, among the Chabu, one of the last hunting and gathering populations in Ethiopia (or elsewhere).

The Chabu live in Ethiopia's Southwest highlands. Some population estimates note no more than 1,500. Deforestation from encroaching agricultural programs (e.g. coffee) are threatening the Chabu's traditional livelihoods. Linguists have been working with the Chabu for several years, however, very little systematic research or ethnographic description have been conducted (published) among this group.

Also, in establishing myself as a researcher in the area I will be able to assist the Chabu in their goals of attaining the status of an officially recognized ethnic group with the Ethiopian government. The Chabu are open to researchers working with them and understand outside attention can help them accomplish their goals.

Global leaders make decisions in small groups behind closed doors that affect the lives of millions of people on a daily basis. The psychological underpinnings of leadership have likely remained largely unchanged in our species. By understanding leadership and followership in small-scale society we can make recommendations for wider leadership structures to be more consistent with our evolutionary history.

I will explore the qualities and functions of leaders for both sexes. Semi-structured interviews with men and women of diverse ages will allow the Chabu to illustrate their cultural model of leadership. Additionally, I will collect ethnographic data through participant observation in a variety of domains and work to identify which individuals achieve influence by what mechanisms. I will relate these data to other psychological and physiological variables.

This study will also attempt to replicate an important finding from Cheng et al. (2010), that found personality is related to dominance and prestige; dominance is associated with narcissism whereas prestige is associated with agreeableness. This theoretical model is widely used in leadership studies.

As a graduate student early in my program, field work is a must in order to produce successful applications for larger dissertation funding grants. This preliminary study will produce publishable data, but also serve as a springboard for future funding opportunities. I have already received an internal departmental grant but require additional funding.

Throughout this research I will rely on the services of a guide/translator. After landing in Addis Abba I will need to travel to Jimma to meet them. From Jimma, it is roughly a few days travel to the field site.

I will rely on six male informants and six female informants to provide peer ratings on a number of measures for all individuals in the local community. These informants will receive compensation for their time consistent with local standards.

Additionally, all community members will be compensated for providing other data such as height, weight, and grip strength. 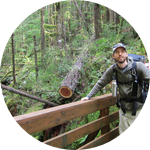 After pursuing long-term independent travel in SE Asia and volunteering on organic farms through WWOOF Japan, my wife and I discovered our passion and curiosity for human cultural diversity.

Upon returning to the states I pursued academics with fervor and received a BA with highest distinction in anthropology and psychology from the University of Nebraska-Lincoln in 2012. I completed a senior honors thesis Status and Prosociality in Egalitarian Societies and am a former McNair scholar.

Currently I am a PhD student at Washington State University on the Vancouver campus working with Ed Hagen. My MA thesis was a cross-cultural study testing theories of leadership against the ethnographic record using the eHRAF (an online ethnographic database). My research interests include leadership and followership, status competition, collective action, and psychological adaptations for small-group social dynamics.

I love the PNW and enjoy year round gardening, camping, and am a huge Cornhuskers fan.