Quinoa's recent popularity in Western diets can have dramatic impacts on the farmers of Bolivia. Bolivia is the world's leading exporter of the grain and a tenfold increase in world prices have resulted in significant economic benefits for farmers. I will examine how different ways of engaging in the global market place different pressures on farmers to homogenize crops, to the detriment of biodiversity and farmer food security.

Bolivia is a small landlocked country in South America nestled in the Andes where the people are primarily farmers growing crops that are adapted to the extreme climate conditions of the highlands. One of the most important crops, a grain called quinoa, has been grown on the Bolivian altiplano for thousands of years. The extreme environment and complex topology of the region forced farmers to specialize quinoa varieties to withstand the freezing temperatures, droughts, rugged landscape and short growing season characteristic of the region. This specialization has resulted in extensive biodiversity with over 3000 distinct varieties.

Recently, it has attracted global attention as a new superfood. High quality complete proteins and a richness of micronutrients make this ancient grain desirable for health-conscious Western consumers and for international agencies working to end world hunger. International attention and greater world demand have produced significant economic benefits for Bolivian farmers as prices have increased 10 fold in recent years.

Farmers growing undesirable quinoa varieties and small-landholder farmers who are unable to produce the minimum volume are thus excluded from world markets. Additional pressures on farmers are created by climate change. Most farmers depend on glacial melt from the Andes to feed crops throughout the season. As global temperatures climb, Andean glaciers are rapidly disappearing to the detriment of farmers downstream. Experts predict that these life-giving glaciers could disappear entirely by the end of the century.

Farmers must have the freedom to choose the cultivars that are well-suited to the microclimate of their land. Local knowledge of the landscape can be integrated with expectations of climate change to ensure that farmers plant varieties most likely to survive and produce high yields.

How do smallholder farmers deliver quinoa harvests from remote farms in the highlands to vibrant economic centers where they become available to world demand, ending up on American grocery shelves? Several modes of getting harvests to market are available to farmers. First, they may sell their crops to cooperatives, that demand a minimal volume and only buy specific varieties that may not be in the farmers' best interest to grow. They may go through retailers that offer unfair prices and transport crops to Peru where it is mixed with Peruvian quinoa and sold at a premium. Finally, intermediaries work with farmers to offer fair prices. Often, these intermediary market people are women.

Andean women occupy a traditional position in the market and are well-known for their ability to exert considerable power in the marketplace. Andean market women play an important role as intermediaries in the market for quinoa and can serve as a lifeline to poor farmers. They perform a critical function purchasing small quantities of quinoa from smallholder farmers and selling it in urban markets where it becomes available to global demand. Additionally, when they return from large economic centers where they sell quinoa to enter the world market, they return to small communities with fresh products that might otherwise be unavailable to rural families. This increases food security and improves diets of poor farming villages.

Quinoa farmers in the Andes stand to gain the most from the research I am proposing. By better understanding the choices available to them in terms of market integration modes, including fair-trade cooperatives and independent market intermediaries, farmers can make choices that will secure the greatest profits from global demand. Non-profit and non-governmental organizations may also benefit from this research in the formulation of new policies that encourage the farmers that they work with to take biodiversity into consideration when making planting decisions.

My project is premised on ideals of social justice. The idea that everyone is entitled to a fair income and the opportunity to improve their lives. The right to food is also foundational to this work, asserting that everyone has the right to secure an adequate and healthful diet for an active, productive life. In light of recent climate and conservation debates, this project also takes as a guiding principle the inherent value of biodiversity and the benefits of biodiversity to resistance and resilience to climate change. As market pressures on farmers build and farming conditions become ever more uncertain, it it vital to aid farmers in securing higher incomes so that they might build better capacities to confront a changing climate and preserve the biodiversity of their ancestors.

My research proposes that Andean Market Women's willingness to purchase all varieties of quinoa in any quantity allows farmers to make choices about both cultivar crop selection and the quantity of quinoa they wish to grow. I hypothesize that this has three effects: First, it allows smallholder farmers to access the world market and capture profits from quinoa’s recent popularity. Second, it protects quinao biodiversity by encouraging farmers to grow many varieties. Third, it can create greater food security by allowing farmers to plant subsistence crops on small land parcels in addition to quinoa as a cash crop.

Ultimately, my research will determine the best mechanism for small holder farmers to engage with global markets and will disseminate this information to stakeholders so that they might take advantage of quinoa's popularity.

The primary emphasis of my research is on field research. I will be interviewing farmers and market women in select communities to determine the functioning of supply chains any how this impacts biodiversity and food security. Because research is based in Bolivia most expenses are travel related. I hope to spend at least 8 weeks conducting interviews. Stretch budget is requested for supporting an extension of this time so that more subjects may be interviewed and thus a larger sample may be taken. I anticipate that more time will produce more robust results. 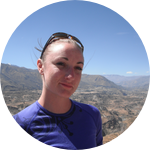 As a graduate student at Penn State, I am beginning my dissertation research and hope to begin field work this summer. Thorughout my undergraduate work at University of Colorado Boulder my studies focused on international affairs, Latin America and methods of international development. My final project examined improved water and sanitation systems in peri-urban areas in Peru. Talking with impoverished residents, it became clear that their primary concern is securing enough to eat and until that can be accomplished, they have little capacity to address improved water, sanitation, or other common development goals. I also discovered that Andean women play a critical role in the markets and exert considerable power in the marketplace. These experiences shaped my current research goals. The foundation of my research is rooted in values of social justice, socioeconomic equity, food security, and the preservation of cultural knowledges and practices.