Helmeted hornbills are a conservation icon of the Asian tropical rainforest. These large birds are of major ecological and cultural significance, but increasingly threatened with extinction. They need healthy tropical forests to survive, but forests are disappearing and poaching for their ivory bills makes thing even more worse! Urgent action is needed, starting with a conservation and threat assessment.

Helmeted Hornbills (Rhinoplax vigil) are unique bird. Their hooting and loud laughing calls resonated in the rainforest, from Thailand in the north through the Malay Peninsula, and the islands of Sumatra and Borneo. As large fruit eaters, they play important ecological roles by dispersing the seeds. As tree hollow breeders, they need large, old trees that have developed cavities that fit to their body. However, these trees are targeted for timber. Ironically, they are also hunted for the ivory of their bills, for carving and in Chinese medicine. The issue rarely features in conservation discussions and the governments are not taking action, because few facts are known. Urgently actions are required to understanding the scale of the problem by assessing their conservation and threat status.

Currently, 1.2 million hectares of Indonesia forest is disappearing each year, rapidly reducing the amount of hornbill habitat. Even more worryingly is the number of hornbills killed. My preliminary investigations revealed that in 2013 alone about 500 adult Helmeted Hornbills were killed each month, or some 6,000 in one year. These figures are supported by the 1,111 Helmeted Hornbill heads that were confiscated by the Indonesian authorities between 2012 and 2014. In the market, one head is worth for hundred dollars. For a slow-breeding species like the Helmeted Hornbill, which produces one young per year, these mortality rates cannot be sustained.

I kindly request your financial support to allow me to visit some remote areas in Indonesia to assess the present situation of hornbill occurrences and threats. Most of my requested budget will be used for travel. I will use some of the funds for media documentation (photos and video) for future awareness purposes. I will allocate a small amounts to salary and fees of local counterparts, payment for park admission, etc. My own time input to this project will be pro bono. 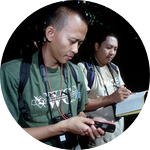 I'm a person full of zing and passion for landscape ecology, wildlife management, systematic spatial planning, and environmental sustainability to make humans and nature coexist in harmony. I started my carrier as a Wildlife Biologist for Wildlife Conservation Society - Indonesia Program. I've been involved in more than 15 years of wildlife research specializing in hornbill ecology. In 2008 I completed a Master of Science in Forest Resources, University of Georgia, USA by research on forest fragmentation effect to hornbill communities and hornbill habitat modeling. I'm also the founder of Indonesia Hornbill Conservation Society, Co-founder of Rekam Nusantara Foundation and Director of the Indonesian Ornithologist Union (2011-2016) and Co - Chairman of the Asian Hornbill Network.

Race with extinction, likely for Helmeted hornbill
Field work its about to start...

All 13 Indonesia hornbill species are protected by Indonesia government and IUCN listed Helmeted hornbill as Near Threatened (NT). In West Kalimantan, Indonesia, Helmeted hornbill has become a proud provincial symbol that represents the bravery and elegant of Dyaks tribes which still dominate the province. Surprisingly, that politic and cultural recognition cannot stop threats to hornbill population

Adult female Helmeted hornbill having a feast with fig fruits