Thank you to our backers for $5600! We actually need up to $24000 - please keep donating! In the fall, most birds must pause to refuel at stopover sites where they consume fruits that are rich in antioxidants and fat. The ability of a bird to refuel may affect its ability to continue or successfully complete a migration. Our project will examine how condition (e.g. antioxidant and fat stores) on stopover may affect the behavioral decisions birds make during migration.

Migratory stopover sites are crucial for birds to rebuild energy stores, and the time a bird spends on a stopover can influence the timing and success of its overall migration. Additionally, during flight, birds have an elevated metabolism leading to an increase in the production of a byproduct we call reactive species. Reactive species can cause damage to cells if not balanced by an antioxidant system. During the fall, birds that normally eat insects generally turn to seasonally abundant fruit as a cheap and easy resource for dietary antioxidants and fat. I want to know whether birds that have more fat and/or antioxidants in their diet can spend less time on a stopover site, and whether they are more likely to depart in a seasonally appropriate (southerly) direction.

Migration is a particularly vulnerable time of year for songbirds. Birds are facing novel habitats, exhausting exercise, and are encountering more predators and human modified environments (Sillett and Holmes, 2002). Understanding how condition (how much fat and/or antioxidants a bird is able to store) influences behavior can help us to better understand their needs during this susceptible time. Further, physiological and behavioral actions during spring and fall migration can have consequences that spill over into the winter or breeding seasons (Finch et al., 2014; Legangneux et al, 2011), and how the antioxidant system responds during migration may have overarching consequences for these birds, and for other organisms that undergo periods of intense endurance exercise.

We will set up an automated radio tower on Block Island, Rhode Island, a stopover site for birds during migration. We will manipulate the condition of three species of birds (Blackpoll Warblers, Hermit Thrushes, and Red-Eyed Vireos) with different migration patterns.

We will use mist nets to capture these species. We will then give the birds a diet rich in fat and/or antioxidants, or a diet without extra fat and/or antioxidants. After several days in captivity, we will attach Nanotags to the birds and track them using the MOTUS network to determine whether these diets affect how long they stay and in which direction they leave Block Island.

We hope to present this research to the public and at scientific conferences, and to publish in peer-reviewed journals - we will keep you updated!

The money you donate will help to purchase Nanotags to track songbirds during migration. Using these tags and automated radio towers we can remotely track several species of birds at once. As there is a network of radio towers spanning from Canada to South America, we can track our birds on stopover and as they travel south. Last fall we successfully tracked Myrtle Warblers during migration. This coming fall, we want to build on that project and manipulate the diets of 3 species with differing migration strategies (Blackpoll Warblers, Hermit Thrushes, and Red-Eyed Vireos) and use Nanotags to determine whether condition drives the behavior of songbirds on migratory stopover sites.

With $5,600: We can buy Nanotags for Blackpoll Warblers

If we reach $16,800: We can buy tags for all 3 species (Blackpolls, Red-eyed Vireos and Thrushes)

Clara did her Master's project at Ohio State. She is a bright young scientist with tremendous potential. She approaches her projects with intelligence, enthusiasm, and resolute tenacity. I strongly endorse this project. Joe Williams 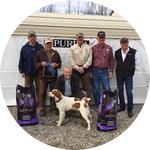 Joe Williams
Professor
Ohio State University
I am really excited for this project! While we know some about bird migration, we still don't know enough! This research question will help answer some critical aspects of bird migration and Clara and Scott are absolutely the best folks for the job! I can't wait to see what we learn from their work! 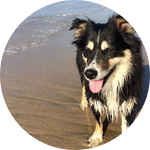 Ana Jimenez
Assistant Professor
Colgate University
Clara and Scott's project poses one of the most cutting-edge questions in migration ecology today--do antioxidant levels affect birds' stopover decisions? I worked with Scott and Clara on similar questions regarding bird physiology and migration over the past five years during my Ph.D. and am excited to see the outcome of this work. Their elegant experimental design has the potential to transform our understanding of the physiological challenges that wild songbirds face during migration. 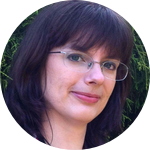 Dr. Megan M. Skrip
Science Communicator
NC State University Center for Geospatial Analytics
Bird migration is one of the most fascinating feats in the natural world. I am so excited for this project because it uses new technologies with classical experimental design to address one of the most relevant topics in the bird world. It has been a joy to work with Clara and Scott on other avian research projects,and I can't think of better people to connect bird physiology and stopover ecology. 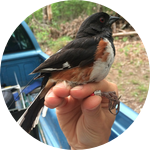 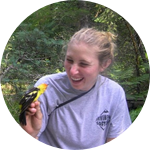 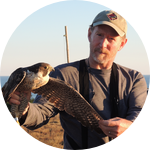 Hello! My name is Clara Cooper-Mullin and I am currently a PhD student at the University of Rhode Island. Although originally from New York, I earned my B.S. degree from Kenyon College in Ohio, and a M.S. degree from The Ohio State University.

In college I landed my first true field job in New Jersey which allowed me to assist on a smorgasbord of bird related projects including examining nest temperatures of Least Terns, and monitoring the success of heron breeding colonies. From there, I was hooked! Since then, I have worked on a project banding birds in Arizona, examined Northern Cardinal feathers in Ohio, looked at nest success rates of Savannah Sparrows in the Bay of Fundy, and the importance of protected areas and flooding patterns for bird populations in the Okavango Delta, Botswana. At The Ohio State University, I examined how the metabolic rate of muscle cells from Japanese quail was linked to their growth rates.

Although I have been lucky enough to study birds in many contexts, I am most fascinated with the incredible feats of endurance undertaken by migratory songbirds. Some of these birds are doubling their body weight and then flying hundreds to thousands of miles without stopping. It would be as if a human woke up one morning, ate as many cheeseburgers as they could to double their body weight in a day, and then ran from Canada to Florida without pausing! I truly want to know how the physiology of songbirds allows them to undergo these journeys without harming themselves or their cells, and how their physiology could drive their behavioral decisions during this life stage.

This funding will be essential for me to complete my PhD thesis, and will help me to answer some of the questions surrounding the physiology of birds in migration!

My interest in birds has required me to travel the globe to more places than Clara : ) If you are interested in learning more about my past and current other projects check out my website http://mcwilliamslab.com

First, we want to thank all donations to the project. Second, as donations of $250 or more will fund a nanotag for a bird as well as it's MOTUS registration fee, these generous contributors will receive a picture of their bird and personalized information on the movements of that bird around Block Island after the field season is over. Additionally, you will have the option of naming the bird you adopt. 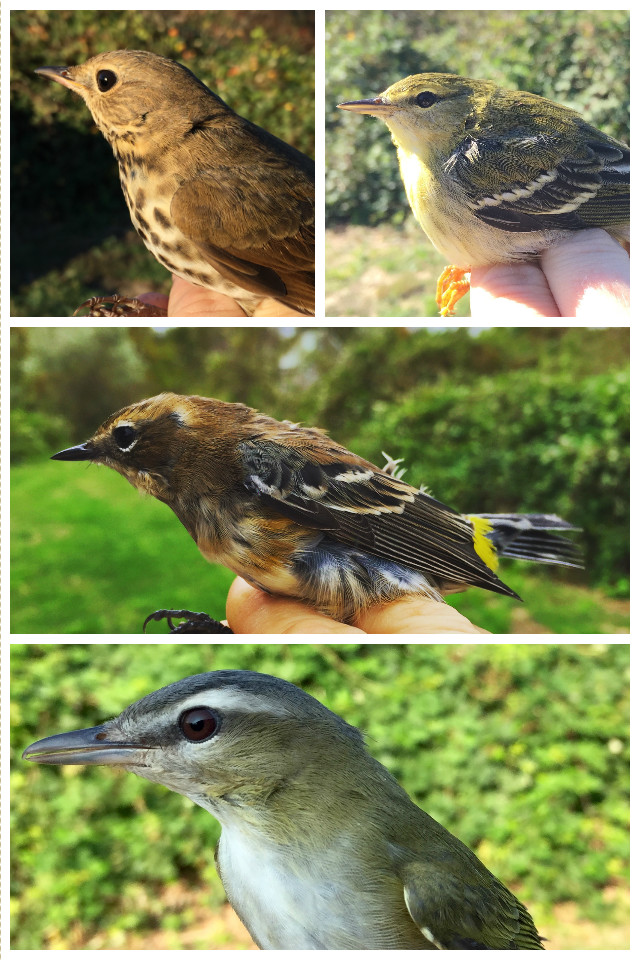 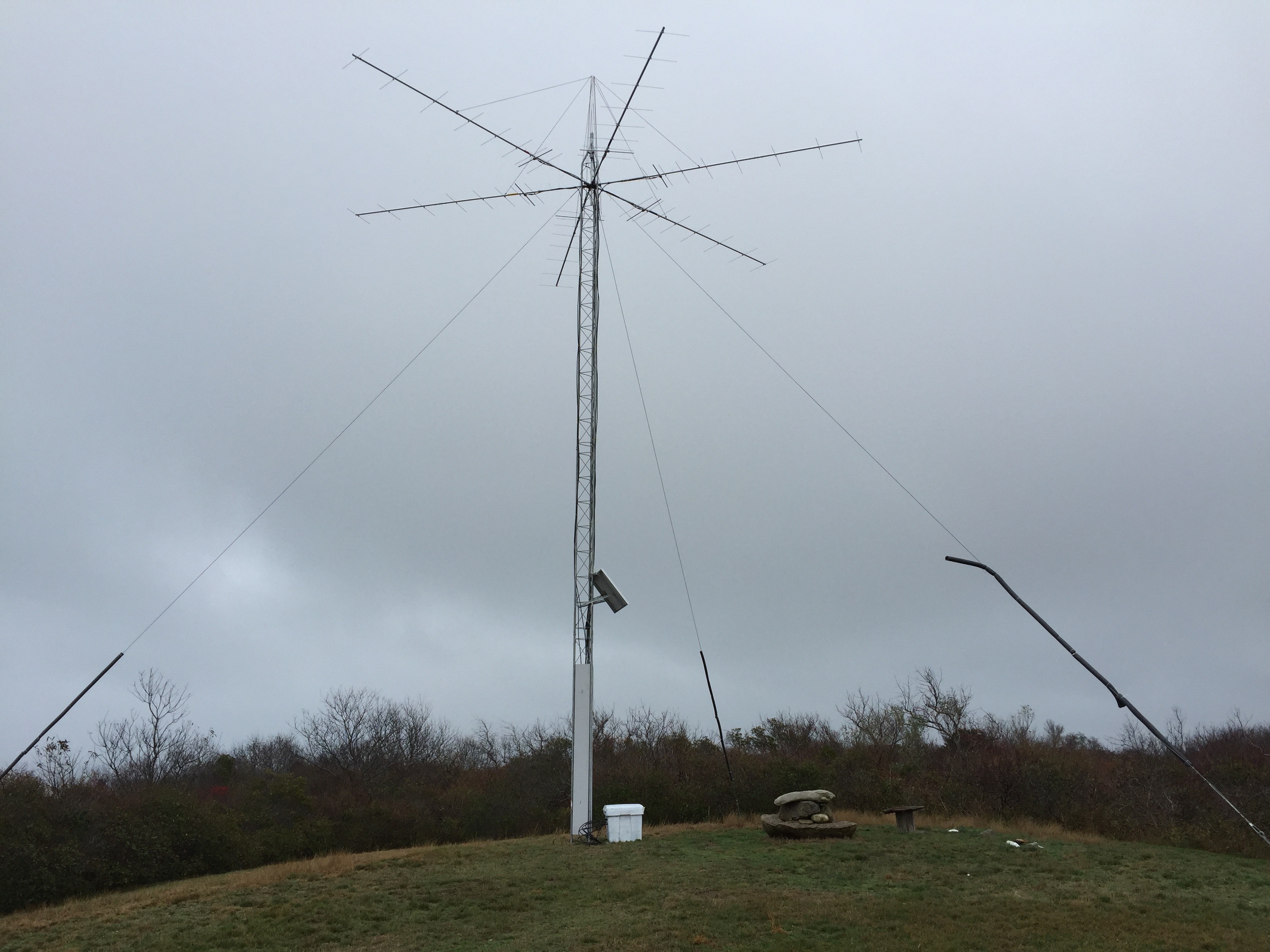